MURFREESBORO – At a special news conference held Tuesday on campus at the Jesse Helms Center, Chowan University president Dr. M. Christopher White honored the accomplishments of current university Vice President/Director of Athletics, Dennis Helsel, on the eve of Helsel’s retirement and at the same time introduced the man who will succeed Helsel at the helm of the Athletics Department. 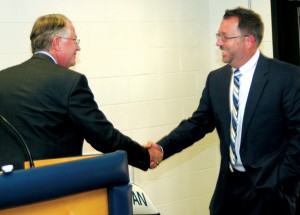 Chowan University President Dr. M. Christopher White (left) greets Ozzie McFarland at a Tuesday press conference at the Helms Center. White is recommending McFarland to the university’s Board of Trustees to succeed Dennis Helsel as the school’s next Athletic Director beginning January of 2014. Staff Photo by Gene Motley

Ozzie McFarland, currently an instructor in the Sport Studies and Physical Education department at Chowan, was introduced by Dr. White at the press conference as the man White will recommend to the school’s Board of Trustees as the university’s next vice-president and athletics director.

McFarland, who is also pursuing a Doctorate in SS-PE from East Carolina in Greenville while still teaching and lecturing at Chowan, brings a great deal of experience to the table, having competed as a student-athlete at his alma mater of Gardner-Webb University as well as serving the Bulldogs as an athletic administrator.

“I didn’t hire him here a year ago for this purpose because I didn’t think he was going to stay coming from the western part of the state,” Dr. White said. “But he’s made this (his) home. He wants to be here because he likes this place. He likes the people, he likes the culture, and that helps.”

Dr. White also emphasized that Helsel will remain in his post until the end of December.

Before making the announcement of Helsel’s successor, Dr. White called the 30-year veteran athletic administrator up before the overflow crowd assembled and lauded his accomplishments during Helsel’s eight years in Murfreesboro.

“The athletic department has made significant progress,” the president said. “I might remind you that the transition (to NCAA Division-II) was made here as quickly as possible and that was because of Dennis Helsel.

“Under his leadership this school and our athletes have garnered all types of conference (CIAA) and national honors,” Dr. White continued. “We’ve begun new sports, brought back old ones, renovated buildings and built new tennis courts, and we’ve gone from zero athletic scholarships to $1.8 million.”

To honor Helsel’s success and contribution to Chowan athletics and the institution as a whole, Dr. White revealed that the university’s Board of Trustees has unanimously named Helsel as Director of Athletics Emeritus, an honor never before bestowed on an athletic director in Chowan’s history.

As he humbly accepted the gracious applause from the assembled crowd, Helsel’s emotional response was obvious.

After this announcement, Dr. White followed up with a list of the accomplishments of Helsel’s successor.

McFarland played baseball in Boiling Springs for the Bulldogs and graduated in 1982. From there he served the school in athletics from coaching to communications and from teaching to administration; and was inducted into the school’s athletic Hall-of-Fame in 2006. After 30 years with Gardner-Webb, McFarland came to Chowan to teach in 2007.

“I realize the senior staff here is second to none,” said McFarland. “When I combined that with Dr. White it was hard to turn down.

“The best thing an administrator can bring to a department is to leave it better than they found it,” he continued. “That’s what Dennis has done and I look forward to working with him.  I expect our athletes to not represent themselves well but to also provide an example to others.”

McFarland closed with a pledge to put a great effort into fund-raising, and issued a challenge to the Chowan alumni and boosters.

“I want you to consider financial contributions that support an outstanding group of young people,” he stated. “We need you to be involved, we need your support.

“I will do everything within my ability to help us achieve greatness,” he concluded.

ELIZABETH CITY – As a District Attorney, Frank Parrish was often praised for the respect he paid to those crossing... read more