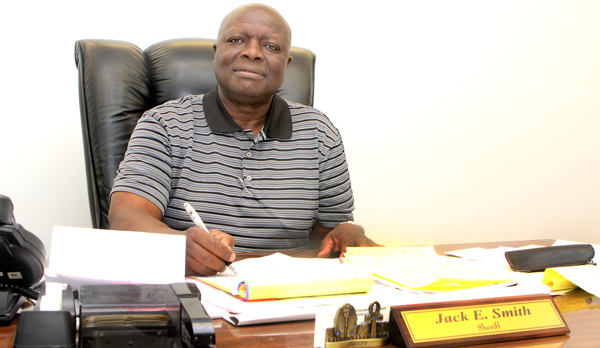 JACKSON – Timing is everything.

Even as far back as his early days patrolling the roads of Northampton County as a North Carolina Highway Patrol Trooper, Jack E. Smith aspired to one day become that county’s “top cop.”

Today, Smith is living that dream, appointed in early August to fill the unexpired term of Northampton Sheriff Wardie Vincent who retired in late July.

“I’ve prepared a long time for this; I’ve always wanted to be the Sheriff of this county,” said Smith. “It’s all about waiting until the time is right.”

That “wait” turned into a 40-year process.

Born and raised in Martin County (Hamilton/Oak Grove area), Smith graduated in 1970 from West Martin High School. With the war escalating in Viet Nam, Smith joined the Marines at the age of 18. He had one tour of duty in Viet Nam.

“I actually wanted to join the Air Force, so I went to visit the recruiter and found out he was on vacation,” Smith recalled. “The Marine recruiter was there and asked me to visit with him. I was going to get drafted anyway, so that’s how I wound up in the Marine Corps.”

Back home, Smith turned to law enforcement as a career. His first “badge” was with the Ahoskie Police Department (1973-75) under then Chief Donald Hibbert.

He changed law enforcement uniforms in 1975, his maiden year as a North Carolina Highway Patrol Trooper assigned to Northampton County; the first African-American to hold that position in the county. He lived in Woodland, and later in Rich Square, at that time.

“When I joined HP, (Trooper) Ray Worley was my training officer,” Smith said. “I’ll never forget the day – May 14, 1985 – when he was murdered after making a traffic stop on I-95. We worked the same shift; we were good friends. I had just left him that night, meeting him in Weldon where he administered a breathalyzer test on a driver I stopped for DWI on the Interstate. I went home after that, but it wasn’t that long before they called us all out to help with the search for the gunman.”

Four suspects, all involved in an earlier theft in Pender County, were ultimately arrested after that manhunt involving over 500 state, local and federal officers from North Carolina and Virginia.

“You never know when you put your uniform on if you’ll see the end of your shift,” he said. “Most of time this is a very rewarding job; you feel you are contributing something to safeguard the public.

“It takes a special person to do this type of work,” Smith added. “In today’s society, law enforcement is even more of a unique job to have, due to the peer pressure and in some cases having to deal with the backlash from the public. Some think we have too many police officers; I believe we don’t have enough.”

When comparing the past with the present, Smith said one of the most noticeable changes is parents unable to control or discipline their children.

“We receive calls almost daily where a parent asks for our help because their child is misbehaving or not minding their parents or grandparents,” Smith said. “That didn’t happen back when you and I were younger; that’s because we were taught how to respect our elders.

“Another thing that’s different is the presence of law enforcement officers in our schools on a daily basis,” he continued. “You and I didn’t see them when we were in school, not unless they were there for career day or a ballgame. Nowadays schools can’t function without an officer on campus. That’s a sign that some kids are out of control. Having to assign deputies to a school takes away from the manpower we need out on the streets. Plus it’s an added burden to the taxpayer; not only do we pay taxes to help pay for teachers, principals, and buildings, but now you add a full-salary deputy to that, along with all the benefits and a vehicle. We have three deputies assigned as School Resource Officers. The start-up cost alone for that, when you figure in salaries, benefits, vehicles and training, is around $300,000. You have to have it….society today accepts that.”

In December of 1994, Smith was promoted to the rank of Lieutenant and transferred to Fayetteville.

Less than a year later, Smith transferred to Troop C in Raleigh, still as a Lieutenant. There he handled administrative duties in a district that covered 12 counties and was home to 250 NCHP troopers and support staff members.

“That job really helped me to prepare to what I’m doing today as a Sheriff,” Smith said. “I learned a lot about budgeting, supply purchasing, logistics, management skills, training and the like. You also learned how to share resources with other state and federal agencies.”

Even after retiring from NCHP in 2001, Smith wasn’t destined for a rocking chair. Instead, he was hired in January of 2002 with the Nash County Sheriff’s Office. Six years later, he accepted the position as Chief of the Town of Enfield Police Department.

In early 2010, Nash County Sheriff Dick Jenkins, a Conway native, encouraged Smith to return to his department, this time as Chief Deputy. Smith accepted the offer, going to work on March 1 of that year and remained there until he retired on Aug. 1, 2013.

“It was during that last stint in Nash County that I began to map out my plans to seek the office of Northampton County Sheriff,” Smith said. “In June of 2011, I moved back to Northampton County. Of course that all came before Wardie decided to retire early, so the timing was right to put my name in the hat to become interim Sheriff.”

“There were about 100 sworn deputies and about 60 detention officers in Nash County that I had to oversee,” Smith said. “Plus I learned a lot from Sheriff Jenkins.”

As far as his future plans, Smith has one thing on his mind – to be elected Sheriff of Northampton County.

“I would hope that the citizens of this county are seeing the job I’m doing here and give me their support when election time rolls around next year,” Smith said. “I want to finish what I’ve started. With me, they’re going to get a lot more than they pay for. I give it 110 percent every day.”

He not only encouraged the county citizens to call when they need assistance or to supply a tip, but to also do so when they think their Sheriff’s Office can do a better job.

“Let us know when you think we’re not doing something that we should do,” he stressed. “If we’re doing it right, let us know that as well.”

As far as lowering the county’s crime rate, Smith said that goes hand-in-hand with ensuring there is enough evidence to gain a successful verdict in the courtroom.

“You can’t guarantee a favorable verdict in court unless we have the evidence for our prosecutors to use to win a court case or to accept a plea,” Smith said.

“It’s a different element, a different mindset of people we deal with today, especially some, not all, young people,” he added. “The behavior today of some young people towards adults, or others in authority to include law enforcement, teachers, preachers, the courts, the judges and the like, is something I never believed would happen. It’s very sad to see the loss of respect that people, in general, have for other people. The level of respect has eroded.”

Smith blamed a majority of youth-related problems on drug and gang activity.

“We’re no longer seeing those problems in just Raleigh, Durham, Charlotte and Washington, DC; we’re seeing them here in Northampton, Bertie and Hertford counties,” he said.

No matter the situation, Smith promised that his deputies will respond to calls just as quickly as possible.

In Smith’s favor, he inherits a staff that boasts of a long record of public service.

“Since I took the role of interim Sheriff, very little change has taken place within the ranks of the mid and upper level officers on this staff,” said Smith, who oversees a department of 60 employees. “I don’t believe that a person needs to be changed or moved due to political reasons. Changes need to be confined when they deal with work performance or for conduct reasons.”

On the subject of unsolved cases he has inherited – particularity those of two missing men, Daniel McCoy Moses and Shawn Cornelius Alston – Smith said those two cases remain high on the radar screen of he and his staff.

“I’ve known the Moses family for a considerable number of years; I didn’t live that far from them after I moved to Rich Square back when I was a State Trooper,” he noted. “Both cases remain under investigation; this office continues to work with the SBI in an effort to solve these cases. We still encourage anyone with information on either of these cases, no matter how small that information is, to call this office. A lot of cases are solved when tiny bits of information are all pieced together. Someone out there knows what happened, how it happened. I encourage them to come forward so we can help these families have some closure.

“My heart aches for the Moses family, for the Alston family,” he added. “I’ve made an effort to contact those families at least once a week. We want to solve those cases just as badly as these families do. We are doing everything we can legally do at this point. As long as I’m the Sheriff here, I promise we will never give up on these cases.”

In closing, Smith said solving crime is a two-sided deal.

“One of the biggest things we run into, especially in breaking and entering and larceny cases, is that the victim, the majority of the time, can only describe what was stolen. I would encourage all citizens to have serial numbers, model numbers, VIN numbers of their personal property. That is a tremendous help when we recover the stolen items and can link them back to a particular crime,” he closed.

Smith said he would use this newspaper on occasion to publish more tips on how citizens can protect their property.

AULANDER – The final countdown is on. First Med will begin Emergency Medical Service (EMS) in BertieCounty at midnight on... read more