AULANDER – The final countdown is on.

Monday, at its regular meeting held at the Aulander Community Building, the Bertie County Board of Commissioners approved a temporary lease for the First Med base location in Windsor and received an update on the progress the company has been making in the past two months. 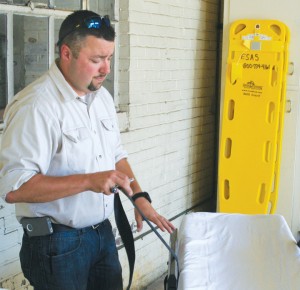 On July 15 the Commissioners awarded the county EMS contract to First Med and then signed the contract on Aug. 14 to provide that service to the citizens of Bertie County.

County Emergency Services Director Mitch Cooper informed the Board that while First Med will move into the current location of Windsor Rescue Squad on Dec. 1, until that time the company was requesting approval to lease space at Coleman Lumber Company for a period of 70 days beginning on Sept. 25 at a one-time lease fee of $1,200.

“We will have two units stationed at this facility,” Cooper told the Board. “I believe it’s a very good deal in the short term.

“We were looking for a facility that had showers, bathrooms, kitchen area, office areas and bedrooms and this office met every one of the needs to provide the housing for two crews for 24 hours a day,” he added. “We just want to go in for 70 days”

While the lease agreement was drafted by County Attorney Lloyd Smith, reviewed by County Manager Scott Sauer and e-mailed to all the members of the Board, Commissioner Rick Harrell acknowledged he had not read it, but pledged to do so by Sept. 25.

Commissioner John Trent made a motion that the Board approve the lease and it passed by a 4-1 majority.

Following that business on the agenda, Jeff White, Director of Business Development for First Med EMS, updated the Board by introducing Matt Leicester, the Director of Operations for Bertie County.

Leicester, who has served as a paramedic for over a dozen years in various municipalities across the state, most recently in Wake County, is a native of Hertford in Perquimans County.

Leicester said over 60 applicants had been interviewed for paid as well as volunteer positions with First Med and that of the 21 paramedic applications from Bertie County, 17 were completed.

“There were 15 that we interviewed,” said Leicester. “Of that group we hired 13 and all of them came through the medical certification clearance process on the paramedic level.”

Leicester gave credit to the EMS and EMT programs at Roanoke-Chowan Community College.

“We could not have done it without them,” he said, to the cheers of several RCCC personnel in attendance at the Board meeting.

Two of the First Med ambulances and one of the Quick Response Vehicles were available for the public and the Board to inspect at the Aulander location across from the Community Building.

“We have another one in Colerain with two more coming in the next week,” said Leicester. “They will be stocked with gear and ready to go for state inspection with the Office of EMS next week.”

Once everything passes state inspection, Leicester said there will be orientation for three days next week and after that they will be ready to begin on Oct. 1.

“I think it’s very impressive that you guys have stuck to your word to try to hire qualified Bertie County residents, please continue to do that,” Wesson said. “And don’t just think about the people when you’re staffing; we’ve got some great services, and businesses here.”

Trent thanked the town of Aulander for the service of its current ambulance and EMS system.

“You’re a pleasure to work with,” said Trent, “and an asset to BertieCounty.”

White closed by saying the Technical Scope of Practice (TSOP) certification done by RCCC was invaluable and that 40 of the 60 First Med hires were certified through the college. White also pledged a donation to RCCC’s EMS-EMT program from his company.

By Caroline Stephenson Correspondent WINTON – CADA got its answer, but perhaps not the one it was looking for. Sallie... read more