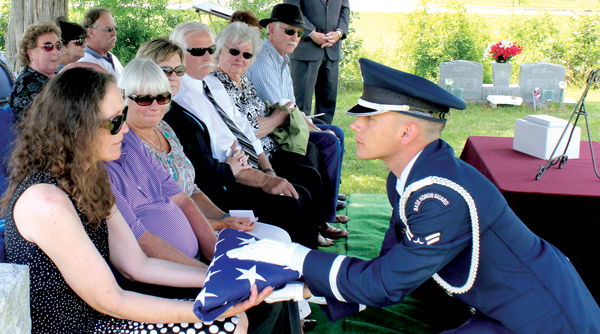 Lisa Renee Modlin, the daughter of the late Walker Randolph Modlin, accepts the American Flag from a member of an honor guard from Langley (VA) Air Force Base at the conclusion of a graveside service held in June at the Ahoskie Cemetery. Contributed Photo

AHOSKIE – From Walker Randolph Modlin, to Joe Howard, to Nick Brantley….men who once called Ahoskie as home served their country in peace and war.

Each possessed a fascination with flight. Modlin was a fighter pilot during the Viet Nam War, one a very few men to earn both The Distinguished Flying Cross and The Purple Heart. Howard was also a decorated war hero who served in Viet Nam before becoming a member of the famous United States Air Force (USAF) fliers and ambassadors, the Thunderbirds. He died in a 1972 crash while performing with the Thunderbirds during an air show in Washington, DC. A monument stands in his honor in No Man’s Land Park in downtown Ahoskie. Brantley’s young life ended in late September of 2005 when his Navy Seahawk helicopter went down off the North Carolina coast during a training exercise. A scholarship basketball tournament, named in his memory, has been held at Ridgecroft School, his high school alma mater, since 2006.

Perhaps it’s only fitting that the Ahoskie Cemetery is the final resting place for all three of these “country boy” heroes.

Modlin was the latest to be laid to rest, that coming in June of this year after the 78-year-old died at his home in Palm Coast, Florida. He was the son of the late Fletcher Hilton Modlin, a PFC during World War II, and Mary Callis Modlin, and graduated in 1952 from Ahoskie High School. There he was a member of the Indians baseball squad as well as the Varsity Club, was manager of the basketball team, drove a school bus, and was a reporter for “The Pow Wow” – Ahoskie High’s student newspaper.

After graduation, he enlisted in the United States Air Force (USAF) and received training to become a pilot. During his Air Force career, he flew various types of aircraft and received numerous awards and medals, including the Distinguished Flying Cross and The Purple Heart. The discipline and patriotism he learned in the Air Force never left him, as friends and family will attest. His two daughters, the now late Randi Lynn Modlin, and Lisa Renee Modlin of Palm Coast, Florida, both proudly followed in their father’s footsteps and served in the USAF.

After being honorably discharged from the USAF, Modlin continued his love for flying by working with the Alabama Forestry Commission monitoring wildfires from the air. He also explored other careers such as obtaining his license and working in real estate, while still enjoying flying airplanes. Upon retirement, Modlin traveled for several years throughout the continental United States in his motor home. He lived a few years in Holenwald, Tennessee before relocating to Florida.

But his true love was the “wild blue yonder.”

“The memorial service held on June 15 in Ahoskie was a fitting tribute to our family member and a military hero,” said Modlin’s niece, Janet V. Drinnon of Greenville. “A nine-member honor guard from Langley Air Force Base in Virginia came and conducted the military honors portion of the memorial service due to my uncle’s extensive and meritorious service.”

Modlin served in Korea, the Panama Canal Zone, Viet Nam, as well as in England and Germany while assigned to the prestigious Strategic Air Command.

That service to his country was none better illustrated than in what occurred in South East Asia in March of 1968. Perhaps it’s best for the Commander-in-Chief of that era to explain that time and place:

“The President of the United States takes great pleasure in presenting the Distinguished Flying Cross to Captain Walker R. Modlin for extraordinary achievement while participating in aerial flight as a Forward Air Controller in Southeast Asia on 10 March 1968. On that date, Captain Modlin supported friendly ground forces who were pinned down by heavy hostile weapons fire. Disregarding his own personal safety, he made numerous low level passes, marking targets with smoke rockets for eventual destruction by the strike aircraft. The professional competence, aerial skill and devotion to duty displayed by Captain Modlin reflect great credit upon himself and the United States Air Force.”

Even though Modlin basically “saw the world” from the seat of an aircraft, his final wish was to return to Ahoskie and have his ashes buried next to his father.

“Basically my uncle was a local boy, born and raised in Ahoskie, that returned home to his roots upon his death; that’s what he wanted,” Drinnon said.

She added that many long-time Ahoskie residents would remember Fletcher Hilton Modlin, who operated the Trailways bus station in town for many years before working at Mitchell Furniture Company prior to his death,    and his second wife, Lucy Leggett Modlin, also from the Ahoskie area.

“We had other relatives that also lived in Ahoskie until their deaths: Charles Lewis Callis, Bruce Callis, and Isabell C. Miller were siblings of Walker Randolph Modlin’s mother, Mary Callis Modlin,” Drinnon noted.

“Off we go into the wild sky yonder, keep the wings level and true”……..rest in peace and Godspeed to Walker Randolph Modlin. You are sharing sacred ground with the likes of two other local military heroes.

WINTON – A shade over 16 months after hiring a new director, the Hertford County Board of Health is searching... read more