‘We are here for you’ 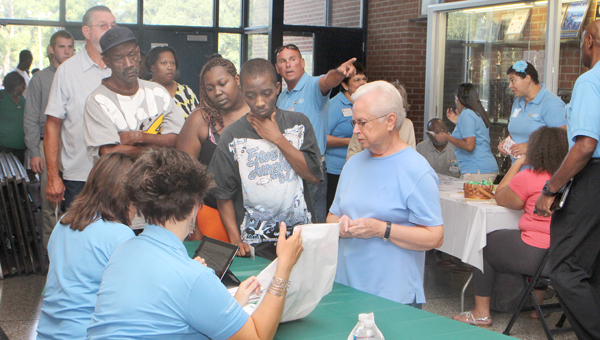 Roanoke Electric Cooperative members file through the lobby of the Hertford County High School gym on Saturday morning where they went through a registration process before taking part in the Co-op’s 75th anniversary meeting. Staff Photo by Cal Bryant

AHOSKIE – September 30, 1938 – 317 individuals became part of local history by joining as the charter members of what is now Roanoke Electric Cooperative.

While its membership has expanded to include in excess of 14,500 accounts and its miles of service lines have increased from 56 to over 2,000 stretched across six counties, one thing remains the same 75 years later – REC’s commitment to customer service.

With a standing-room-only crowd in attendance inside the Hertford County High School gym on Saturday, REC President and General Manager Curtis Wynn re-affirmed the electric cooperative’s management style that puts its members above all else.

“Being a part of a cooperative is similar to being a member of a family,” Wynn told the audience who were taking part in a special event to mark REC’s 75th year.  “As a matter of fact, we have the word ‘family’ as a part of our mission statement. The mission of our cooperative family is to provide safe, reliable and affordable electricity, while enhancing the quality of life in the diverse communities we serve.  Good families stick together in good times and bad.”

“However, there are several issues far beyond our control that are having a direct impact on your electric bills; now and for years to come,” he stated.

“Our business is changing in a number of ways,” Wynn continued. “Renewable sources of energy continue to become more practical and are being integrated into the way we do business; threats from malicious outside forces that might interfere with our ability to provide you safe, reliable and affordable power are growing, creating the need to detect and do away with cyber security threats.  Politically, less and less attention is being paid to rural areas by the majority of our lawmaking body in both Raleigh and Washington, DC.  Many of the tools we had in place to help stimulate growth and create jobs last year when I spoke with you are now gone.

“With that in mind, your board of directors, your management team and every employee at REC is at your service every day to carry out initiatives to help us operate effectively in this rapidly changing environment,” he added.

Wynn touted a series of “Straight Talk Forums” hosted by REC. To date, 22 of those forums have held where REC officials have met face-to-face with nearly 1,000 members and engaged in healthy dialogue regarding the industry, the impact that legislation and regulation have on the cost of electricity and things the local electric cooperative is doing to help its members deal with rising electricity costs.

“What’s causing the cost of electricity to rise,” asked Wynn. “It is a combination of aging infrastructure – did you know that we still have lines that are 74 years old – new regulations coming down from Washington, DC, and grid modernization efforts to meet changing consumer needs and expectations.”

Wynn said government regulations have gotten tighter and the timeframe to comply has gotten shorter.

“This means in some cases, we will not be allowed to wait 15-20 years; the government is saying make changes now or you will be violating the law. As new laws and regulations are put in place, we are being told to quickly upgrade an electrical system that it has taken us 75 years to build,” he said.

As for members being able to save on the cost of electricity (now a base rate of roughly $145 per 1000 kilowatt hours), Wynn said measures can be taken at home to accomplish that goal.

“We think that it is important that everyone understands the information we send you on your electricity bills,” he said.  “We have attempted to make sure there are no surprises about what you owe for electricity and that you are able to track how much electricity you use on a daily and even hourly basis. Having good information allows you to make the necessary adjustments when you see that your monthly costs are accumulating to be more than you can afford.  We encourage you to call us if there is anything you don’t understand about your bill.”

Wynn also touted REC’s Energy Efficiency program, arming homeowners with energy-efficiency tips, and cost efficient measures to help them lower their electric bill. Members can ask REC to perform an energy audit of their home from where cost savings and justification for performing energy savings repairs is made.

“We can identify and assist with applications to funding programs for renovations and repairs of dwellings (when applicable); work with you to coordinate the repair activities and procurement for qualified contractors; and we will track and report the benefits and energy savings produced through the repairs and renovations,” Wynn said.

Another cost-effective program to assist REC members is scheduled to begin in October. Wynn said the Energy Efficiency Loan Program focuses on homes that are wasting the most energy and have unusually high energy bills. Energy efficiency improvements can reduce energy use up to 20 percent.

“There are no upfront costs, and the low-cost loan is paid back on utility bill,” Wynn stressed. “The energy savings realized through this program should exceed the loan payment. Once the loan is repaid, those energy savings will still be realized every month, putting more money in your pocket.”

Other programs offered by REC include the Cooperative Connections Card (discounts offered to members on prescription drugs and eye care); and Sustainable Forestry and Land Retention strategies.

Wynn said being part of a cooperative means money is returned to the members on occasion ($8 million over the past 14 years).

“The numbers I showed you earlier about the rising power cost would be much worst if we were a company whose primary goal was to make a profit,” he noted.  “Fortunately, we are a cooperative and that is a tremendous benefit to you, because we – you and me – own this company. We enjoy the benefit of receiving Capital Credit payments. When we close our books at the end of the year and have paid all our bills, any excess money is called margins, not profits. We assign those margins to your account and designate them as capital credits based on your use of electricity during the year. When our financial conditions allow, your board of directors decide to pay you, the members, capital credits.”

Wynn added that throughout the year, REC also pays capital credits to the estates of deceased members.

“Unfortunately, there are many families who don’t know that they are entitled to these funds,” he said. “When families of our deceased members never come to the office and claim their relative’s capital credits payment, we are forced to send hundreds of thousands of unclaimed capital credit dollars to the State that were never claimed by families.  Help us be reminding your neighbors about this benefit they might be missing.”

In closing, Wynn stated the obvious – the electric industry faces a number of challenges.

“With your support, the support of our allied organizations, the collective wisdom of our board – which represents you very well, and the dedication of our employees, we are convinced that we can handle the challenges that face us today and the ones that will come our way in the future.

Among the highlights of the 2013 REC Membership meeting was selecting the winner of a 2004 Ford Taurus (one of the vehicles in the REC fleet that was taken out of service). Ten members were randomly selected as the finalists. Each chose a small box placed on a table. Inside each box was a “Matchbox” car of different colors. The box containing a white car was the winner and that box was chosen by Ernest Simpson of Tillery (Halifax County).

MURFREESBORO – It could be “sands thru the hourglass” as far as the extension of the beer and wine license... read more