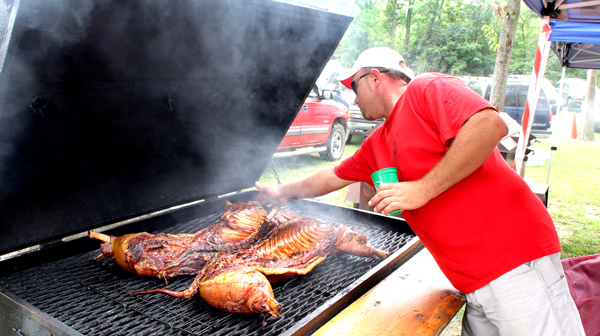 One of the chefs at the 2012 Backyard BBQ Cook-Off tests his entry for crispness prior to the judges making their rounds. The 2013 event is set for Sept. 13-14 at the Ahoskie Creek Amphitheater. File Photo

AHOSKIE – It’s a tradition rooted deep in the South – that of slow roasting a whole hog over a hot grill.

The result is some of the best pork barbecue known to man. It also comes with bragging rights….which chef has grilled the pork to perfection?

That question will be answered on Saturday, Sept. 14 when the Ahoskie Public Library hosts the 6th Annual Backyard BBQ Cook-Off, part of the festivities linked to Ahoskie’s Heritage Day Celebration, held at the Ahoskie Creek Amphitheater.

This year’s event is officially sanctioned by the North Carolina Pork Council (NCPC). The event is a cooking competition based on NCPC standards and regulations of a whole hog contest. Awards will be given for 1st, 2nd, 3rd place and showmanship. Cash awards, trophies and plaques will be awarded.

“Our competing BBQ cooks and their teams will start on Friday night, Sept. 13,” said Cindy Henderson of the Ahoskie Public Library. “A dozen or more teams of the best whole hog BBQ chefs in our area will fire up their pig cookers and begin that southern tradition of slow roasting pork. Cooking through the night, teams will be dreaming of capturing that first place trophy, prize money and bragging rights for the best BBQ in Ahoskie.”

NCPC judges will begin making their rounds of the cook sites at 9 a.m. on Saturday. They will closely inspect each entry, to include a taste test, and then compile their scores to determine the top three chefs.

After all the pork is judged, it will be finely chopped and used as the main menu item for a barbecue lunch to help feed the hungry crowd at Heritage Day from 11:30 a.m. until 2 p.m. on Sept. 14. Those plates, priced at $8 in advance or $10 on the day of the event, include all the traditional trimmings – potatoes, slaw and hushpuppies. Barbecue will also be sold by the pound. Tickets can be purchased from any Ahoskie Library Board Trustee or at the Ahoskie Public Library.

“We are once again asking local businesses and individuals to help us fund the event by becoming sponsors,” Henderson said. “Backyard BBQ Cook-Off sponsors will receive two BBQ tickets for each $100 donated; your name or business listed on the sponsor banner and team signs, and you will be supporting the Ahoskie Library Building Fund with your tax deductible gift.”

Henderson said volunteers to help prepare and serve the lunch are also needed. If interested, contact Henderson at 252-332-5500 or stop by the Ahoskie Public Library, located at 210 East Church Street across from Eddie Harrells Auto and Sports Store.

“Your support gets us closer to helping the town of Ahoskie build a new, larger library we so desperately need to better serve our community,” Henderson said.  “Please join us for a great day of cooking, competition and eating on Saturday, Sept. 14 for the 6th Annual Backyard BBQ Cook-off.”

To date, the annual event has raised almost $50,000 for the Ahoskie Library Building Fund.

JACKSON – Help wanted! Following discussion, centered on need and a revenue stream to pay for the position, the Northampton... read more