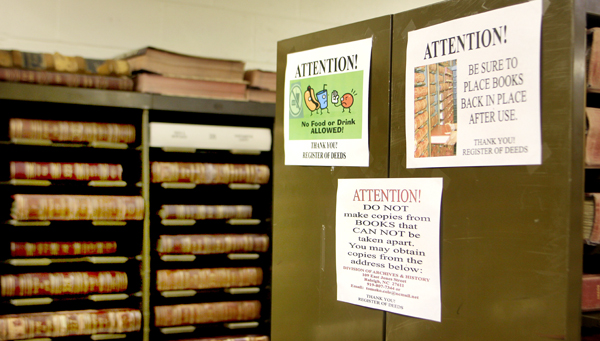 Those visiting the vault area of the Register of Deeds Office in Jackson are urged to abide by certain rules, to include refraining from eating or drinking. One local attorney questioned that rule. Staff Photo by Cal Bryant

JACKSON – It’s a small and simple sign, yet one that carries a loud and clear message.

Hopefully, all that view it from henceforth will heed the rules inscribed on several sheets of paper posted within the vault of the Northampton County Register of Deeds Office.

At Monday’s meeting of the commissioners, Pauline Deloatch, the Northampton County Register of Deeds, addressed the board in reference to the posting of those signs. The sign’s simple message asks those viewing the documents to refrain from eating or drinking.

“It was stated to me that I do not have the authority to tell anyone what they can or cannot do in the Register of Deeds office,” Deloatch said. “(I was told) it’s not your office, it belongs to the citizens.”

Deloatch said she placed a call to Charles Szypszak, Professor of Public Law and Government at the School of Government at UNC-Chapel Hill, seeking his opinion on whether she was within her rights to post such a rule.

In his email rely of Aug. 19, Szypszak stated, “You are the custodian of essential public records and have the obligation and authority to adopt reasonable rules and practices for safeguarding them and protecting user access to them. Rules intended to protect records and record systems from damage due to food and drink are common in record keeping and fully within your discretion as the custodian.”

“If anyone has a problem with any rule posted, I’ll be happy to refer them to this board,” Deloatch stressed.

Commission Vice Chair Virginia Spruill asked Deloatch how long has this (failure to abide by the rule) been an issue.

“It comes and it goes,” she replied, adding it was basically one individual who fails to adhere to the rule.

Commission Chairman Robert Carter asked Deloatch if the individual she was referencing was in attendance at Monday’s meeting, to which she responded, “yes.”

“I have not come to make this personal; I’ve come to let you, as a board, know that I’m elected to do a job and I’m there to do that,” Deloatch remarked.

“Have you received any opposition from other folks in reference to your rules and regulations,” asked Spruill.

Carter then asked attorney Charles Vaughan to comment. Vaughan serves as legal counsel to the Northampton Commissioners and was obviously the “culprit” in this “coffee gate” saga.

“I’ve practiced law for 48 years all over North Carolina at many, many Register of Deeds offices,” Vaughan stated. “I’ve never had the occasion where a request was made not to drink coffee in the Register of Deeds office except in NorthamptonCounty. So I do question whether or not Mrs. Deloatch has the authority to require me not to drink coffee in the office.

“I know you (Deloatch) are concerned about the records; 95 percent of those records are now searched on a computer, wouldn’t you agree,” Vaughan added.

“They are, but even keyboards are very sensitive to liquids,” Deloatch replied.

“I do like a cup of coffee in the morning; I like to drink it on my way to work and after I get to work,” Vaughan noted. “Hopefully this board can give you some guidance on this.”

Deloatch said the consumption of water, tea or coffee doesn’t bother her, but she cringes when someone with a big, open cup walks into the vault.

“The vault is a very precious area to be in; documents in there date back a long time and I don’t want to see those documents damaged or smudged,” said Spruill.

“I understand your concern is safeguarding the documents,” Greene told Deloatch.

Deloatch said she attended a meeting of the District 6 Register of Deeds and of the nine (of 12) present, eight had the same “no eating or drinking” policy within the vault area of their office.

“I would just like to have the respect to follow rules when it comes to the preservation of records within the Register of Deeds Office,” Deloatch said.

Carter noted that Deloatch was elected by the citizens of Northampton County and has the authority to handle the office as she sees fit.

“That authority has been verified by Charles Szypszak for her to adopt rules and practices for safeguarding documents in the vault,” Carter said.

Vaughan said copies of the documents in the Register of Deeds vault are kept in Raleigh.

“Should there be a smudge on any record, they can be replaced,” he said.

No motion was needed by the commissioners. They all agreed that Deloatch, by placing the signs in the vault, was acting within her realm of responsibility by not allowing food or drink within that area of her office.

WINTON – Time to get a move on. And the county would like for it to be a faster move.... read more