JACKSON – Could it be that a man who spent the early years of adulthood seeing the world has found a place to settle down?

If you listen closely to the words of Kenneth “Ken” Creque, it’s a distinct possibility that a Northampton County address is in his long-term future. 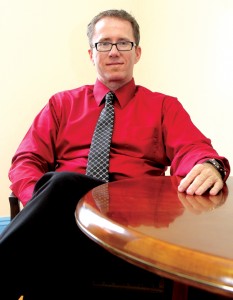 Creque, a Wisconsin native named July 1 as Northampton County Manager, sat down recently with the Roanoke-Chowan News-Herald for an interview. While it was apparent that he changed hometowns numerous times over his first 40-plus years – mainly due to being the son of a US Air Force veteran before spending 14 years himself in the Army – Creque was quick to point out the longevity of his predecessors in the county seat of Jackson, saying that fact made Northampton County such an appealing place to relocate.

“The main reason I chose to accept this job is that Northampton has a history of long-serving managers,” he said. “County and municipal managers are among the few whose jobs are entirely at will. We could be doing perfectly fine in our jobs, and the board will simply say that they need to make a change. There’s no other job where that’s the case. The longevity history of managers in this county makes this job very appealing. That tells me that despite changes on the board here over the years due to elections, they get along with their manager very well.”

Creque said if Northampton County maintains the trend of long-serving managers, there would be, by his math, only three more to follow him from now until the end of the century.

“If I’m here until I retire, and so on with those that follow me, the fourth person that comes in long after I’m gone will start his or her job at the outset of the 22nd century,” Creque noted.

Since taking the position, Creque has been getting to know the lay of the land across Northampton County.

“I’ve met with all the department heads and have met or have scheduled meetings with managers of other entities within the county and the region,” he said.

In nearly two months on the job, Creque said he has discussed the top needs of the county with the Commissioners.

“The Board has expressed to me the need to reduce (property) taxes in the county,” Creque stated. “Currently we’re at 92 cents, higher than our neighboring counties. There are no simple fixes to that tax rate; it took 20 to 30 years to get to that level.

“That leads to a second priority – how can we as local government operate more efficiently,” Creque continued. “How can we reduce operating expenses, money that comes from the General Fund that is almost exclusively funded by property taxes? Then how can we aggressively save money? Not having sufficient funds in the bank limits us on what we need to do on certain projects that are very important to the community.”

Creque was quick to point out that Northampton County does meet all the requirements as dictated by the Local Government Commission.

“But, generally speaking, we’re not where we should be,” he stressed.

As it was before Creque set foot in Northampton, the county’s sales tax revenue has long suffered due to an overall lack of retail business.

“It didn’t take me long to figure out that our sales tax base is split between Hertford and Halifax counties; a lot of Northampton money is spent in those two counties,” he said. “That’s been a point of discussion among department heads and the commissioners.”

Creque noted that Northampton was unique in the fact that it’s roughly two and one-half times wider than most counties in the state.

“There are other counties with more land, but Northampton’s 430 square miles is stretched out. That layout has had a bearing on how this county has developed over time,” Creque remarked. “If you look at other counties, there’s a lot of economic activity centered around the county seat. But here, due to Northampton’s geography, the economic activity is just beyond its edges.”

One “ace” in Creque’s hand early in his career as Northampton’s local government leader is that he has an experienced director in economic development.

“Gary Brown and I have sat down and had numerous talks over the last month about different aspects and the direction the county is going,” Creque said.

Creque was asked if having a military background was an advantage in his leadership role in county government.

“That’s more a preference of what the commissioners desire to see with their county manager,” he answered. “It’s what they feel more comfortable with.”

Creque observed with North Carolina being the home of so many military installations and a high number of military retirees in the state, all with strong leadership backgrounds, it may be instinctive for local government officials to seek out such men and women who once served their country in uniform.

“There’s a heavy military influence in our state; I don’t know if that gives someone with a military background an advantage over another highly qualified, highly skilled individual,” Creque said. “What most elected officials are looking for in a manager is somebody that is able to be a team leader. Some elected officials will give a military veteran more of the benefit of a doubt because so many people have had a positive experience with someone in the military.”

While Creque is still getting his proverbial feet wet in Northampton County, he is house hunting at the same time.

“I’m taking my time, looking for the right place,” he said.

For the time being, Creque is a manager for the week and a traveling dad on the weekends. His wife and three teen daughters – Tiffany, 17, Kimberly, 16, and Brittany, 14 – all reside in Fayetteville.

“They will stay there for right now…I’d be the worst father in the world for moving three teenage daughters as they are all ready to start a new school year with their friends there in Fayetteville,” he said.

The route Creque traveled to end up in Northampton County was unique. He spent the first 14 years of adulthood traveling the world in the U.S. Army. Based on two plaques on the wall of his office in downtown Jackson, Creque excelled at that job as he was named as Soldier of the Year and NCO (Non-Commissioned Officer) of the year.

When he left the Army in 2003, Creque’s career in the civilian world was quick to develop.

“The very next day (after leaving the military), I was hired by the Department of Homeland Security (DHS), working in the Fayetteville office,” he recalled. “I literally walked out of one job into the next one.”

At DHS, Creque was fortunate to become involved in continuing education classes.

“They, like most federal agencies, want their employees to go to college and earn a degree,” he said. “With my Veterans benefits I was able to attend college pretty much for free. DHS gave me time off, with pay, from work to go to college.”

“The whole interest at the time was to get these degrees so I could advance in federal service; I had no intention at that time of going anywhere else,” he stressed. “The job I had was entertaining; it kept me occupied and the pay was good.”

One day, out of the blue, Creque said one of his UNC-Pembroke professors called him in into his office with a proposition. There was an intern position available in Roberson County under the then County Manager Kenneth Windley (who recently served a short stint as Interim Manager of Gates County). The job was a Management Analyst position.

“That job changed my perspective about what I wanted to do in the second half of my life,” Creque said. “Mr. Windley has made an impact on a lot of people; he influenced the direction I took in my career.”

That stage of his career was demanding – working nine-hour days, Monday through Friday, for Windley and then pulling weekend duty at DHS.

“Working at the county level of government taught me a lot, especially seeing first-hand how different programs and policies that are implemented impact the citizens of the county,” Creque noted. “I was hooked on the interaction with the community. At the federal level, I was just a small cog in a big machine.”

As a result of the training he received under Windley’s tutelage, Creque was hired by the Lee County Department of Social Services as an Administrative Officer. In that position, he worked the business end of DSS. He was involved in formulating an annual budget – one a bit more complicated due to the fact that DSS receives federal and state funding along with county money. He also had a hand in program planning and execution.

“That was great training for what I’m doing today,” he said.

Due to a downturn in the economy, Lee County local government officials began to shed jobs, mostly middle management positions, in 2009. Those cuts included Creque’s position.

“I went looking for work and wound up in Plymouth as Town Manager in 2010,” he said.

He held that position until August of last year, at which time he resigned. That decision placed Creque back on the road, looking for work.

“I had a lot of interviews lined-up through November of that year,” he said. “It was a pretty typical time period for a manager to transition from one job to the next, it takes about a year for that to develop. If you notice, town/county managers will be dismissed or resign in the January and July time frames. County/town commissioners work on the same cycle when they search, interview and hire a new manager.”

His job search took him as far away as Georgia. His first interview for the Northampton Manager’s position came in February of this year.

“They (Northampton Commissioners) knew Wayne (Jenkins, the County Manager at that time) was going to retire by the end of June and wanted to have a new manager in place by early July,” Creque noted.

He was called back for two subsequent interviews in Jackson, one in late March and again in early June. He was offered the job on June 26.

Over the course of his military career, Creque served in the 25h Infantry Division in Hawaii; the 101st Airborne Division (Air Assault); as an AirborneSchool instructor; and in the 82nd Airborne Division. While serving, Creque pulled tours of duty in Japan, Korea, Thailand, Panama, Canada and numerous stops within the continental United States.

Now, you can find Creque in Jackson….an address that suits him just fine for today and possibly decades to come.

AHOSKIE – Roanoke Electric Cooperative will be holding their annual Meeting and Member Appreciation Day this Saturday, Aug. 24 at... read more