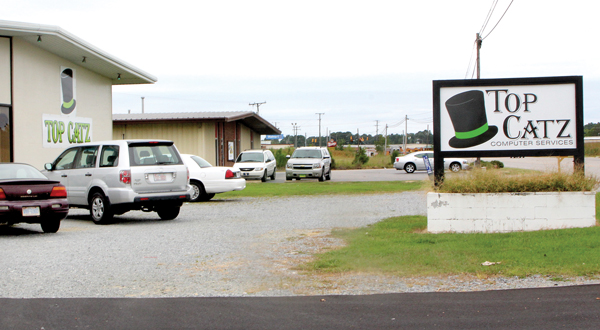 After a vote this week by the Ahoskie Town Council, Top Catz and two other Internet Cafes in town will not be allowed to expand their hours of operation on weekends. File Photo

AHOSKIE – Months after the state made it illegal for these certain kinds of these operations to even be in business, an Ahoskie internet café wanted to expand its operating hours.

But the town council has said no.

Three internet cafes continue to operate in Ahoskie despite court rulings that the games offered are a form of gambling.

North Carolina lawmakers and law enforcement agencies have attempted to shut down Internet sweepstakes cafes for at least six years, with the latest statute taking effect in January. But the gaming industry has appealed charges, filed suit or tweaked software when the laws have been enforced.

Attorneys contend that new software is legal because it eliminated the “entertaining display” for the sweepstakes and allows players to push a “reveal” button to show the existence of a possible prize without necessarily playing the game.

At the July meeting of the Ahoskie Town Council, Tony Meeks, owner of Top Catz Internet Café, requested council consider a request to amend the current ordinance to allow the internet cafes to remain open 24 hours per day on Thursday, Friday, and Saturday.

Café operators say they have had requests from customers who frequent their establishment from Virginia to seek this amendment.

If the change were to be considered it would require a public hearing – sometime in September – because it would be a modification of an ordinance.

Ahoskie Chief of Police Troy Fitzhugh was present at the meeting and was asked if there had been any problems at the Internet cafes.

“We’ve only had maybe two or three calls since they’ve been established,” the Chief answered. “Nothing big other than parking issues at all three establishments,” he added.

“After 12 o’clock at night, that’s usually when the police would get busy,” said Hardy. “I don’t think we should do it (allow an expansion of the weekend hours).”

Hammond reiterated that the cafes’ normal hours of operation are from 8 a.m. to 2 a.m.

“I’m not saying it’s going to happen here, but most of your incidents usually happen from midnight to day,” Hardy declared. “If it starts carrying on at night then the police are going to be busy.”

Fitzhugh noted that his department did not have a problem with 24-hour Internet cafes at this time.

“I would have to assess it at the door and let you know,” the Chief said. “Right now the only issues we’ve had are parking.”

Fitzhugh even cited a survey sent out by former North Carolina Governor Beverly Perdue’s office requesting information on incidents in various towns with Internet cafes and that Ahoskie only had to report two.

“One was an alarm call at 1 (a.m.) and another was about a person just hanging around, and we checked on it and they left,” Fitzhugh said.

As there was no more discussion, Mayor Brien Lassiter called for a motion, at which time Hardy made a motion to not hold a public hearing prior to possibly amending the ordinance. Four Council members supported the motion, thus denying the request to expand weekend hours at Ahoskie’s trio of Internet Cafes. Councilman Maurice Vann cast the only dissenting vote.

GATESVILLE – Beauty is in the eye of the beholder. Apparently, so is the height of the grass in your... read more