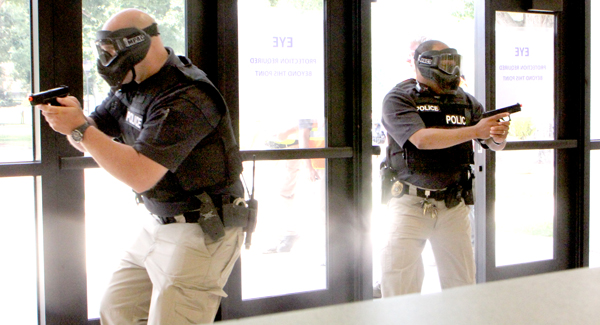 The first wave of police officers enter Marks Hall in search of a shooter during the Aug. 9 drill on the campus of Chowan University. Staff Photo by Cal Bryant

MURFREESBORO – It was a scene eerily reminiscent of Columbine, Colorado, Blacksburg, Virginia and Newtown, Connecticut.

Shell casings littered the floor of the multi-story Marks Hall on the campus of Chowan University. Screams for help were heard up and down the hallways of this classroom building; some students were able to point in the direction of the location of their shooter; others lay motionless on the floor.

Meanwhile, the university’s siren was wailing, signaling trouble on the historic campus. That sound was soon accompanied by the sirens of responding police, fire and EMS units.

Following an intense search of Marks Hall, the “shooter” was taken into custody, but not without more “blood” being spilled during an exchange of gunfire with law enforcement officers.

Under armed guard, EMTs busily attended to the wounded. A triage area was set up in Squirrel Park where the shooting victims were treated in order of medical importance prior to being transported to Vidant Roanoke-Chowan Hospital in Ahoskie. Some never made it….their bodies covered with a white sheet.

“We certainly saw some areas that we are vulnerable in and areas that certain protocols have the opportunity to be fine tuned, however, all and all, it went well,” said Smith of the Friday, Aug. 9 drill. “An exercise is designed to test current plans and protocols. If that plan could not be carried out as expected, then that is when we have the opportunity to make those adjustments before an actual event. That is what we did Friday. We tested Chowan University’s Crisis Plan, local and state emergency responder’s protocols, Vidant Roanoke-Chowan Hospital’s mass casualty plan, and multi-agency coordination.”

Smith said the drill was complimented by a tabletop exercise held July 15 at Chowan.

“This allowed all the agencies to discuss agency protocols and plans. It also provided an opportunity to discuss each agencies capability,” he noted.

Murfreesboro Police Chief Darrell Rowe, who has attended two drills such as the one held last week in his town, knows how much more is involved in the aftermath of securing just one building.

“Had this been an actual shooting on a college campus, we would right now be deploying officers to every other building here at Chowan, first in an effort to make sure no one there has been shot; secondly to search it, secure it and protect the students/staff from possibly multiple suspects involved in the shooting,” Rowe said.

From his perspective of the drill, Rowe said it was obvious that all entities taking part need to engage in additional practice.

“Every time you do something of this magnitude, you take note of things you can do more proficiently,” Rowe stressed. “We also need to do these types of drills at other venues to include our public schools. Unfortunately, real life shootings can happen anywhere at any time. The better you plan, the better you respond. Hoping it will not happen here is not a plan, you’ve got to be prepared and that’s what we did here today.”

“You never know when or where something of this nature will occur, so the key is preparation,” he stressed. “We treated this as the real deal; those involved took it seriously. We were able to learn a lot from the drill, both on the county’s end and the university’s end.”

“It took a lot of planning on behalf of all the agencies to pull this off,” Smith stated. “Not only did we need a lot of staff to respond to this mock disaster, but we had to insure regular duties went on as well. All these agencies did a wonderful job with that.

“Another challenge was not to tie up our regular radio operating frequencies,” Smith added. “This was accomplished by using a combination of available resources (State Viper Communications and Local Digital Channels).”

Smith praised the evaluators who were involved in each stage of the drill.

“Vidant Roanoke-Chowan Hospital appreciated the collaborative effort that was demonstrated in the disaster drill,” said Susan Brinkley, Director of Risk Management, Quality, and Accreditation at RCH. “Our hospital has a comprehensive disaster policy and procedures with emergency staff trained and prepared to respond to disasters of this type in the Roanoke-Chowan area.  We appreciate all efforts made for us to be more proficient in our disaster planning.”

“These are two partnering outside non-governmental agencies that assisted in this event,” he said. “Hertford County Emergency Management and Rivers have a MOU that would allow Rivers to make and provide meals during a disaster with short notice for first responders. That MOU was tested and went off without a hitch in this event. MedEx is a private ambulance service that provided additional EMS units to help overcome EMS multiple patient adversities.

“Last, but not least, I would like to thank ChowanUniversity and staff. They put themselves out there to be tested and become a punching bag and didn’t have to. I feel the University will be stronger for it and have comfort in knowing what worked and what needs to built upon in there disaster planning,” Smith said.

“Even though the emergency response drill centered around a fictitious scenario, it still gave Chowan’s Public Safety, and the seven other local agencies involved, a very real idea of issues that have occurred on other campuses throughout the nation,” said Josh Barker, Director of University Relations at Chowan. “This university takes safety very seriously, so preparation is key.

“From this scenario, Chowan will be able to review an after action report from evaluators who monitored the event in order to make any necessary improvements to our plan of action for the future,” Barker added.

AHOSKIE – Bicycles, yes; but skates and skateboards, no. It’s part of more than 25 rules and regulations governing the... read more