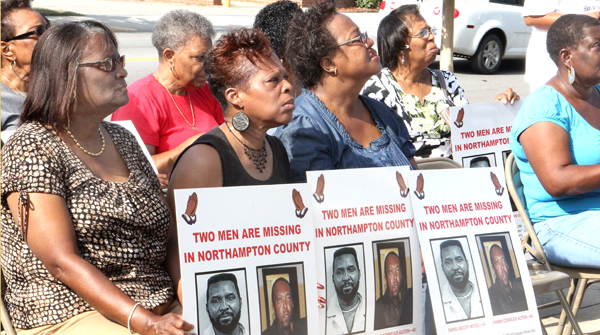 JACKSON – Since the mysterious disappearance of two Northampton County men, family and friends of Daniel McCoy Moses and Shawn Cornelius Alston have solicited the help of local, state and federal officials.

On Saturday they sought assistance from a higher power.

Gathering at the base of the towering front steps of the historic Northampton County Courthouse, a small, but enthusiastic crowd participated in a prayer vigil for the two men – Moses, a 61-year-old who vanished on June 16, 2011, ironically the same day a fire destroyed his home in the Rehoboth community, and Alston, a 40-year-old last seen on Oct. 18, 2012 as he was leaving a neighbor’s house on Berry Scott Trail in Garysburg, walking in the direction of his home.

“We are not here to protest; today we are here to pray,” said Shelia Moses, the sister of Daniel. “We’re here to ask for prayer for the Northampton County Sheriff’s Office, the SBI and the FBI. They know, we know, that God is not the highest authority, he’s the only authority.”

For Sheila Moses and Lola Robinson, the mother of Alston, neither had met face-to-face until Saturday.

“We have been brought together by some unusual and difficult circumstances,” Moses noted. “But we are sisters, because God is our father. We are in this together; we are in this for the duration…we will see this thing through.”

“Our family keeps asking the same question, what happened to Shawn,” said Robinson. “He finally had something going his way, ready to start a new job with Perdue. But he never got there; he went missing after leaving the home of a friend. Our family is praying for closure.”

Robinson said a search along the same path her son took that fateful night was recently conducted by roughly 50-to-60 individuals.

“We did all that by ourselves, family and friends searching and I really appreciate them coming out,” Robinson said. “What we need now are your prayers.”

“I come home (from Atlanta, GA) about once a month; Lola Robinson gets up every day and goes out and looks for her son and I admire her for that,” said Moses.

She added that her brother moved back to Northampton County after living for a while in New Jersey and later in Rocky Mount.

Reginald Robinson offered a prayer for the law enforcement authorities involved in the case.

“We ask you Lord to give a blessing to the law enforcement, above all they have done to help us in our time of need. Please give us a new outlook on these two cases. Help law enforcement look above and beyond to help us,” he said.

Robert Creecy also knows the mental and physical anguish of waiting for a missing loved one to surface. His uncle, Robert L. Moore, disappeared 15 years ago.

“Since that time we haven’t heard one word about Uncle Bob,” Creecy said. “He was an elderly man; he taught school for 30 years and didn’t have any enemies. But without rhyme or reason, one morning he disappeared into thin air.

“I can tell you, it’s rough out here,” Creecy continued. “A lot of bad things are going on. There’s too much shooting, too much killing; too much stealing; and there’s too many missing people. Somebody has got to do something. Good people need to unite with the families of these victims, with the church and with the criminal justice system and make every effort to change this situation.”

How can an average citizen help these two families find closure, as well as the Creecy family and the family of Phyllis Powell of Woodland who vanished 50 years ago? Moses said it was as simple as sending a message to Congressman G.K. Butterfield asking for more intervention by federal criminal investigators. In the meantime, Moses said she was working to broaden these two cases by using the national media.

In closing, Leon Moses said do not underestimate the power of prayer.

“I pray for you, you pray for me and watch God change things,” he said.

GATESVILLE – When Jay Greenwood first arrived in Gates County in 2003, his first major task was to pick up... read more