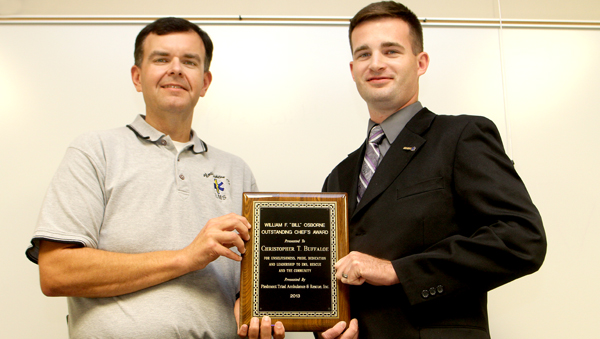 CONWAY – Paul Nowell vividly recalls the first time he laid eyes on Christopher “Chris” Buffaloe. He said it was in the late 1990’s while answering an emergency medical call in the Conway area.

“The first time I met Chris he was 12-years-old and I was working as a Shift Medic. He was on a 4-wheeler – complete with a red light, turnout gear, and a first aid kit – answering calls. He rose through the ranks after that,” Nowell remarked.

Now, 14 years later, Nowell stood at the podium inside the training room of the spacious new Conway-Severn Rescue Squad building, there to present Buffaloe with one of the most esteem honors bestowed annually by the North Carolina Association of Rescue and Emergency Medical Services.

Buffaloe is the 2013 recipient of the William F. “Bill” Osborne Outstanding Chief Award, named in honor of the late chief of Piedmont-Triad Ambulance and Rescue who sponsors the award.

“Bill Osborne was one of the pioneers in the state in establishing rescue and emergency medical services out in the Piedmont area. He is really known well out in the Greensboro, High Point area,” said Nowell who serves as Northampton County’s EMS Supervisor as well as the District 6 representative on the North Carolina Association of Rescue and Emergency Medical Services Board of Directors.

Nowell said Osborne was responsible for the transformation of the old High Point Rescue Squad, which was on the verge of shutting down, into what is now the second largest squad in the state.

“Bill Osborne could take nothing and make something out of it,” Nowell said.

Nowell said there were approximately 30 names submitted from across the state to a committee charged with the task of selecting a winner of the Osborne Award.

“It’s a highly competitive award; they look at who has made the biggest difference, had the biggest impact on their squad,” Nowell explained. “Chris stood out; he did the same thing Bill Osborne did years ago. When Chris took command of the squad here, there was no building. They existed out of two filing cabinet drawers at the Town Hall and one (vehicle) bay at the Conway Volunteer Fire Department.”

Then, Conway-Severn Rescue’s membership was so low that they could only answer roughly 10 percent of their calls, Nowell said.

“Now they answer 100 percent of their calls with a mixture of paid staff and volunteers,” Nowell noted. “They have this beautiful new building; upgraded from light to medium rescue; and have added a search and rescue team that serves across the county. They went from nearly being shut down to being one of the biggest emergency medical responders in the county.”

Conway-Severn Rescue also handles non-emergency medical transport calls, dedicating two units to that daily task, while another unit handles emergency calls. A team of volunteers are responsible for the search and rescue calls. Paid personnel man the building during the day, with volunteers taking turns at night, thus giving the squad 24/7 capability.

Buffaloe became Captain of Conway-Severn Rescue on Jan. 1, 2010. He has been affiliated with the squad since the age of 12.

Nowell said at one time, Conway-Severn Rescue was on a business version of life support.

“They were nearly defunct; got into some trouble with the IRS because they were not filing the necessary paperwork on a timely basis,” Nowell recalled. “They eventually lost their (Medicare Provider ID) number. They had to start over from scratch.

“Chris came in and has done a great job since,” Nowell added. “He has done a business plan, handled the budget and audits. This squad, under his direction, has gone from worst to first. The county is tickled to death to see that. With their three trucks in the loop, Northampton CountyEMS as a whole has seven trucks covering the county daily. We staff as many trucks as some of the larger counties do and we do that because we have a great mix of paid staff and volunteers. We utilize our resources wisely.”

With those facts in mind, Nowell said Buffaloe was extremely deserving of this esteem honor from the state organization.

“A stronger Conway-Severn Rescue Squad means a stronger Northampton County,” he stressed. “We still rely heavily on volunteers. I believe Northampton County got it right. We looked at our neighboring counties and saw them put their (EMS) volunteers out of business. Now they’re paying for it. We worked with our volunteers, getting them to the point where they need to be. We have an active (rescue) Juniors (ages 14-17) program, nurturing them along to become the next group of volunteers or paid staff members. Chris started in the Junior Cadet program. Departments operating without one have doomed themselves for the future.”

Nowell said Buffaloe is a prime example of when compassion and dedication cross each other.

“This new building housing Conway-Severn Rescue is a result of his dedication; he sought out and received a $200,000 grant from the American Recovery and Reinvestment Act, plus a $25,000 grant from the Office of the State Fire Marshal to go along with a low interest USDA-Rural Development loan. He did all of that basically by himself. He’s always stepped up to the plate when asked,” Nowell said.

Those efforts did not go unrecognized by the North Carolina Association of Rescue and Emergency Medical Services and the Piedmont-Triad Ambulance and Rescue, who stated:

“This award needs to go to someone who is a hard worker, never a person to quit, and a person who is dedicated more than 100 percent to the profession….someone who loves, lives it, and breathes it. It’s hard to go through all applications and pick a winner because there are so many deserving chiefs. But the winner stood out because the biography submitted reminded us so much of Bill. This person took over a squad that was getting ready to fold because of a lack of leadership and dwindling membership. This person went to work, took the bull by the horns and turned the squad around by applying for some grant funding and took care of some IRS problems. This person was determined to get the squad back on its feet and keep the necessary resources to provide the citizens of his community with proper rescue and EMS. This Chief has the same pride and determination that Bill Osborne had in his squad. It’s our honor to present this award to Christopher Buffaloe.”

“I didn’t know Bill Osborne, but I’ve read a lot about him,” Buffaloe said in accepting the well-deserved plaque. “I think about what he did at his squad and then look at what we’ve done here at Conway-Severn Rescue. We’ve gone from answering roughly 220 calls back in 2009 to topping 1,600 last year.

“There have been a lot of challenges; we have a good staff here that keeps me squared away and on my toes,” Buffaloe added. “It’s all a team effort. I’m not sure how long I’ll continue to do this, but I’ll stay here as long as I’m able. I’m pleased and honored to receive this award.”

He thanked his wife, Kelly, saying that, “she’s the one that suffers the most because of all the long nights I spend here.”

Whether it be operating an ATV or a typical ambulance, both with flashing red lights, Buffaloe will resort to whatever means necessary to answer the call of a person in need.