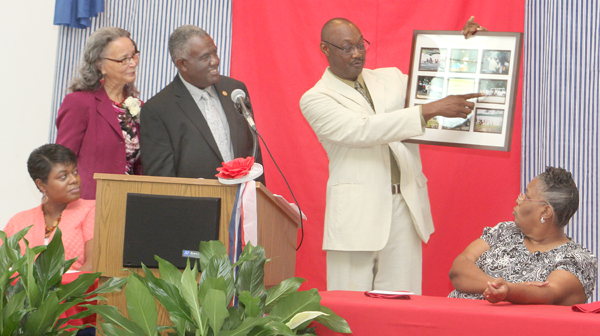 Sheriff Wardie Vincent (center) takes a walk down memory lane as he was presented with a collection of old Exodus for Youth photos by retired District Court Judge Al Kwasikpui (right). The Sheriff’s wife, Betty, is shown standing at left. Staff Photo by Cal Bryant

In the world of emergency responders, those two codes respectively translate to: End of Service; Ending Tour of Duty.

It was fitting that the official close of Wardie Vincent’s 40-year career as a law enforcement officer simply ended with those two 10-codes.

In front of family, co-workers, friends and peers last week, Vincent was praised for his lifelong commitment to the citizens of Northampton County. He retired effective July 31 as the county Sheriff.

The two-hour tribute held at the Northampton County Cultural and Wellness Center near Jackson was packed with praise for the former Sheriff. He was fondly referred to as a great teacher, good listener, boss, and friend.

“He showed patience and understanding,” said Evon Whitaker of the Northampton Sheriff’s Office who served as emcee of the event. “He was a wonderful Sheriff and a wonderful teacher; I learned a lot from him.”

Vincent was hailed for his 40 years of service, taking a pledge to “serve and protect.”

“We give thanks for his many years of dedicated service in law enforcement,” stated Virginia Spruill, Vice Chair of the county’s Board of Commissioners. “We are witnessing the end of an exceptional career. Retirement means closing one door and opening another…..time and place takes on a different meaning when you retire. We wish Sheriff Vincent well in his new life.”

Vincent’s impact on the law enforcement community was very much noticeable during the ceremony. Not only did the audience include members of his staff at the Sheriff’s Office and Detention Center, but others who work in the same field, including police officers representing several municipalities, members of the U.S. Marshall’s Service, the North Carolina Sheriff’s Association, and several active and retired Sheriffs from North Carolina and Virginia.

In his opening remarks, Robert Carter, Chairman of the Northampton Commissioners, noted that he and Vincent were elected to their respective posts at the same time 14 years ago.

“We have served this county together,” Carter said. “Thank you for what you have done to uphold the law. The attendance here today attests to your worthy service.”

Carter also had a word for Vincent’s wife, saying, “Mrs. Vincent, please give the Sheriff your ‘honey-do’ list. Please keep him busy in retirement.”

As a county employee who has served longer than Vincent, Major Milton Drew, Administrator of the Detention Center, said he had plenty of stories he could share.

“If I mess up anything, you can’t fire me now,” Drew laughed.

Drew noted Vincent’s humble beginnings in law enforcement, that of working as a security guard with the Migrant and Seasonal Farmworkers’ Association in Rich Square. In 1978, Vincent completed his Associate Degree in Criminal Justice at Halifax Community College. He was hired that same year as a Special Deputy by the Northampton Sheriff’s Office, working his way up through the ranks by serving as a Civil Officer, Deputy, Detective, Chief Deputy and then Sheriff.

Drew also noted that Vincent’s work extended beyond Northampton’s borders as he served as an undercover narcotics agent in Bertie, Halifax, Hertford and Warren counties.

“Sheriff Vincent can tell you of the long hours it sometimes takes to work and solve a case,” Drew stated.

Vincent’s career also included a stint as a Probation and Parole Officer and as Chief of the Garysburg Police Department, where he doubled as the town’s Building/Zoning Inspector.

“Wardie has done it all,” Drew boasted. “He has served at the federal, state and local level. He has worked in every facet of law enforcement.”

Drew recalled one particular story when Vincent first announced his intentions to seek the Sheriff’s seat 14 years ago.

“He came in my office and asked for my support in his run for Sheriff,” Drew said. “I told him that I worked for (then) Sheriff John Wood and I would have to support him. But I told Wardie that if he won the election, I’d give him 100 percent. After he won the election, he came back to my office and again asked for my support. I told him I’d give him 105 percent and I have supported him and backed him ever since then. You will not find a better person in this room that Sheriff Wardie Vincent.”

Drew said Vincent worked hard to obtain grant funding in a never-ending effort to improve the Sheriff’s Office. Apparently, Vincent was successful in those ventures, totaling $900,000 in various grants over his 14 years as Sheriff.

“Sheriff, I know you will keep Northampton County in your heart; congratulations on your retirement, you’ve earned it,” Drew concluded.

At the Aug. 2 event, Vincent was the recipient of three special awards.

“You are not only recognized here in NorthamptonCounty, but in the halls of Congress as well,” Burwell said.

NC House Representative Michael Wray of Gaston presented Vincent with The Order of the Long Leaf Pine, one of the most prestigious awards in the state of North Carolina as presented by Gov. Pat McCrory.

“You have pulled your time; now comes the time in life to spend like you want to,” said Wray. “Your retirement is well-deserved and so is the Order of the Long Leaf Pine.”

Kimberly Turner, Assistant Northampton County Manager, presented Vincent with a plaque of appreciation for his 40 years of service.

Numerous individuals came to the podium to pay respect to their friend and colleague. Included in that group was retired District Court Judge Al Kwasikpui. He presented Vincent with a framed collection of old photos during the days the Sheriff was associated with Exodus for Youth.

The Northampton County Fraternal Order of Police (Lodge #47) presented Vincent with a plaque, noting that he was a charter member of that organization.

Others who came forward shared a common thread as many members of his law enforcement team, and others in that line of work, said they chose and have succeeded as lawmen because of Vincent’s guiding hand.

Following lunch, Vincent was presented a resolution by Commissioner Carter in honor of the Sheriff’s service to the county. Carter also presented Vincent with his badge and service revolver.

Vincent wasn’t about to slip out quietly, without having a chance to share a few comments on his long years of public service.

“First you give honor to God, who has blessed us to do everything,” he said. “I want to say thank you to my wife, Betty, who has supported me over the years. She has stood by me; she consoled me on all those nights when I got home and I couldn’t sleep. To my daughters, my son and my grandkids, thanks for being there for me.

“I want to thank my staff; they worked diligently to make sure that Northampton County citizens had the best law enforcement we could offer them,” Vincent stated. “The staff stuck by me through thick and thin.”

He continued, “Thank you to our Board of Commissioners who have supported me over the years. Our success as a department is because of our board. To madam DA (District Attorney Valerie Asbell), thank you for working with me and my staff. I enjoyed the relationship we had.

“To everyone, I say thanks. We’ve worked hard and had some good times and some bad. It’s been an awesome experience, but in all of my doing, if I have not touched somebody’s life, then my life has been in vain. I hope I’ve touched your life in some way. God bless you all,” he concluded.

And with that, Vincent’s long journey, his tour of duty, came to an end.

The treasure is in the trash