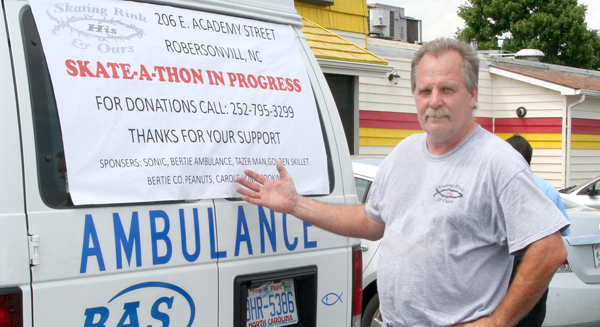 Norman Stocks points to a list of area businesses that sponsored his two-day charity roller skate from Greenville to Ahoskie including Bertie Ambulance Service. Stocks is seeking to raise $20,000. Staff Photo by Gene Motley

AHOSKIE – It may be hard to imagine anyone skating on asphalt for an hour or so in humid, 90-degree heat.

Now imagine doing it from Greenville to Ahoskie.

That’s exactly what Norman Stocks did over a two-day period to raise money for the non-profit Christian roller skating rink he operates in Robersonville.

“The first five miles or so was for cancer awareness and then after that I took on a cause to skate right on to Ahoskie to support this skating rink in Robersonville,” said a winded Stocks as he rested himself seated on the rear bumper of a Bertie Ambulance Service vehicle.

“It’s a Christian skating rink,” he added. “We do a lot for the kids and all and we just need a little funding and the goal we raised was $20,000 and I don’t know what we’ve reached yet but I’ve made my journey.”

“It’s been an awesome ride,” he said with a big, wide grin as the beads of sweat rolled off his face.

Stocks’ route was from US 264 in Greenville, then north to Bethel on US 13. From there he took the dual highways through his home base of Robersonville for the first day of the journey. The second day on US 13-64 was to Williamston, then Windsor, and finally ending up in Ahoskie at the door of one of his sponsors, Golden Skillet restaurant.

Stocks gave his age as being in his fifties, so naturally there were some concerns for him on such a trip in mid-summer weather.

“Bertie Ambulance sponsored us and also escorted me all the way for the two days,” he said.

“Awesome, awesome group with some super employees,” he noted, pointing to the emergency support personnel who stood nearby now and had shadowed his 70-mile odyssey over the past two days.

“We followed him from Williamston all the way to Ahoskie,” said BAS driver Alan Smith.

“The best part was watching him skate,” chimed in fellow driver, Tina Harris-Hardy. “He’s 54 and doing it; I’m 47 and I couldn’t.”

“They were right there when I needed them for whatever, just great,” Stocks added.

Stocks also cited his deep Christian faith as a guiding part of the journey, and what he feels it’s led him to accomplish.

“When the Lord touches your heart and gives you a vision, (you) go with it,” he commented. “If you can’t prove to someone what God can do, then how can anyone else.”

“Whatever determination it takes, I’m going to make it,” he remarked, lifting his head into the afternoon sun.

Stocks’ journey was also dedicated to a fellow Martin County friend who is a cancer survivor.

“My best friend that skated years ago, David Nelson, is dealing with cancer now,” he explained. “He wanted to come with me but he won’t able to skate so I dedicated the time to him because it’s good just knowing we’ve got that connection.”

Part of the improvements Stocks wants to add to his roller rink includes mechanized chariot rides for kids, particularly the disabled. He has one now, but would like to have a total of ten.

“I’ve got one made,” he said. “The children ride on the skate floor with it because they’re not able to skate or walk, so I made a chariot for them to ride so that these kids could have fun.”

Stocks says he’s unaware of exactly how much he’s raised, but if you would like to contribute you can reach him at His & Our Skating Rink in Robersonville, or call 252-795-3299.