WOODLAND – An alternation between two neighbors near here Sunday led to the arrest of one and a trip to a hospital operating room for the other. 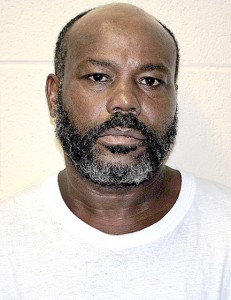 Jarvis Jerome Eley, 51, of Woodland is currently being held in the Northampton County Detention Center under a $250,000 secured bond for first degree attempted murder. Eley made his first court appearance on July 29 and is scheduled to be back in court on Aug. 5 for a probable cause hearing.

The crime occurred at approximately 6:30 p.m. on July 28 at Arrowhead Mobile Home Park near Woodland. According to Northampton County Sheriff’s Captain Brenda Burnette, deputies were dispatched to the scene where there was a report of a stabbing.

“We learned from witnesses at the scene there was an initial altercation between the two men, which led to a stabbing,” said Burnette who served as the lead investigator on the case.

Burnette said NCSO Deputy Lloyd Melton was the first to arrive at the scene.

“He was informed of the identity of the suspect and the location he was last seen,” Burnette said. “Deputy Melton was able to locate Mr. Eley and detained him for safety purposes until we could sort out all the facts.”

She added that information was given as to the possible location of the weapon (a knife).

“We searched along the woods line where Mr. Eley was seen at, but we were unable to locate the weapon,” Burnette noted.

Meanwhile, the victim was transported to Vidant Roanoke-Chowan Hospital in Ahoskie and later taken to Vidant Medical Center in Greenville.

“He underwent emergency surgery in Greenville, but he’s now back at home and appears to be doing well; I spoke with him on Thursday of this week,” Burnette stated.

In addition to Burnette and Melton, other NCSO officers responding to the scene were Lt. Jason Boone and Deputies Jeff Barnes and William James.