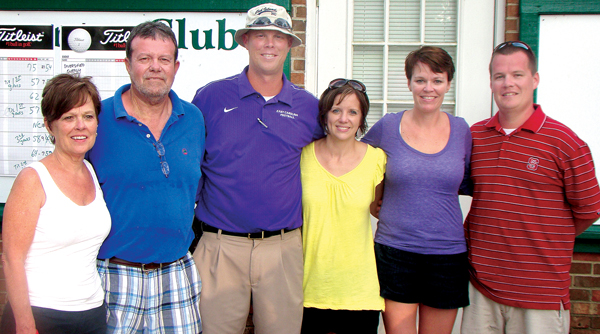 Those at the forefront of aiding Henry Hodges in his ongoing battle against cancer are, from left, his grandparents, Jeanette and Ricky Hodges; his uncle and aunt, Brandon and Anna Hodges; his aunt, Nikki Carlyle; and his father, Chris Hodges. Contributed Photo

AHOSKIE – One month shy of his third birthday, Henry Hodges has already experienced a lifetime of doctor’s appointments.

Diagnosed with a malignant brain tumor in June of last year, Henry and his family – parents Chris Hodges and Melissa Parker of Murfreesboro – dug deep inside their souls and launched a battle that has included numerous rounds of chemotherapy, radiation, and multiple surgeries prescribed by his treatment protocol. 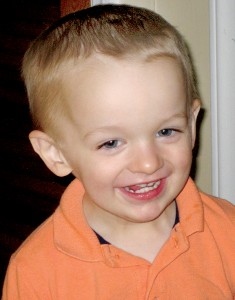 Two-year-old Henry Hodges has battled cancer for over one year. Contributed Photo

Putting the health of their son into the capable hands of doctors and medical specialists at Children’s Hospital of the King’s Daughters in Norfolk, VA, Chris and Melissa discovered that their son is a battler. The youngster, now in the midst of therapy sessions to assist in the recovery process, remains upbeat….he’s happy and energetic.

“His attitude is great; if you were unaware of what he’s been through in such a short amount of time, you would never know if anything was wrong in his life,” said Henry’s uncle, Brandon Hodges.

The rounds of medical treatments appear to be working.

“Henry is doing fantastic,” the uncle stated. “They perform an MRI on him every three months to check on size of the tumor. It’s not growing right now and we see that as a positive sign.”

However, the battle is far from over. Hodges said doctors told the family that the treatment for this particular type of cancer is at least a two-year process.

To that end, Brandon Hodges stands again at the forefront of a fundraising golf tournament that last year attracted over 50 teams.

The second annual “Henry’s Heroes” Golf Tournament is scheduled for Tuesday, Aug. 13 at Beechwood Country Club near Ahoskie. Due to the number of teams expected (21 had already registered as of July 26), there will be two tee times (9 a.m. and 1:30 p.m.). A barbecue lunch will be served in between at 12 noon.

The four-person Superball tournament has an entry fee of $250 which will include mulligans. Registration is accepted two ways – mail a check (payable to Henry P. Hodges) to Brandon Hodges, 320 Vineyard Drive; J3, Winterville, NC 28590, or online at www.birdeasepro.com/henrysheroes.

For those wishing to donate to the cause, but are not golfers, they may consider becoming a sponsor. They can choose to donate $100 to have their name (or business name) on the event’s official website; $200 for website identification and signage on one of the golf holes; or $500 for a website listing and being the event sponsor.

There is also a silent auction being held on the website. Items are being added weekly. Online bidding will continue until 11:30 a.m. on Aug. 13.

“Henry is such an awesome child,” Uncle Brandon said. “He continues to amaze everyone with his determination. Please consider become one of Henry’s Heroes this year and help the family continue to meet his medical needs.”

Henry was diagnosed with a brain tumor on June 12, 2012  at Vidant Medical Center in Greenville. After being transferred to NC Children’s Hospital in Chapel Hill, Henry underwent brain surgery to attempt to remove the tumor.  Due to complications with surgery the surgeons were only able to resect a small portion of the tumor.

On June 26, the tumor was identified as an Atypical Teratoid Rhabdoid Tumor (ATRT).  Henry was transferred to Children’s Hospital of the King’s Daughters to complete treatment.  Due to the aggressive nature of this type of tumor treatment was started immediately.

Since the tournament last year, Henry completed his treatment protocol for ATRT which included five rounds of chemo, three of which were high dose chemo followed by stem cell transplants and 28 days of proton radiation therapy.  Henry did well during treatment and the tumor showed no signs of new growth.  He has had two MRIs since completion with results indicating a continued decrease in the size of the tumor.  Henry will continue to receive an MRI every three months for the next two years to continue to monitor the tumor closely for possible growth and to make sure that the cancer does not spread to other areas of his body.  The plan is to then monitor his tumor for increasing lengths of time.

Henry has slowly been able to return to being a typical two year old with the removal of his CVL and NG tube.  He has remained happy and outgoing through all of this while learning to adapt to the extraordinary changes in his life over the past year.

At this point Henry is still in recovery from the high dose chemotherapy that he received during his treatment.  He receives speech therapy to address speech and feeding concerns, all results of the intense chemotherapy that he was given.  Henry’s complete story and timeline of events over the past year can be followed by visiting www.carepages.com  and typing in SupportingParkerHodges in the search bar.

Annual future tournaments will continue to be held in Henry’s name with proceeds going to a charity close to the Parker-Hodges family starting with next year’s event.