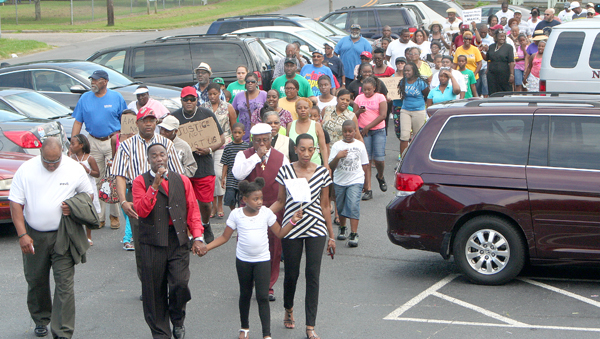 A crowd of more than 150 participated in a “Memorial March” at New Ahoskie Baptist Church Sunday in solidarity and remembrance of slain Florida teen Trayvon Martin. Staff Photo by Gene Motley

AHOSKIE – It was one of many marches, but just as poignant.

As hundreds of people across the country attended “Justice For Trayvon” rallies calling for civil rights charges against George Zimmerman in the wake of his acquittal a week ago in the fatal shooting of black teen Trayvon Martin, a reverent, peaceable, march and rally was held here Sunday in the parking lot at New Ahoskie Baptist Church.

Organized by the church pastor, the Reverend C. David Stackhouse, the rally attracted young and old, black and a few whites, and kept its focus on the family.

Rev. Stackhouse was joined in support by other clergy: Bishop J.C. Watford of Rountree Temple of Praise Church of God in Christ in Powellsville, Rev. James Shearn of Jordan Grove Missionary Baptist Church in Winton, and Rev. Pete Williams of Charity Baptist Church of Ahoskie.

Originally the march was to be from the church west on Hayes Street then south to Main, east to Martin Luther King, Jr. Drive, and back north to New Ahoskie. However, state Department of Transportation rules prevent marches on state-maintained roads and streets without a 10-day permit, and the one for the Memorial March was only seven days old.

It did not deter the spirit of those gathered together.

“We will march instead on holy ground,” said Rev. Stackhouse, to the amen’s and applause of the gathering.

“We come today for a two-fold purpose,” he added. “We come to memorialize a 17-year-old child. We’re going to light a candle and pray a prayer of remembrance. And the second reason we are here is to pray for the Martin family.”

“We have shared all the anger with the whole country, but has anyone stopped and called for prayer,” he asked. “Part of our history is uniting in prayer, so we’re going to memorialize and energize thru prayer.”

As pastors Shearn and Williams offered up prayer, Bishop Watford reminded those gathered that while the 90-degree heat may have kept some away, there was a higher reason to be there.

“It doesn’t matter what color we might be or what status we hold in life, we all deserve a right to live and feel safe in our communities,” he said. “And we must continue to march until injustices for some become justice for everybody.”

He added, “We can march but we must seek those politicians and lawmakers who make things happen for the good of everybody.”

As a peace candle was lit at the base of the church steps the marchers wove their way thru the church parking lot, at first singing, then marching silently.  Some carried signs and homemade placards that read, “Justice for Trayvon”.

“Turn all of that anger, all of that frustration, all of that ambivalence into something positive,” said Rev. Stackhouse. “Become stronger by remembering the words: Do unto others as you would have them do unto you.”

The march lasted about fifteen minutes.

RALEIGH – An entity that has poured millions of taxpayer dollars into projects in rural areas of North Carolina is... read more