WINDSOR – An undercover operation conducted by several agencies has netted the arrest of a state correctional officer on drug charges.

Windsor Police Chief Todd Lane reported that Richard Henry Evans, 22, of Hamilton was arrested Wednesday and charged with three felonies – possession with intent to sell and distribute a Schedule II narcotic (cocaine), maintaining a vehicle for the purpose of the sell and distribution of a Schedule II narcotic, and possession of a controlled substance on the premises of a correctional institution. 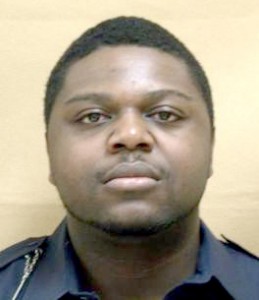 Evans, employed since December of last year by the North Carolina Department of Corrections as an officer with the state prison in Windsor, was placed in the Bertie-Martin Regional Jail under a $75,000 secured bond. He made his first appearance in Bertie County District Court on Thursday.

According to information provided by Keith Acree of the NC Department of Public Safety, Evans resigned his position on Wednesday.

“This investigation came to a successful conclusion due to several agencies working together,” said Lane. “It was a great example of how different agencies came come together for the common good.”

“I especially want to thank (Windsor PD) Lt. Detective Ricky Morris for the role he played in this investigation,” Lane added. “He did a great job in working this case, professionally and diligently, and his hard work led to this arrest.”

Morris credited the cooperation of Bob Jones, Superintendent of Bertie Correctional Institute, in bringing the investigation to a successful conclusion.

“Mr. Jones took this matter very seriously; he understands the danger involved if illegal drugs wind up in the hands of inmates,” Morris said. “That danger is not only present for the staff at the prison, but for the other inmates as well.

“I can say for a fact that since Mr. Jones came back to Bertie as the Superintendent seven to eight months ago we (Windsor PD) have noted a dramatic drop in the number of calls for our assistance at the prison,” Morris added. “The security there now is what one expects from a prison of that size.”

Morris said the undercover operation worked perfectly….leading Evans to believe he was in communication with an inmate who wanted to purchase illegal drugs.

“He (Evans) believed it to be true and was bringing the drugs in on Wednesday at which time he believed he would be paid a fee,” Morris said. “When he drove onto the prison property we made the arrest. The drugs in his possession never made it inside the prison.”

Morris said Evans was previously employed as an officer with the Robersonville Police Department.

“His job now, well at least up until Wednesday, was to watch over the inmates at the prison and guard their safety,” Morris stated. “He didn’t do that in my opinion. If the drugs made it inside the prison then it places the inmates and his fellow officers in jeopardy.”

Morris added that the undercover investigation involved other correctional officers at the Bertie facility. No other arrests were made.

“Whatever we can do to assist the state prison here in our town we’re happy to help,” Morris concluded.

WINDSOR – A somber mood was cast here Saturday over what is typically a joyous event. Seventeen-year-old Deonta Whitaker of... read more