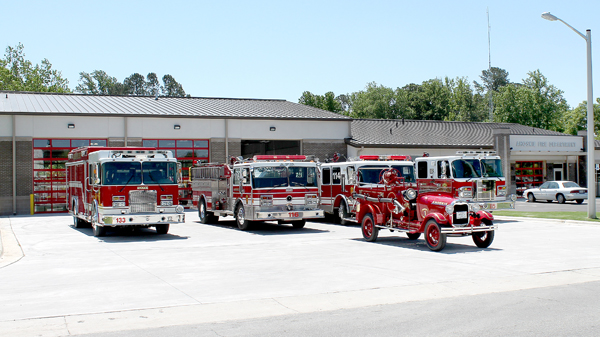 AHOSKIE – For well over a half century, the building on the southwestern corner of Main and McGlohon streets in downtown Ahoskie has been home to various municipal departments.

Over the years it has served as the town hall, police station and fire station. Now the formidable structure sits empty as the town’s fire station has a new home on Dr. Martin Luther King Jr. Drive.

While Ahoskie Fire Chief Ken Dilday beams with pride over the new and modern facility, one encompassing nearly 13,000 square feet, he paid tribute to the old fire station that despite cramped quarters served the department well for decades.

“The town acquired that building in the 1950’s,” Dilday said. “It wasn’t intended to be used as a fire department; to the best of my recollection it was originally used to hold court, then the police department was there.”

That facility was actually two separate buildings; the third truck bay formerly used by the fire department prior to the move was an alley way at one time. The alley was closed in during the early 1970’s and transformed into an AFD truck bay.

Those narrow bays, each measuring only eight feet in width, were challenging to those firemen who backed trucks into those small openings.

The official decommission of the old station took place on May 25. The American flag was lowered and the fire whistle sounded one final time from McGlohon Street. The town’s fire trucks then paraded up Church Street, turning onto Martin Luther King Jr. Drive to the home of the new station.

Dilday joined the AFD in November of 1975, under then Chief J.D. Linkous. He rose through the ranks, reaching the pinnacle on Dec. 5, 1987 when he was sworn in as Fire Chief. He has witnessed the business of fire fighting change numerous times through the years.

“Equipment, training, regulations; we’re held more accountable today than when I first joined,” Dilday noted. “Thirty eight years ago we were just a bunch of good old boys who would rush into a burning building without any type of protective gear…well maybe a good pair of gloves, but none of the fire retardant clothing we have today, not to mention all the breathing apparatus of today,” he recalled. “We ate a lot of smoke back then.

“The biggest changes are in equipment and the safety element of our job,” Dilday continued. “Now we have 20 air packs; we hardly even fight a car fire today without putting on an air pack.”

The cost to outfit one firefighter today is more than $2,500 and that’s not counting an air pack. They typically run about $5,000 each.

Then there are the units; depending on how big the pump is on a truck, you’re looking at perhaps no less than a quarter million dollars each. Those trucks need to be insured, just like the firemen, and the pump and air packs are tested once a year, of course at a price.

As is typical with most firefighters, they take pride in both their ability as well as the station they call home. Dilday said his staff, which includes four other full-time firemen and 35 volunteers, are smiling within the new facility.

“It’s boosted our morale, especially the paid staff,” he said. “Look at from where we came; it was old and small (6,000 square feet), but we kept it clean and did a lot of remodeling work up there. The volunteers are happy with this new space as well.”

Other than its spacious new bays (three doubles; room for six vehicles) for the fire trucks, the new station boasts of plenty of storage space, a radio room, laundry room, kitchen/lounge, food pantry and four bedrooms for the paid staff that work around the clock, 365 days a year.

There’s also office space for Dilday, Assistant Chief Eric Whitmeyer and the secretary/treasurer of the volunteers.

Dilday said the new building was a good reflection on the town.

“There have been a lot of capital improvements here in town inside the last 10 years,” he stressed. “It shows that Ahoskie is progressive. This building is part of that improvement. It’s a user-friendly facility with top-notch equipment and top-notch firefighters.”

The new facility was built to serve more than just the Ahoskie Fire Department. It is also the new home of the Ahoskie Code Enforcement/Inspections department and the large squad/training room doubles as the new home for meetings of the Ahoskie Town Council, Planning/Zoning Board, Historic Committee and others.

“It’s a multi-purpose building,” Dilday noted. “The fire department alone runs four functions out of this building; then you add the town’s Building Inspector who has various functions he performs, as well as the Town Council and other town service boards using this building for their meetings.

“We could have gotten by with a smaller building had this only been a fire department, but the town leaders decided to enlarge it and make it where others could use it as well,” he added.

“It’s worth every penny, especially after waiting all these years for a new home for our department,” Dilday stressed. “They did a great job with the design of this building. With the proper upkeep it will last just as long or longer than the old fire station.”

The new location is also a key as the trucks can answer calls faster due to the building’s proximity to Memorial Drive. That major artery through town also has the overpass of the railroad tracks, meaning the fire trucks answering calls will be not be delayed by the train.

“We had some tight turns going out of the old station onto Church or Main streets,” Dilday said. “We only moved about four or five blocks, but the accessibility is much better.”

The new offices of the department are secured; the public can gain access to the main lobby where the town’s fully restored antique 1928 Ford Model A fire truck is on display.

All the volunteers have codes to access the truck bays.

Eventually, Dilday said he will move the fire safety trailer to the new office, now parked at the public works department.

“We’ll take the trailer out to the schools to teach fire safety, but we have the room now to set it up and offer that instruction here,” Dilday said.

An open house for the new building is tentatively scheduled for July 1.