Perhaps he will use that knowledge of rural living on which to build a foundation as the next president of Roanoke-Chowan Community College.

The college’s Board of Trustees announced Monday the selection of Elam as the next president of this educational facility. 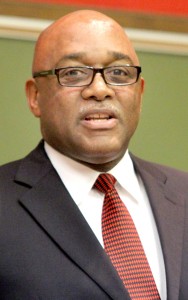 Elam, a native of Henderson in Vance County, will become RCCC’s seventh president since the college was founded in 1967. He is scheduled to assume the role in mid-June upon leaving the Louisiana Community and Technical College System, where he currently serves as Vice President of Strategic Initiatives.

“It’s a homecoming for me,” Elam said in a telephone interview with the Roanoke-Chowan News-Herald on Tuesday afternoon. “I still have family in and around Vance County as well as family up in the Hampton and Newport News (Virginia) area.”

When asked why he considered applying for the RCCC job, Elam said that decision was twofold.

“One, it’s in the northeastern part of the state, close to home and close to family as I’ve already mentioned,” he answered. “Two, I was looking to find a small to medium size school, one I could wrap my arms around and embrace not only the college itself, but the community as a whole.”

Based on his past experience in educational administration, Elam stressed that smaller institutions have the potential for big growth.

“It’s all in the way you lead, and the example you set as a leader,” he said. “I like to build colleges into world class institutions. That’s my intention at RCCC….build the college up and create an economic development powerhouse, one that trains local citizens who are the drawing card to attract business and industry to the area.”

For that to work, Elam said earning the support of the communities that comprise the Roanoke-Chowan area is critical.

“I’m not the type to sit in an office all day; you will see my face in the communities this college proudly serves,” he noted. “I plan to go out and meet the local citizens. I want them to ask questions; I want to hear what they want, what they expect from this college. What I hear I can take back to the trustees; back to the staff and we can work to make it better. I feel it’s extremely important that for the college to be in tune with the community, my face needs to be in the community, and for the dollars I earn as president of this college to be spent in the local community.”

Not only does Elam hail from a small community, so does his wife, Maxine. He said she was born the rural area of Jamaica, a community known as Jacks River.

“She is aware of what living in a rural area is all about,” Elam said. “Here now in central Louisiana, my job is to visit with six different campuses stretched across the rural parts of the state. Those six campuses total less than 2,000 combined students.”

On the Ahoskie end, Wendy Ruffin-Barnes, Chair of the RCCC Board of Trustees, said the decision to hire a new president was a tough task, but was made easier thanks to the input from the local community.

“This will mark an important milestone for RCCC and I invite all to join me in welcoming Dr. Elam collectively and on behalf of all students,” said Ruffin-Barnes. “It is also important for me to acknowledge the involvement and contribution of the community, college employees, and students.  Their active participation in the public forums enriched the process.”

The trustees selected Elam over two other finalists for the job – Dr. Peggy Bradford, interim president at Baltimore City Community College in Maryland, and Dr. Algie Gatewood, president of Cascade Campus of Portland (Oregon) Community College. Two public forums for each of three candidates were held last month and feedback from participants was used as part of the selection process.

The local board recommended Elam’s name to the State Board of Community Colleges who made the final decision on Elam at their meeting late last week in Raleigh.

With more than 32 years of experience in higher education, Elam holds a Bachelor of Science in Zoology and a Master of Education in Student Personnel and Administration from Howard University, Washington, DC, and a Doctorate of Education in Higher Education Leadership from Nova Southeastern University, FL.

Elam and his wife are the parents of two adult children – a daughter, Mikala, who resides in Pennsylvania, and a son, Matthew, who lives in Florida – and the grandparents of two.