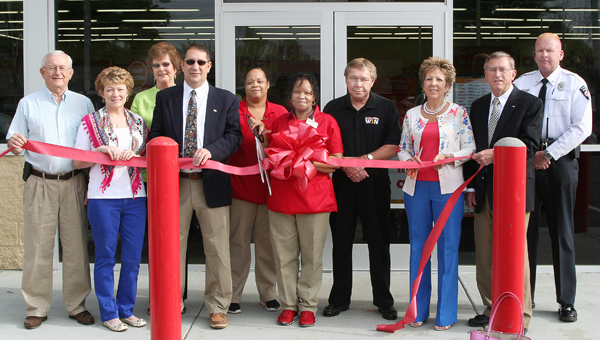 On Saturday, Town of Conway and Northampton County Chamber of Commerce officials joined employees of the new store for a ribbon cutting.

“We’re very excited to be here,” said Frank Will, Family Dollar District Manager. “We believe this will be a very good store for us.”

On Saturday morning the store was busy with customers coming in to browse the shelves.

Mayor Brian Bolton said he was surprised to see the building constructed so fast. Construction of the store began at the end of last year.

“I think citizens are going to be supportive of having the store here,” he said. “There was a lot of interest before the store opened.”

Bolton added that he hoped the store will attract other businesses to the area.

County Commissioner Joe Barrett also welcomed Family Dollar to the community and the county. He called the placement of the store a “progressive step” for Northampton.

Family Dollar traces its roots to 1958 where a 21-year-old entrepreneur with an interest in merchandising became intrigued with the idea of operating a low-overhead, self-service retail store. Leon Levine believed he could offer his customers a variety of high-quality, good value merchandise for under $2. Because he had grown up in his family’s retail store, he understood value, quality and customer satisfaction.

In November 1959, Levine opened the first Family Dollar store in Charlotte, NC and was on his way to becoming a retailing legend. Right from the start, he had a well-developed philosophy of what Family Dollar would be and how it would operate, a philosophy from which he and his management team have never strayed. The concept is a simple one, “the customers are the boss, and you need to keep them happy.”

He created a general floor plan that he used in each of his stores that allowed customers to easily shop for their favorite products in any Family Dollar store. With the stores uniformly laid out and stocked, store managers were able to focus on providing good customer service. This concept for a self-serve, cash-and-carry neighborhood discount store in low to middle income neighborhoods proved so successful that today Family Dollar is a chain with over 7,600 stores from Maine to California….the latest of which is now open in downtown Conway adjacent to the corporate office of Watson Builders.

Other Family Dollar stores in the Roanoke-Chowan area include Ahoskie, Colerain, Rich Square, Sunbury, Winton and two locations in Windsor.

RALEIGH – An advocate for a first-rate public education system for all North Carolinians has gone on the record to... read more