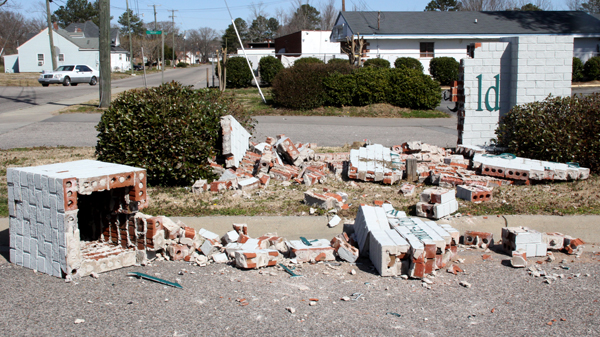 Brick and mortar litter the entrance to the Roanoke-Chowan News-Herald parking lot as a result of a weekend accident. Staff Photo by Cal Bryant

AHOSKIE – This newspaper became the news over the weekend.

The brick sign located at the main entrance of the Roanoke-Chowan News-Herald was destroyed Saturday morning when the driver of a pick-up truck apparently ran off the left side of Catherine Creek Road.

Kavon Jante Phillips, 23, of 196 Lincoln Park, Rich Square was cited with failing to stop at the scene of a vehicle collision when property damage is present.

Damage to the sign was listed at $3,000 in a report filed by Ahoskie Police Officer Melanie White. There was also damage to a guide wire of an electrical service pole believed to be owned by NC Power.

APD Lt. Adam Benton was the first to report the damaged sign while he was on routine patrol at around 8:30 a.m. Saturday. There was not a vehicle present at the accident scene at that time.

“Lt. Benton did discover parts to a vehicle at the scene, to include headlights, the center grill and a turn signal assembly,” said Ahoskie Police Chief Troy Fitzhugh. “He and other officers were aware of a damaged pick-up truck that was parked and abandoned at the Wilco Hess station at Main Street and Academy Street. The parts found at the News-Herald accident scene matched that truck and the vehicle was impounded.”

The truck, a 1993 Nissan, suffered an estimated $3,500 in damage. It is owned by Walter Lee Edmonds Jr. of US Highway 258 in Rich Square. Fitzhugh said that Phillips was a friend of Edmonds’ son.

“Once Mr. Phillips came back looking for the truck at Wilco Hess, he admitted to my officers that he was responsible for the damage at the News-Herald and had left the scene of the accident,” Fitzhugh said.

The accident report revealed that speed was not a factor in the crash.

Roanoke-Chowan Publications began the process on Monday with getting estimates to replace the sign.