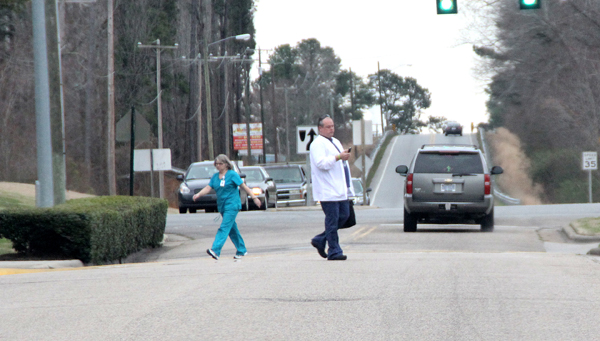 Two employees of Vidant Roanoke-Chowan Hospital cross Memorial Drive near the intersection of Academy Street. Hospital and town officials are coordinating their efforts to promote pedestrian safety in this area by installing crosswalks and signage. Staff Photo by Cal Bryant

AHOSKIE – Despite its small town status, Ahoskie has its fair share of motor vehicles in constant transit on streets and highways.

Mix in that ingredient with a high volume of pedestrian traffic and the recipe for safety becomes compromised.

With that in mind, town of Ahoskie officials have approved a measure to address at least one area busy with pedestrians – the streets near Vidant Roanoke-Chowan Hospital.

At their monthly meeting here Tuesday, members of the Ahoskie Town Council learned of a safety issue concerning hospital staffers and visitors crossing the street to gain access to the medical facility.

Ronald Cullipher Jr., Captain of the Vidant Roanoke-Chowan Hospital Police, addressed Council during the public input portion of the meeting. He passed out photos of proposed crosswalks on two streets that will increase the safety of pedestrians.

He told of an employee of Vidant Medical Center in Greenville that was killed a few months ago while crossing the street near that hospital.

“That has prompted hospital staff there to look at putting in more pedestrian crosswalks as well as street signage to make the motorists aware of the pedestrian crossings,” Cullipher said. “A lot of the other hospitals in the region are noting the same safety concerns.”

Additionally, Cullipher mentioned that few RCH offices (Payroll Department, Human Resources and a Business Office) are located on the Sunset Street side of the hospital, meaning employees there are crossing that street.

“We have been monitoring the pedestrian traffic, our employees and visitors to our facilities, crossing both streets,” Cullipher said. “We’ve noted numerous individuals as pedestrians and we feel this is a safety concern.”

With the help of RCH employees, Cullipher put together a plan that calls for the installation of three crosswalks – two on Memorial Drive and one on Sunset Street. Currently there is one marked crosswalk on the Memorial Drive side of the hospital.

“We want to make that one safer with better markings, a higher visibility to motorists using that street, as well as installing one more crosswalk on Memorial and the other on Sunset,” he said.

Cullipher also asked the town to install additional signage to alert motorists to the crosswalks.

“The motorists will note those signs and know that the town considers this area as an official pedestrian crosswalk,” he stated. “That will heighten the element of safety for our employees and visitors.”

Even though no pedestrian, hospital employee or private citizen, has been struck on either street near the hospital, Cullipher said there have been several close calls.

“By marking these three areas as official crosswalks it will prevent anyone from getting hurt,” he stressed.

“What you are proposing should improve the level of pedestrian safety in those high traffic areas around the hospital and is very cost efficient on the town’s part,” said Ahoskie Town Manager Tony Hammond.

Ahoskie Town Councilwoman Linda Blackburn, whose residence is located just west of the hospital, said she has noticed the high volume of pedestrian traffic along the one block of Memorial Drive adjacent to RCH.

“I make it a habit to stop at that one crosswalk there now when pedestrians are crossing,” she said. “My biggest concern is that particular crosswalk is located just a short distance from the intersection (of Memorial and Academy Street). When you have a vehicle turning right off Academy and whipping onto Memorial and there is a car, maybe two, stopped for pedestrians at that crosswalk, that’s a rear-ender (accident) waiting to happen. I’m wondering if (crosswalk) signage should be placed on Academy near that intersection to warn people that the crosswalk is very near.”

Later in the meeting, Councilman Malcolm Copeland made a motion to approve the town installing the three crosswalks and signage. Councilwoman Elaine Myers offered a second and the motion was approved without objection.

Hammond said the town will bear the costs of marking the three crosswalks and signage.

A North Carolina man found murdered on Tuesday in Isle of Wight County had been living with his grandparents in... read more