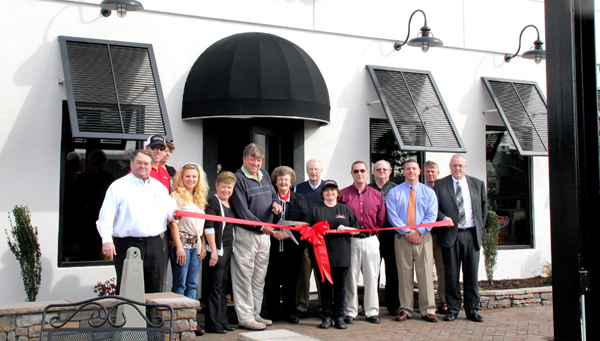 Joined by a few of his employees along with officials from the Town of Ahoskie and the Ahoskie Chamber of Commerce, Gerald Abrams (sixth from left) cuts the ribbon to formally open his new restaurant located on Memorial Drive. Staff Photo by Cal Bryant

AHOSKIE – Judging by the long lines, inside and out, a new restaurant in Ahoskie is proving popular among those seeking a hearty meal.

Abrams BBQ has opened in Ahoskie, ending an 11-month wait while an existing building on Memorial Drive was being completely gutted and refurbished. Abrams founder, Gerald Abrams, his son, Jerry, who will manage the Ahoskie restaurant, local employees of the eatery and Ahoskie officials joined together on Wednesday to conduct a ribbon-cutting ceremony to mark the official opening.

“We’re extremely happy to be in Ahoskie and have felt welcomed here since we announced our intentions in February of last year to expand our chain of restaurants to Ahoskie,” said Jerry Abrams.

“But what we’re really happy about is putting local people to work,” Abrams added, noting the 20-plus employees at the Ahoskie restaurant. “There’s a lot of people all across our state and nation without jobs and as a small business owner nothing makes you feel good more than offering employment to those who need it the most.”

To date, those employees are busy….preparing and serving good, old-fashioned Southern cuisine to hundreds of customers that have flocked to Abrams since it opened in Ahoskie on Friday, Jan. 25. The restaurant is famous for its ‘Carolina style pork barbecue, chicken and ribs. It also serves seafood and features a daily buffet as well as serving breakfast, ranging from biscuits (home of the original cheese biscuit) to a complete platter.

Based in Tarboro, Abrams traces its roots back to 1974. The family-owned business has branched out to Pinetops, Wilson, Greenville, Scotland Neck, and now, Ahoskie.

“We had been talking about opening a restaurant in Ahoskie for a while,” said Jerry Abrams. “We’ve had some folks from Ahoskie come all the way to Tarboro to eat at our restaurant there, especially our seafood buffet. We see this new location in Ahoskie as good for the citizens of this area and for us as well.”

The Ahoskie location once served as the home of Hardees (later, Popeyes). To assist with Abrams expanding to Ahoskie, members of the Ahoskie Town Council unanimously agreed in February of last year to apply for a Building Reuse and Restoration Grant through the NC Rural Center. That application was accepted as the Rural Center awarded the town $160,000 for the project.

In turn, the town had to put up a 10 percent match – five percent to be applied to the building’s renovation and another five percent to cover the grant administration fees. Prior to voting to accept those conditions, the council members discussed a return on the town’s investment, which Ahoskie Town Manager Tony Hammond said could be recouped over two to three years in property tax and sales tax revenue.