AHOSKIE – They may have been small in number, but their impact is huge.

Local citizens and community leaders gathered here late Tuesday afternoon in the Roanoke-Chowan Community College auditorium where they participated in the second of two public forums hosted by the RCCC Board of Trustees, a group that has formally launched its search for a new president of the college. 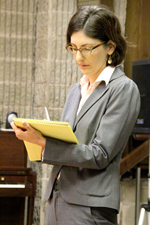 A similar forum was conducted earlier in the day on Tuesday, one where the majority of the participants were either students enrolled at RCCC or members of the college’s staff.

“We feel it’s extremely important to engage the community – the public as well as our students and staff – in this process as we move forward with our search for a new president,” said Wendy Ruffin-Barnes, chair of the RCCC Board of Trustees. “As I’ve stated before when we initially announced the start-up of our search, we will keep the community informed as this process continues. RCCC is their community college and we feel having the best leadership here is a win-win for our students, our staff and the community.”

Dr. Harold Mitchell, RCCC’s interim president, opened Tuesday afternoon’s forum before turning the event over to Julie Golder Alion, a presidential search consultant employed by the Association of Community College Trustees (ACCT), a Washington, DC based firm under contract by RCCC to lead the search for a new president.

“We want to know how you think about our search for the next president of this college and what qualities that person needs to possess,” Dr. Mitchell said. “Your input is very important as this search process begins.”

Alion asked those in attendance to think about RCCC’s “big picture” – the challenges and opportunities facing the college’s next top administrator over the next three to five years.

As the public spoke, Alion listed their comments as part of a draft presidential profile.

“That profile, once approved by the (RCCC) trustees, will be posted to a website dedicated to this particular search process,” Alion. “The profile serves a dual purpose, it keeps the college community informed of this process, and the characteristics/qualities the next president needs to embody. This profile helps to attract candidates that feel RCCC is a right fit for them. Savvy candidates will read this profile very carefully.”

The feedback was broad in nature, starting with input from a young man who stressed the need for the president to make it a priority to help students by keeping his or her door open, listening for new and innovative ideas.

Other comments shared addressed the college’s need to increase enrollment through more diverse course offerings; the college’s next leader needs to know, fully understand and address the needs of the local community (improving the climate between RCCC and the communities it serves); improving the school’s brand image (the days of the old RC Tech are over); design a curriculum that yields success; and connect students to community resources.

The discussion turned briefly towards the need of having a new president, as well as their spouse, that understands rural communities…..thus preventing the culture shock sometimes associated with moving a family from an urban to a rural setting.

There was a suggestion that the new president needs possess a history of being a college-level administrator; being mission minded and know they can expect feedback from the local community; have knowledge of how to tap into resources offered by the state system of community colleges; and be required to not only live in one of the local communities served by RCCC, but interact locally as well.

A timeline of the search process includes hopefully having early March as the target date to have the applications in-hand. By the second week of March, following discussion and deliberation of the applications by the trustees, the list of candidates will be trimmed to six-to-eight semifinalists. One week later it is hopeful that list will narrow to three-to-five finalists.

If the search does not experience any problems along the way, a new president can be announced as early as the second week of April.

Ruffin-Barnes said the plan is to introduce the finalists to the local community and have them available on campus in an effort to allow the public to meet them. Up until that point the names of all candidates will be kept confidential.