One down, one to go

AHOSKIE – One of two individuals wanted in connection with an early December shooting and a vehicle chase that subsequently led to a wreck and jump-and-run is now behind bars.

Brenyetta Johnteice Rascoe, 18, of Bakers Store Road, Woodland, surrendered to the Ahoskie Police on Friday morning. She was served with two felony warrants, conspiracy and accessory before the fact, according to Ahoskie Police Chief Troy Fitzhugh. 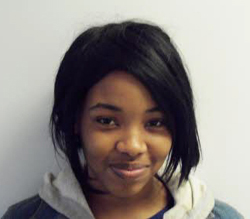 Rascoe was placed under a $75,000 secured bond. Fitzhugh said that because she was unable to satisfy the bond, she was confined to the Hertford County Jail.

Anyone with information on this person is asked to contact Captain Michele Garrett with the Ahoskie Police Department. She can be reached at (252) 332-5012.

This case stems from a series of crimes on Dec. 6, beginning with an individual being shot as he sat in his car on North Academy Street. Fitzhugh said the wounds suffered by the victim were not considered as life threatening.

Sgt. R.W. Sawyer of the Ahoskie office of the North Carolina State Highway Patrol said he and fellow NCHP troopers were involved in a short chase of the suspects’ vehicle shortly after they received information about the shooting. That vehicle was involved in an accident approximately one-quarter of one mile west of the WRCS/WQDK radio station on NC 42. There, the alleged get-away vehicle, traveling west on NC 42, crossed the eastbound lane, exited the roadway, ran through a ditch and flipped one and one-half times before coming to rest in the yard of the residence.

The suspects within the overturned vehicle – two of them believed to be Brenyetta Rascoe and Jonathan B. Rascoe – managed to flee the scene on foot into a nearby woods.