AHOSKIE – A family of seven was left homeless after a fire destroyed their home near here Thursday afternoon.

The three-alarm blaze summoned a total of seven units and 29 firefighters to the residence, located at 1348 US 13  South. There, the first Ahoskie units on the scene faced a home that was fully engulfed in flames.

“The fire was rolling; it was intense when we first arrived,” said Ahoskie Rural Fire Department Chief Michael Bradley.

Bradley said the home was owned by Rosa Sessoms and rented to Lorrain Sanders, who lived there with her husband, two daughters, and three grandchildren.

“There were three individuals inside the house at the time of the fire,” Bradley said. “The husband was out in the yard when he said he heard a popping noise, looked and saw the house on fire. He went in and got everyone out to safety.”

Bradley said he was not 100 percent certain of the cause, but believed it may be electrical in nature, perhaps igniting somewhere on or near the back porch.

The Ahoskie firemen (the rural and town departments) were dispatched to the scene at 3:25 p.m. and arrived five minutes later. Bradley had the Winton Fire Department dispatched to provide additional manpower due to the intensity of the blaze and because of the affected home’s close location to other structures.

The last Ahoskie Rural unit cleared the scene at 6:23 p.m.

With so many emergency vehicles responding to the scene, US 13 was closed between Bojangles and Modlin Road. The Ahoskie Police Department and Hertford County Sheriff’s Office provided traffic control, eventually reopening the road at 5:31 p.m.

Hertford County EMS was also on the fire scene with one unit. 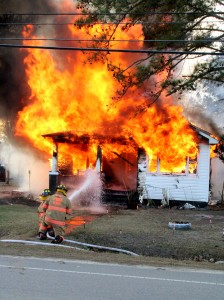