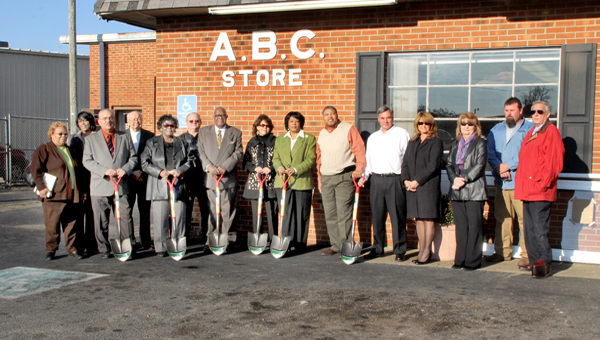 AHOSKIE – Out with the old, in with the new.

After decades of serving the public, the old Ahoskie ABC Store, located at 1373 East Memorial Drive, will give way to a new facility at the same location.

On Monday, members of the Hertford County ABC Board gathered with other local officials and contractors to formally break ground on the new store.

“The new store (2,550 square feet) will be nearly twice as large as the old store (1,400 square feet),” said Clarence M. Jordan, General Manager of Hertford County ABC. “We’ll have additional shelf space to display the products we offer for sale.

“What we’re doing is completely demolishing the old store and starting over with a brand new building,” Jordan continued. “The new store will be like the old one as it will be attached to our storage warehouse.”

That warehouse will serve a dual purpose during the construction of the new store as it will also be the temporary home of retail sales. The entrance is located in the back left corner of the warehouse.

“We ask our customers to please forgive us for any inconvenience this will cause over a short period of time,” Jordan said. “There’ll be only one door to enter and exit the temporary retail sales area, but we did figure out a way to rearrange things in the warehouse so we could still offer self service sales while the new store was under construction.”

Following a bidding process, R&L Builders of Rocky Mount was awarded the construction contract for $251,450. Jordan said they will begin work immediately on the project.

“The contract calls for a six-month construction period, but if the weather cooperates we’re hoping for three months to have the new store built and opened for business,” Jordan stated. “We feel very good about the quality of the people we hired for this job. The architect (William Dove) designed the new ABC store over in Gates County. The builder has constructed several ABC stores, including the one in Gates County and another one over in Tyrrell County. They know what they’re doing with these types of projects.”

In June of last year, Jordan announced to the Hertford County Commissioners of the local ABC Board’s intention to build the new store. Funding came from the ABC Board’s working capital, which required the commissioners’ approval; given in September of last year.