AHOSKIE – It’s not a merry time of the year for seven Ahoskie citizens.

The blaze – reported at 2:59 p.m. at 410 North McGlohon Street – was confined to a dual-story home split into two apartments (one each upstairs and downstairs). 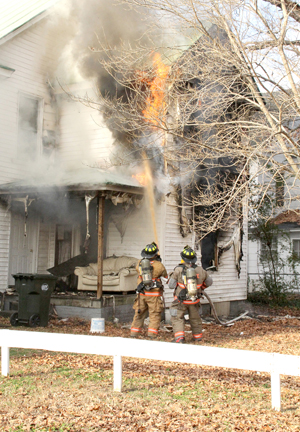 “I was the first fireman on the scene and when I saw flames blowing out one of the windows downstairs and curling upwards I knew right then that we had our work cut out for us,” said Ahoskie Fire Chief Ken Dilday. “Our initial attack (to extinguish the fire) was what saved the house from total destruction. The guys did a great job, both inside and outside. Because of their efforts the main structure was saved as well as there being no damage that I know of to the houses on either side.”

Dilday said the rear of the house suffered the most extensive damage.

“That’s where the fire started, on the back wall in the kitchen of the downstairs apartment,” he noted.

Dilday added that an investigation by Ahoskie Police Detective Sgt. Stephen White, who first worked the scene as a volunteer firefighter, revealed the blaze was sparked by some sort of electrical problem.

“No one was cooking in the kitchen, so we immediately ruled that out as a possible cause,” Dilday stated.

The home is owned by Jerome Burden of Ahoskie. Apartment A (downstairs) is rented by Roberta Campbell and she shares that space with her brother, cousin and granddaughter. Wilma Moore rents the upstairs apartment where she lives with her two daughters.

Dilday said the American Red Cross arrived in Ahoskie early Thursday evening to assist the individuals impacted by the fire.

“The downstairs apartment is pretty much unusable,” Dilday said. “The heat there was so intense that it melted a television set near the front of that apartment. There may be some items that can be salvaged upstairs.”

Ahoskie Police Chief Troy Fitzhugh said he was near that area on Thursday afternoon when he noticed black smoke coming from the home.

“I immediately went to the residence and a man, woman and child were exiting the home at that time; another lady came out soon afterwards,” Fitzhugh told the Roanoke-Chowan News-Herald who was on the scene.

Fitzhugh added that he knocked on the doors of neighboring homes to alert them to the situation.

Dilday said his department responded with three units while Ahoskie Rural sent its new ladder truck. A total of 18 firefighters, including one from Murfreesboro, battled the blaze. The last Ahoskie unit cleared the scene at 5:43 p.m.

Hertford County EMS was also on the scene, as were the Ahoskie Police who provided traffic control.

The impact of 20 students killed Friday at an elementary school in Connecticut was felt far and wide, including education... read more