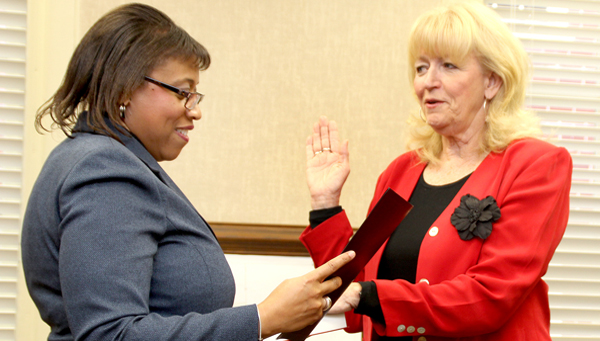 Linda Blackburn (right) accepts the oath of office as a member of the Ahoskie Town Council from Town Clerk Joleatha Chestnutt. Blackburn was appointed by Council to fill the unexpired term of O.S. “Buck” Suiter Jr. who resigned in November. Staff Photo by Cal Bryant

AHOSKIE – Three seats to the left….that’s how far Linda Blackburn moved since the last time she sat in a position of authority on the Ahoskie Town Council.

Blackburn, the town’s former Mayor, was sworn in on Tuesday morning as the Council’s choice to replace O.S. “Buck” Suiter Jr. who resigned his seat effective at the close of the board’s November meeting. Suiter had one-year remaining on his four-year term.

“Thank-you to this Council for giving me the opportunity to come back and re-join this team,” Blackburn said later in the meeting. “I’ve always been a team player and that hasn’t changed during the year I’ve been away from you. I look forward to this opportunity to serve this town.”

Blackburn added that she was very aware of the size of the shoes she has been asked to fill.

“I’m very humbled to be sitting here in this particular seat,” she said. “Mr. Suiter leaves a big seat, big shoes to fill. He brought a lot to this table and to the citizens of this town.”

Blackburn also shared remarks on comments she has heard regarding having more young people involved in town government.

“I apologize to ya’ll because I can’t be any younger, but what I do bring to the table is experience,” she stressed. “There’s nothing wrong with experience. What I’m hopeful of is that more young people will start to serve this town, first being appointed to committees and learn from us who are more experienced. That way they can learn the system from the ground up and that will prepare them to take the next step to the seats around this (Council) table.”

Two of Blackburn’s Council colleagues, Elaine Myers and Malcolm Copeland, welcomed their former Mayor back to the board.

“Linda, you do have a big seat there to fill; Mr. Suiter made significant contributions to this town during his many years on this Council,” Myers noted. “But we are very much aware of what you can bring to this table. We welcome you back and look forward to working with you for the betterment of the Town of Ahoskie.”

“Linda, we do welcome you back,” said Copeland. “You are sitting in a big chair, but you did a lot of big things when you were our Mayor; all one has to do is look around this town to see that. You have proven yourself as a leader and a team player and I look forward to working with you as this town continues to grow.”

Blackburn was sworn-in by Joleatha Chestnutt, clerk to the Council. She had previously served the town as its Mayor over an eight-year period (2003-11) before being defeated by current Mayor Brien Lassiter during the 2011 municipal election.

In another matter addressed by the Council in regards to Suiter’s resignation, they needed to find a replacement since he served the town as its Mayor Pro Tempore. When the floor opened for nominations, Copeland placed the name of Myers into consideration. Councilman Maurice Vann offered a second and Myers was elected Mayor Pro Tempore by a 4-0 vote. Councilman Winfred Hardy was absent from Tuesday’s meeting.

Suiter, a 25-year veteran of the board, announced his resignation during the Council’s October 9 meeting. As far as to what led him to resign, Suiter said there were “a whole lot of reasons, but I guess the main one is that I feel that this is the right time. I’ve enjoyed my many years of service here and I’d like to thank the citizens for allowing me to serve them.”

Suiter first joined the Council in 1983, appointed to fill an unexpired term. He was elected to the same seat later that year and earned reelection through 1991 at which time he had to resign due to work-related commitments – traveling statewide through his position with what was then Centura Bank. He was appointed back to the Council in 1994 to fill yet another unexpired term and has served continuously, through numerous elections, until officially resigning at the close of the Council’s Nov. 13 meeting.