‘Beat’ of a champion 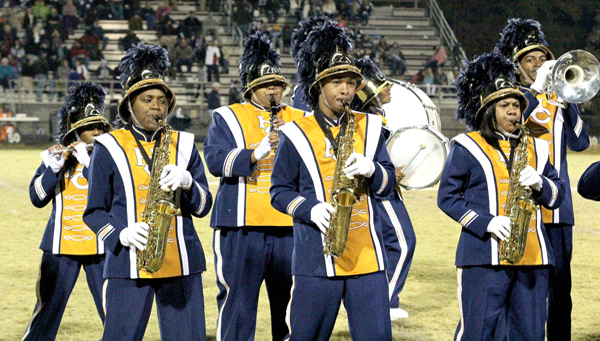 AHOSKIE – From worst to first.

The Hertford County High School “Soul Sonic Force” Marching Band made that long climb in just one week’s time earlier this month where the local group of young musicians was crowned as the Division 2A State Champions following an outstanding performance at the 4th Annual North Carolina Showstyle Band Director’s Association State Competition held in Durham.

While the first place showing at the state level is unprecedented in HCHS history, what made this feat even more special was the fact that the “Soul Sonic Force” finished dead last one week earlier during a competition held at E.E. Smith High School in Fayetteville.

“We used that disappointment and turned it into a teaching moment,” said HCHS Band Director Ferdinand Cooper. “I told them there was a reason for that last place finish. I challenged them they were better than that and challenged them to work harder.”

Cooper continued, “They put in a lot of heart, a lot of dedication after the competition in Fayetteville…they started to teach themselves how to be better. I let them critique their own effort so they could see and hear what they needed to improve upon.

“In Durham we faced some good bands in our class. I just asked them to do your best job and let the chips fall where they may. It was easily our best performance of the year,” Cooper added.

Along with those awards, the HCHS Marching Band scored the third highest score in Music out of 12 bands.

Now in his second year at HCHS, Cooper introduced a few new wrinkles into the established band program at the school. He also banked on his experience as a high school and college musical performer and the fact that he was a “band brat” – his father was a high school band director for 35 years in South Carolina.

“I inherited a very good program from (former HCHS Band Director) Frank Williams; he laid the groundwork, he established a sense of family and I wanted to continue that,” Cooper said. “One of the changes I made was to get the band into more regional competitions. I had a three year plan presented to the students and parents. I wanted to exposure them to more areas outside Ahoskie and introduce them to the competitive atmosphere. It pushed them to work harder.”

That hard work, coupled with the humbling last place finish in Fayetteville, reaped dividends in Durham.

“At the state competition all the bands were judged by those involved at the collegiate level, so their scores, to me, are more critical in nature,” Cooper noted. “We went into the state finals with a list of goals we had set for scores from the judges. We hit four of our six goals. The biggest shock was of the 12 bands in our division we had the third highest music score. That shows once you put your mind to the little things, master the small things, big things can happen.”

Even though the main portion of the season (football game performances) is over for the 67 members of the HCHS Marching Band, they still have a busy agenda ahead. They will participate in five Christmas parades; play (in a smaller group) at basketball games; and a have a late January trip planned to the Honda Battle of the Bands at the Georgia Dome in Atlanta.

“When our young people put on that band uniform they are representing their school, the local community, me and themselves,” Cooper said. “We want our band, our young people, viewed in a positive light, whether they are performing here in Hertford County or outside our little corner of the world. I think we’ve done a good job in making them see that bigger picture as we’ve instilled a sense of discipline within our band members. After all, when you are the state champion you have to live up to that billing.”