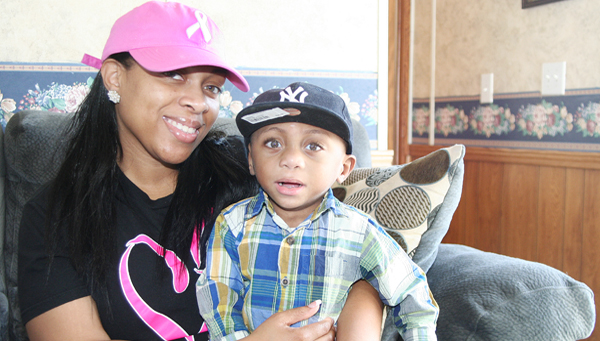 Tiffanie Watford sits with her son, Jeremiah, who is nearing his second birthday after beating the odds of surviving a birth that was 15 weeks premature. Watford is now fighting her own battle of survival after being diagnosed with Stage 4 breast cancer. Staff Photo by Amanda VanDerBroek

AHOSKIE – Tiffanie Watford feels most comfortable when she’s armed with a plan.

However, for the past two years there seems to have been another plan for her, one out of her own control.

Nearly two years ago, Watford gave birth to her son, Jeremiah, who was born 15 weeks premature. In September, Watford learned of her own battle ahead when she was diagnosed with Stage IV breast cancer.

“I just think everything happens for a reason and if you have to go through that, you were built to endure it,” said the 26-year-old. “I always think Jeremiah came to me like a little blessing. I think everything I went through with him was to strengthen my faith and make me a stronger person.”

With unfailing faith, courage and determination, Watford intends to roll with the unexpected plan before her, just as she did when her son was born in December 2010.

At 24 weeks of pregnancy Watford began to have contractions, which doctors were able to stop for a short time.

“At 25 weeks and one day is when they told me that I would need an emergency C-Section,” she said.

Watford said by then, Jeremiah’s heart rate was dropping so quickly there wasn’t enough time for an epidural and doctors opted for general anesthesia.

“So I wake up to a room full of 20 people and everybody is looking at me,” she said. “I didn’t know how to ask if my baby was alive.”

Despite being born without a heartbeat, Jeremiah had survived, but was in critical condition. Watford’s son was only 12 inches long and weighed a mere one pound and four ounces.

“It took about 18 minutes for them to get his heart to start and get him on a respirator,” she said. “He was 10 days old before I could hold him. …I cried the whole time because when you’re a mom you think when your child is born you’re just going to hold it. You never think that days or even weeks can go by before you can hold your child. ”

At one month of age, Jeremiah developed necrotizing enterocolitis (NEC) a condition typically seen in premature babies where portions of the intestines undergo necrosis (tissue death).

Jeremiah’s NEC was so severe he couldn’t be moved and had emergency surgery in the NICU.

“They cleared all the babies off the hall and did his surgery in his room,” she said.

That first surgery was followed by several more. Jeremiah was able to go home 138 days after his birth, where he was still in need of 24-hour care. The demands of Jeremiah’s medical needs led to Watford losing her job and her home, forcing her to move in with her stepfather.

With the exception of a feeding tube, Jeremiah, who will be two years old next month, is your typical rambunctious toddler who enjoys getting into everything.

As soon as her son’s medical condition improved, Watford decided to focus on her own life. In March she began work with the Roanoke Chowan Domestic Violence Task Force, utilizing her bachelor’s degree in criminal justice and master’s in education with a concentration in counseling.

Watford had also secured a home for her and Jeremiah and she was engaged to fiancé, Michael Williams.

Life seemed to be returning to normal.

But Watford’s best laid plans once again changed when in August she noticed a persistent pain in her arm. At first she attributed it to a pulled muscle.

“I thought it was me doing too much,” she said. “So I was putting medicine on it and instead of it getting better, it got worse.”

After a trip to the doctor’s office, an X-ray revealed a tumor on Watford’s humerus bone and there was a 50 percent chance it was cancer. To make matters worse, the doctor said the cancer could be metastatic.

“I’m 26. It almost seemed impossible for me to know I could have cancer,” she said.

Tests were ordered immediately for Watford and a CT scan revealed a shadow in one of her breasts. A mammogram and ultrasound confirmed the shadow was a tumor. Two days later, a biopsy of the breast tumor revealed cancer.

“I didn’t know what to say,” she said. “I was in shock. It was like an out of body experience.”

Another biopsy of the humerus tumor revealed breast cancer cells and Watford was diagnosed with Stage IV breast cancer.

The humerus tumor had fractured Watford’s bone to a point where she needed surgery. Three screws and a nail were placed in Watford’s arm.

After the surgery, Watford’s mother Linda who resides Conway, moved in with her daughter to help out. Watford could not pick up her son and even the littlest tasks, like brushing her teeth, was taxing.

“I had to tap into some inner strength, the same strength that I had to get me through Jeremiah,” she said. “I had to find it again to pull me through my own situation.”

Watford has just completed 20 days of radiation treatment for the tumor on her arm and she will begin chemotherapy on Nov. 28.

But before that next battle comes, Watford and Williams married Saturday (Nov. 17) in a ceremony at Rountree Temple in Powellsville. The couple had planned to get married next year, but with Watford’s diagnosis Williams insisted on pushing up the date.

Watford credits Williams for steadfastly standing by her and Jeremiah, who is not his son.

“He helps me through anything and everything,” she said.

On a day when the couple should be on their honeymoon, Williams will be driving his wife to Chapel Hill to get a port for her chemotherapy treatments.

“No newlywed thinks after they get married they’re going to see their mate go through chemo,” Watford said. “Just for him to know what we have coming and his love hasn’t changed, if anything it’s grown. He’s told me ‘Whatever comes, I’m going to be there’.”

Watford said Williams and her mother are just two people of many who are providing a support system for her.

Watford also draws strength and inspiration from her faith as well as Jeremiah.

“To see him now I know that the Lord really blessed us. I think that prepared me for this,” she said. “When I look at Jeremiah and remember back, I believe the same God that did it for Jeremiah can do it for me. I’ve never doubted if I’m going to live. I’ve never asked God why. I just look at it as there’s a reason. Just like there’s a reason for Jeremiah being born and showing me that miracles happen. I know for sure I can get a miracle too.”

WINDSOR – It’s all about family. Bertie High School senior Brook Bowen said it was her family – both literal... read more