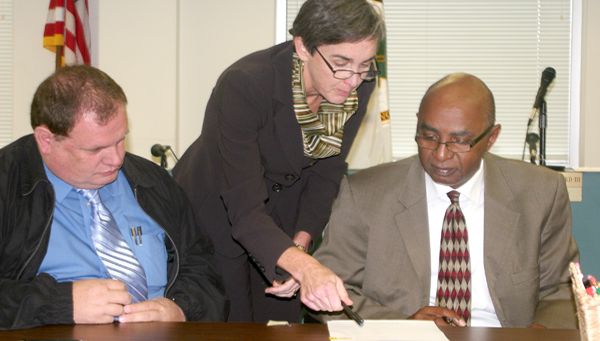 WINDSOR – The papers are officially signed.

“It was a great day for the future of education in Bertie County, particularly students and their parents” Hoggard said.

The commission chairman said much had been done to improve educational facilities over the last several years, including upgrading elementary schools and building a new Bertie Middle School. He said the new high school was the next step, though he hoped it would have been accomplished sooner.

“It’s long overdue,” he said. “We were talking about it when I came on the board 12 years ago and I guess it’s somewhat ironic that it is one of the last things we were able to accomplish before Mr. (Norman M.) Cherry and I leave the board.”

Hoggard said he knew some said bricks and mortar wouldn’t make the high school better, but he also knew no one still turns a washing machine by hand since electrical ones are available.

“The future will be available at the new Bertie High School,” he said. “Students will have access to technology and better places to learn and grow.”

Hoggard said he looked forward to visiting the new school upon its completion and to attending basketball games in the new gym.

Two of the other commissioners were in attendance at the signing. Cherry and Charles L. Smith, both retired educators, were present while the paperwork was authorized.

“I don’t know a word to describe how I feel – happy, excited, all of those words come to mind,” Cherry said. “After 10 years of working toward this goal it appears to be finally coming true.

“Of all the things we’ve accomplished during my tenure as a commissioner, I can’t think of one that outranks this one,” he added. “All of them were important, but this one is a high one.”

Cherry said he felt the new facility would impact the entire county, not just parents and students particularly because of the construction of the auditorium which he believed will be a focal point for the community.

“We started talking about this originally in the mid 1990s and it’s finally here,” Cherry said. “It is like a parent waiting for the birth of a new child or a kid waiting for Santa Claus.”

Smith said he was also excited about the school finally coming to fruition.

“I’ve been on the board since 2007 and it has been put off too many times,” he said. “It is something that is greatly needed and I hope will bring the county together.”

Smith said it has been a priority during his term on the commission.

“It is one of the main things I wanted to get done,” he said. “I knew the high school was falling apart. The way it was built was fine then, but it is dangerous now. I think the new school will be better for teaching and learning and for the protection of our students, faculty and staff.”

The paperwork to complete the process took place after the sale of nearly $21.5 million in bonds on Nov. 5.

The county went to the market and sold slightly more than $18 million Qualified School Construction Bonds. The interest rate to be paid on those bonds will be 4.667 percent, but the county will receive a federal reimbursement of 4.32 percent, meaning they will pay less than half a percent of interest.

WINDSOR – The Bertie County Board of Education is proceeding with the sale of two pieces of property that are... read more