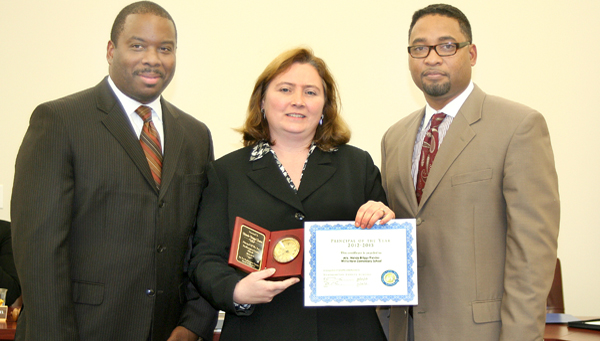 Wanda Briggs-Trevino displays her Principal of the Year honors while flanked by Northampton Schools Superintendent Dr. Eric Bracy (left) and Kelvin Edwards, chair of the Northampton Board of Education. Staff Photo by Amanda VanDerBroek

JACKSON – Wanda Briggs-Trevino has been named Principal of the Year by Northampton County Public Schools.

At their Nov. 19 meeting, the Northampton County Board of Education recognized Trevino, who is principal of Willis Hare Elementary School, with the honor. Trevino was presented with a certificate of appreciation, a monetary stipend and a commemorative plaque.

“It’s kind of surreal for me because I was born, raised and educated in Northampton County Schools,” Trevino said. “Thomas Wolfe said ‘You can never go home again’, and I’d like to say that I’m a testament to that and it’s not true, that you can come home again.”

Trevino said she has been fortunate in her 10 years at Northampton County Schools to do something a lot of adults do not, return to every place they went as a child and work as an adult.

“I was very fortunate that every school I went to there was adults there working that were actually there when I was a child,” she said.

“So it feels very surreal and I feel very honored to be able to come back and give back to the community that means so much to me and did so much for me as a child,” she said. “It is an honor.”