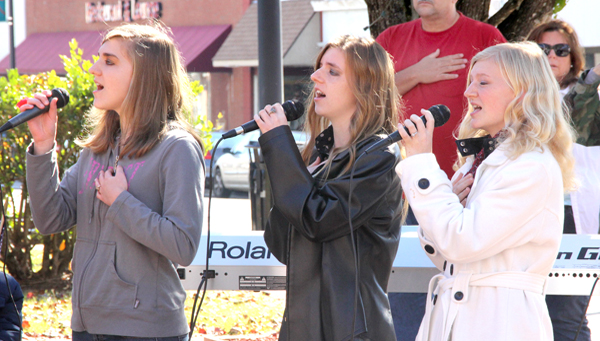 The Eyes of Emiline - from left, Emily, Jessica and Amanda King - perform the National Anthem during the Veterans’ Day service held Nov. 10 at No Man’s Land Park in downtown Ahoskie. Staff Photo by Cal Bryant

RICH SQUARE – In his 40-plus years of making music, Spook Joyner has logged tens of thousands of miles from his home base in Nash County searching for the next “big thing.”

He may have found it in three young, but powerful voices that call Rich Square as home.

The King sisters – Jessica (18), Amanda (16) and Emily (14) – are better known here in the Roanoke-Chowan area as “Captured Hearts.” Jessica began singing as a kindergartener at Rich Square-Creecy Elementary School. When Amanda was three she joined her sister on stage at the same school. At the age of six, Emily joined the group, and the trio was born. Over the past eight years the sisters have performed throughout eastern North Carolina and southside Virginia at various churches, festivals, and organizational events.

While the sisters readily admit that neither fame nor fortune fits into their equation for success, they do realize the road to stardom is paved with making the right decisions. The initial step in that process is to associate themselves with a strong ally, one with all the right friends in all the right places.

Make me believe it

With 45 years of experience under his belt, Joyner knows how to spot talent. He has worked the Nashville (Tennessee) scene. A talented musician in his own right, Joyner has performed on stage with the likes of Vince Gill, Kathy Mattea, Steve Warner, and Vern Gosdin. He has appeared on Ralph Emory’s Nashville Now show. As a music producer, Joyner has worked the famed music clubs in Myrtle Beach and currently owns and operates the Rudy Theatre in Selma, home of the famous American Music Jubilee. He has a recording studio at the theatre, as well as at his home in the Nash County community of Spring Hope.

“The girls’ grandparents had come down and seen the show at the Rudy. The granddad called me later and said he had three girls that sing like angels,” said Joyner, referencing the initial contact he had with the family of the King sisters.

“I told him, sure you do…..everyone brags on their family members, especially if they are musically inclined,” Joyner continued. “He talked me into hearing ‘em. They came to my studio and sang; I heard the harmony; I heard the potential. They have a natural gift that’s hard to find in my book. I’ve seen a lot of talent, but natural family harmonies are something I’ve always been drawn to. That sound is hard to beat. They’ve got it and I wanted to build on that.”

Joyner’s initial task was identifying the lead singer of the sibling trio.

“We tried some different things,” he said. “Amanda has shown to this point to have the strongest lead vocal and the other two are great at harmony.

“We’re trying to sell them as a vocal group,” he added. “I’m the one that said the Captured Hearts thing is more of a local, gospel name. I want to introduce them on a national level in Country Music. I’ve got some friends of mine in Nashville, Tennessee to send over some songs. We went through 50 or 60 songs and found 10 that fit the girls. We flew some guys, musicians, from Nashville to my studio in Spring Hope and recorded the CD.”

Joyner said he’s spoken to two record companies about the sisters, and the CD – entitled “Perfect” – and both have expressed an interest.

“They’re saying I need to develop the girls and that’s my goal,” Joyner said. “The first thing we tinkered with was a name change, Eyes of Emiline….that sounds more national oriented; Nashville, so to speak.”

When Joyner wraps up the Christmas season at the Rudy Theatre, where the sisters will perform this year (Dec. 7 and Dec. 13) as a fill-in act for one of his regulars, he wants put together a group and get the girls, “out there with their new name and new sound,” he said.

“I’ve talked with (Country Music star) Zac Brown and he shared some great advice,” Joyner noted. “Zac and his band already had a huge following before he cut his first record deal. The record industry in Nashville has changed since the 70’s. Zac said they were more interested now in groups that had an existing fan base. What we’re trying to do is get North Carolina to rally around these girls because they’ve got what it takes to move up. I believe that with all my heart.”

Perfect is a moving target

Currently, music lovers in the local area know the girls as a gospel group. Joyner stressed that genre of music has provided a solid foundation for numerous musical groups and soloists, but those same artists understand that to appeal to a broader audience they must undergo a transformation.

“We have to change their gospel sound to a Nashville sound and get their songs on the radio,” Joyner stressed. “It’s different for what they were as Captured Hearts. They’ve got what it takes, but their biggest ally is that they are very grounded to be so young. They’ve got their heads on straight. They’ve got good parents; they’ve got the time and the desire to develop their music.”

As any good music producer would do, Joyner had to test the waters…. dig deep inside the heads of these young girls. Do they really have what it takes? Can they handle the pressure?

“I felt I was asking a lot of three teenage girls who had perhaps never fell in love, never had their heart broken,” he said. “How can I get them to feel these songs, sing these songs and live this life? All of them have convinced me they have a true passion for music. They feel this is something they want to do, have to do; not something they’re being forced to do.”

Joyner also had to level with the parents – Adam and Julie King.

“I had a long conversation with the parents and it didn’t take me but a second to figure out that they’re in this for their girls, not for themselves,” he said. “They’re allowing their daughters to become what they want to be; not what mom and dad want them to be. I’ve told the girls that the first time I see them with their nose up in the air, I’m walking. They’ve got to keep it grounded; they’ve got to keep it real.”

What’s “real” for the moment is their first Country Music CD, produced and recorded at Joyner’s studio. The 10-song CD is, pardon the pun, “perfect” for Amanda’s angelic lead vocal and the powerful harmonies of Jessica and Emily. The latter’s nickname of Emiline, as used by her grandmother, compliments the entire musical package as it serves as a reminder to their roots, those grounded in love of family.

“I’m so appreciative of what he (Joyner) is doing for us and I give God all the credit,” said Jessica. “We’ve been given a chance to move forward from the local gospel scene. We’ve got a chance to reach a new and bigger audience. It’s not about fame or fortune; it’s about showing others what we’re all about. I feel we can touch people all over the world through our music. Music is our passion.

“When I was younger I was a lot more nervous performing than I am today,” she added. “Now when we perform, it’s for the love of the music and the love of those listening. I kind’a get sad when it’s over and have to sit down.”

“We all talk about it amongst ourselves at home how Spook has influenced us, helped us develop,” Amanda stated. “We feel stronger mentally about our future in music. We’re appreciative of everything being done to advance our career.”

“I want to take this as far as it will go. I know there are things we still need to work on and grow into as we progress our music careers. We are thankful for what Spook has done thus far to develop us,” Emily noted.

Jessica added, “We hope to cross over to other genres of music, but it’s country music that is the most appealing because it’s so simple, one where you can tell a story and we want our music to mean something to people, we want to connect with people and make ‘em realize we’re real.”

The more he talks about these three sisters, the more Joyner realizes what he has discovered.

“These girls can sing the old country if they wanted to, they can sing pop, new country,” he said. “We had to start somewhere and we started with the new Nashville sound….the rock and roll beat. They have their own sound and that’s what you have to have in this line of work. When you cut the radio on and heard a song you immediately know who’s singing it.

“The thing that’s going to sell these girls is their pure harmony. They’re working hard; they’ve progressed further as singers in the last year than they did in the five years before that because they now have someone who is pushing them to reach beyond their very best. They’re digging in for the long haul and I’m along for the ride. I hope the country music fans out there will join me and these girls. You won’t be disappointed,” Joyner concluded.

For more information on the sisters or to purchase a CD, visit www.eyesofemiline.com