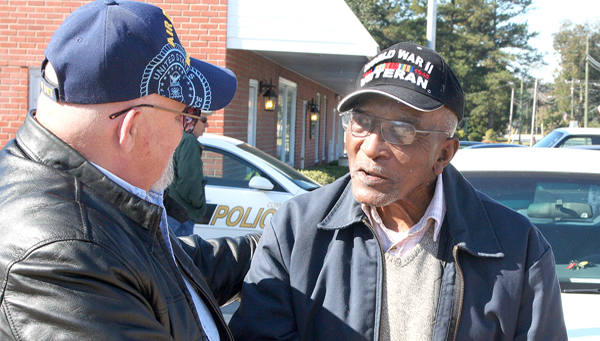 CONWAY – A thank you to those who have served their country can go a long way, even if it’s not Veterans Day.

On Saturday, Conway held a Veterans Day ceremony at the town’s Veterans Park. The ceremony featured music, a wreath laying and the crowd heard from Conway native Colonel Kenneth Wayne Woodard of Arlington, Va., who is retired from the United States Army.

Mayor Brian Bolton greeted those in attendance and noted the recent election.

“We weren’t all voting for the same person, but we had a winner and our military—it doesn’t matter who wins—they always stand behind our president,” he said. “I think we can learn from that example.”

Bolton noted a recent trip to Atlanta in which he saw the friendly exchanges between military personnel and civilians at the airport.

“There was a time in our history when that wasn’t going on and I think we’ve turned the tides on that and that’s something to be proud of,” he said. “So when you do run across a veteran—take a second, shake their hand and tell them ‘thank you for what you do’.”

Bolton introduced Woodard, who in 1971 joined the Army after graduating from UNC-Chapel Hill. He trained in the infantry and graduated from the US Army Drill Sergeant Academy.

In 1991, Woodard left private practice and returned back to active duty in the US Army. Following the fall of the Soviet Union in 1989, he completed four NATO missions to the former Soviet Union satellite country of Moldova, assisting them in their formation of democracy.

During his 38 years in the service, Woodard received many honors and awards, highlighted by the award of a Legion of Merit and two Presidential Citations.

Woodard also gave the history of Veterans Day, which honors those that have served in the nation’s armed service. The holiday began in 1918 as Armistice Day on the “11th hour of the 11th day of the 11th month” when the Armistice was signed officially ending World War I.  In 1954, Armistice Day became Veterans Day.

“The purpose of today is to profoundly thank all of those people for putting their lives on the line for all of us and for protecting us, for protecting our country and for preserving our American way of life and our freedom,” Woodard said.

Woodard continued by saying he never understood the concept of freedom until 1989 when he served on a mission to Moldova and saw the effects of Communism. Religion, education and language were just a few aspects of everyday life that was stifled.

“I had a chance to be there when they had their independence, and all of the sudden it hit me like a ton of bricks what this freedom that we talk about really meant,” he said.

Woodard recognized Conway’s living veterans as well as active-duty members, military families and those from the town’s past that served in wars dating back to Revolutionary War.

Woodard concluded by encouraging people to support military personnel with their “action and deeds” by sending letters, cards, care packages, give a veteran a job, buy a brick at Conway’s Veterans Park and volunteering to help out at local Veterans Day and Memorial Day ceremonies.

“Today we give thanks that were in a country where we have people who have been vigilant to protect us, and to protect our country and to protect our way of life,” he said. “They have done so willingly and courageously, and in Army terms, they have stood the watch.”