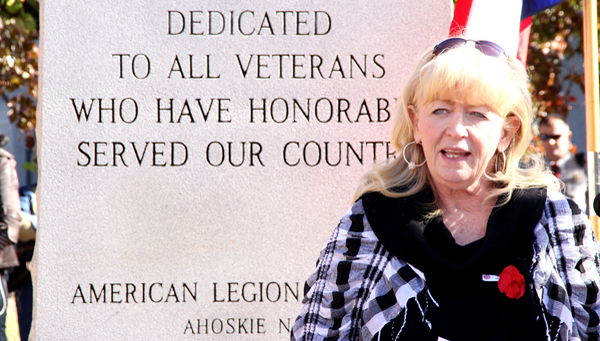 AHOSKIE – No matter the age, the shade of skin tone or political affiliation, when all the layers are peeled back is where you’ll discover a common thread.

The collective heartbeat of true Americans was heard here Saturday morning. Under the bright sunshine of a cloudless day, the mood was of a patriotic nature as hundreds gathered to witness a Veterans Day parade down Main Street followed by an 11 a.m. ceremony at No Man’s Land Park.

The events, both staged by American Legion Post 102, featured local groups, organizations and bands for the parade as well as former Ahoskie Mayor Linda Blackburn as the keynote speaker during the program.

Additionally, Post 102 paid tribute to the veterans of the Korean War (1950-53). Six local men who fought in that war were on hand Saturday to receive special recognition.

The Post also honored the memory of one of their own, former Commander Rosbon D.B. Whedbee, a Vietnam veteran who died Sept. 28.

North Carolina Senator Ed Jones, who served as the parade’s Grand Marshall, said he was honored to be among brave men and women who put their lives on the line in order for current day Americans to enjoy the freedom to assemble as they did Saturday.

“Today is a day we never want to forget, where he came from to get here and how we got here,” Jones said. “It’s so important to maintain the freedom of this country. It’s so important to remember those military veterans, past and present, who go off to war to fight.”

While she never saw a minute on a field of battle, Blackburn said she was an “Army brat” – the daughter of a World War II veteran who served in the 513th Parachute Infantry, assigned to the 17th Airborne Division.

“My dad, like all veterans I know, served this country with pride and without any reservation,” Blackburn noted. “He did not often talk about his days on active duty, or the war, but when he did recount a story I can recall wanting to know all about it. I was amazed to hear what he went through.

“When I would ask foolish, childish questions, his answers left me with something that I have since carried in my heart as he talked about loving this country,” she continued. “I have no doubt today about where or from whom the love I have for this country came from. My father was proud to be an American and enjoyed the freedoms that come with being an American. It was because of him and others who went off to fight in wars that allow us to live in freedom today.”

Blackburn added that her father also taught another valuable lesson in life – that of giving something back to your community, state and nation.

“Perhaps that’s why I chose to become a nurse, a social worker….I’m in a helping profession and it’s no doubt where that passion began,” she stated. “Then, when I ran for mayor, I remember what my dad told me. He said people would be giving me their vote, that’s their gift and the reason they have that gift is because of people who went off to war to defend this country so we have the right to vote.”

When his military career came to an end, Blackburn noted that her father’s passion for his fellow man still burned bright. He volunteered to serve his community and his church. He still visited with his military comrades, attending annual reunions of the 513th Infantry until he died on the day before Thanksgiving, 2005.

“I’ve attended those reunions with my father and mother and you can feel the pride among those men, even long after their military careers were over,” she recalled. “My father was my hero; military veterans who teach us daily what true honor and sacrifice are all about are my heroes. I love you as you have loved and respected this country. We own you our gratitude and our thanks and we need to do all we can to support causes that give back to the brave men and women who have honorably served this great nation.”

Willie Watford, Post 102 Commander, presided over the program. Comments, to include the invocation and benediction, were offered by the Rev. William Reid. Roger Smith added a bit of history by briefly telling the story of his brothers, Graham Smith and Reginald Vincent Smith, who were part of the famed Tuskegee Airmen.

“Captured Hearts” – a musical trio of young ladies – performed the National Anthem as well as offering a series of patriotic songs.

Bertie DSS promotes from within