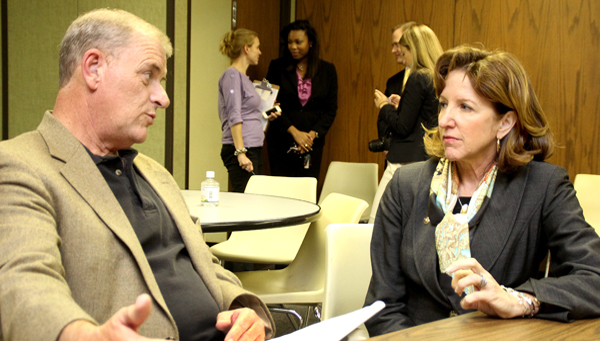 WINTON – As a nation mends in the aftermath of perhaps the most contentious national election cycle in modern history, U.S. Senator Kay Hagan assured all within earshot here Thursday afternoon that American democracy still works.

Visiting Hertford County as part of her “Conversations with Kay” tour, the North Carolina representative to the United States Senate discussed a wide range of topics during her 75-minute stopover in Winton. There she was greeted by local citizens as well as county officials.

Hagan also visited Northampton and Gates counties on Thursday as part of her “tour.” She was scheduled to visit Bertie County on Friday.

At the outset of her stop in Winton, Hagan quickly focused on the issue of partisan politics.

“I go back to Washington on Monday and when we reconvene we have to do away with this partisan gridlock and actually start working really, really hard between then and the end of the year; we’ve got a lot to do,” she said. “I really hope we can avert the fiscal cliff; come Dec. 31 if we don’t take action that fiscal cliff is going hit, which would be the increase of the Bush tax cuts, the payroll tax holiday….you name it, there’s a lot of things in there.”

On the “good news” front, Hagan said there were 20 senators, 10 Democrats and 10 Republicans, that are sitting down together in an attempt to put together legislative language in the Simpson-Bowles Report under the Fiscal Commission.

“There are three things (in that effort), go big, go long and go smart,” she said. “Go big – we need $4 trillion in cuts; go long – every business I talk to say they need certainty, a road map, because they want to make long-range plans and they are in need of tax reform, doing away with a lot of the loopholes and the credits. When we do away with those loopholes and credits we can actually bring tax rates down. Go smart – we need resources, we need to invest in America…invest in education and infrastructure, to include roads, bridges, airports, trains, water and sewer and high speed broadband internet. If you have a small business and you want to be competitive you need access to broadband. That’s lacking in a lot of our rural areas and we need to correct that because small businesses are the economic engines that drive America.”

“The Farm Bill, we passed it in the Senate, but the House (of Representatives) has not taken it up,” she stressed. “We need to get the House to the table and get the Farm Bill done.”

Hagan also took a few minutes to speak with the Roanoke-Chowan News-Herald. The biggest topic to address is the ill perception shared by the majority of Americans that their elected leaders in Washington are failing them by refusing to reach compromise on many important issues.

“There was a period of time on the floor of the Senate where the minority leader, Mitch McConnell (R-Kentucky), said it was his goal that President Obama be a one-term president,” Hagan said. “The way the rules of the Senate are, you can slow things down, delay them with a filibuster. We had a bunch of judges we wanted to get confirmed – it was met with a filibuster. It took us a week just to get one judge confirmed. Those delay, delay, delay tactics prevents us from getting on with the agenda, tackling the tough issues we all face as Americans.”

Hagan pointed to another example of the Congressional system slowing to a snail’s pace was a recent push to pass a Veterans Administration Jobs Bill, one that would dedicate $1 billion to get military veterans back to work.

“Think about the billions we’ve spent on these wars and we couldn’t even get a motion to proceed with this important piece of legislation because of a filibuster,” Hagan stressed. “That’s terrible, that’s not good government. The public needs to understand just what’s going on and the press needs to do a better job of saying what’s happening so the public can understand exactly what is going on.”

She again called for all elected officials on Capitol Hill to steer clear of partisan gridlock.

“The people have spoken and they said they’re tired of this, they want us to work together, to sit down at the table and negotiate, make a decision and quit the delays,” Hagan stated. “They’re some tough votes on some tough issues coming up…the deficit, job creation, education, investments in resources/infrastructure, etc….and I believe we’re going to do whatever it takes to reach a compromise, even if it takes all night. We’ve got to show all Americans that this system of democracy still works.”

With the assistance of her staff present at Tuesday’s meeting – to include Joyce Mitchell, Jennifer Johnson and Tyler Packard – Hagan and her team visited with local citizens seated at several tables to hear their thoughts and concerns. Those citizens and local officials addressed topics such as USDA loans, community college funding, healthcare, jobs and job training, economic development, IRS and Veterans Administration issues.

At the local government level, Hertford County Manager Loria Williams said she aired her concerns with Hagan over the burden placed on small counties and municipalities attempting to keep their financial heads above water while operating water and sewer infrastructure.

“The criteria and structure that the USDA has in place now is more about loans vs. grants,” Williams said. “These small counties and towns, many experiencing a decline in population, are struggling to pay the loans back because the number of those using this needed infrastructure is declining. It’s at a point now where the USDA will not fund these projects because they’re not feasible on their end. Something needs to be done to address the USDA’s formula, perhaps changing it for smaller areas such as ours. It’s either that or the USDA will need to look at putting in incentive money for regional water/sewer systems. You can apply for more grant funding by combining these smaller systems. We may not want to do that, but it would be in our best interests in the long run.”

“Think about the future of public health, especially addressing the issues of obesity and heart disease,” Madson said.

“I agree, we’ve got to do a better job of educating people on healthy living, on nutrition,” Hagan said. “I truly believe we’ve reached a point in America where more people are dying from overeating than malnutrition.”