Shields named Principal of the Year 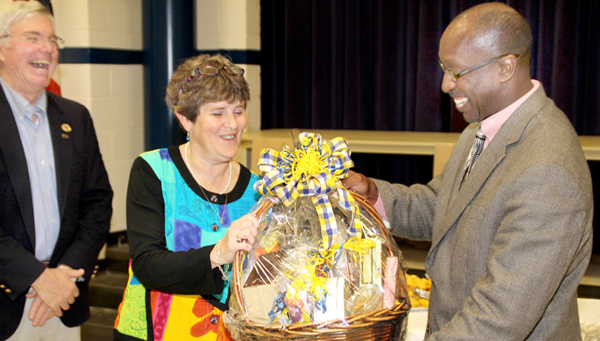 At a reception held in her honor here Tuesday afternoon, Julie Shields was formally introduced to the public as the 2012-13 Principal of the Year for Hertford County Public Schools. She has served as principal of Bearfield Primary School since September of 2002.

“I guess you could say this is a late present for me,” said Shields, noting her Sept. 28 birthday. “It’s a great present and I humbly thank my peers for this honor.”

Shields is a fixture in the principal’s office at Bearfield. She initially served as an assistant to principal Michael Bracy (2001-02) and then was named principal in February of 2003, following a four-month stint as the school’s interim lead administrator.

“Julie is a hard working woman; her work ethic and great attitude makes Julie a great role model not only for the students to pattern themselves after, but the staff there as well. She is so deserving of this honor,” stated HCPS Superintendent Dr. Michael Perry.

“You are the reason for all of the success here,” said Shields, pointing to a group of Bearfield teachers and staff members seated in the school’s cafeteria. “I represent you and this award is representative of your outstanding work. Success is based on the people you surround yourself with. I have an awesome staff at Bearfield. I have awesome support at home with my family, especially considering the hours I have to work. David (her husband) totally respects what I do. Working in education takes a lot of time and dedication.”

At the local level, Perry said that Shields, due to this accolade, will participate in a program at the Chowan University School of Education as well as playing a significant role in next year’s annual HCPS convocation, held in August, an event that serves as a rally to start a new school year.

At the outset of the application process for HCPS Principal of the Year, Shields said she was apprehensive about placing her name into consideration.

“I’m not in this business for any type of accolades,” she noted. “But my staff here kept pushing me to enter and I finally gave in. I wound up spending many, many nights at home doing the necessary paperwork. I interviewed at the Central Office in the middle of one week and the announcement of the winner was made on the Monday of the following week. It should go without saying that I was shocked at the outcome. I was completely blown away.”

One of the questions asked during the interview process concerned Shields’ future.

“They asked when did I plan to retire,” she said. “My answer was no fixed date, that will come when I cease to make a difference, that’s when I’ll stop.

“These children are the easiest part of my life,” she continued. “What we do for them, as a staff, goes far beyond just the required educational aspect. Personally I’ve witnessed the needs of our children increase over the years. They’re more needy now.”

As an example of meeting those growing needs, Shields said her church (St. Thomas Episcopal in Ahoskie) allows her to select 12 families each school year, those with multiple students at Bearfield, to provide Thanksgiving, Christmas and Easter baskets.

“Bearfield is also a big supporter of the Ahoskie Food Pantry because that organization impacts so many families with students enrolled here,” she noted. “We have so many community partners that support us here at Bearfield, including a growing number of groups that provide school supplies for our students and for our classrooms. The needs seem to be greater, but we are receiving more from our community partners and that’s fantastic.”

Her background in education includes 20 years in the classroom, beginning in 1980 as a teacher at both Ahoskie and Murfreesboro middle schools before an 18-year teaching career at what was then known as Ahoskie Graded School (now Ahoskie Elementary School).

“I started at Ahoskie Graded School as a teacher of a combined first and second grade class,” she recalled.

While she couldn’t recall exactly what year, Shields is no stranger to earning accolades from her peers. She was named as the district’s Teacher of the Year while at Ahoskie Graded School and is a former Principal of the Year recipient earlier in her administrative career at Bearfield.