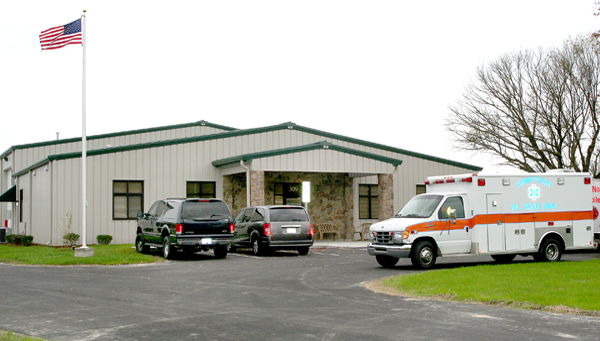 Members of the Conway-Severn Rescue Squad hosted an open house on Saturday, allowing the public to take a look at the new facility located in Conway. Staff Photo by Amanda VanDerBroek

CONWAY – More than three decades after its start, Conway-Severn Rescue Squad finally has a home of its own.

On Saturday, CSRS open the doors of its new station to the community it has served for 35 years. Rescue Squad members, family, friends and community leaders gathered to tour the new station, listen to guest speakers and take part in a donation meal.

The $751,000 project was funded through a United States Department of Agriculture (USDA) Rural Development by way of the American Recovery and Reinvestment Act with a loan of $551,000 and grant of 200,000. In addition, CSRS also received a $25,000 grant from the Department of Insurance Office of the State Fire Marshal.

The 7,000 square foot station, designed by James Miller and Associates of Roanoke Rapids and constructed by Turn-Key Contractors of Rocky Mount, includes a conference/training room, staff break room/kitchen, office space and dormitories. There are also three drive-through bays large enough to fit all of the squad’s equipment, which includes five ambulances, a crash truck, an SUV and two boats.

The property the new facility sits on is also large enough to accommodate the landing of Vidant EastCare helicopter for emergencies.

CSRS Captain Chris Buffaloe described the new facility as a “tremendous and historical moment for our squad family.”

“It’s been a long time coming and we have a lot to offer,” Buffaloe said.

Buffaloe said the squad had its beginnings in 1977 when a group of 22 local citizens enrolled in an EMT course.

“The course was held in the Community Building in Severn and all 22 members passed the EMT test,” he said.

The squad at the time was housed in one of the three bays of the Conway Fire Department.

“In 2009, a need for emergency transport developed rapidly in our area, outside agencies were coming into our community and servicing our family and friends,” he said. “Our squad decided we should provide such a service and so we started a very successful transport division of our rescue squad and that is beginning to be the bread and butter of our existence.”

With the growth of the squad again, the plans for the new building began in 2010 with USDA Rural Development.

“This process has been very long and toilsome and I feel like I’m 180 years old now, but the support of our members and our citizens, today we have something to be proud of,” Buffaloe said. “Today marks the beginning of a new adventure and a new vision on the horizon.”

Conway Mayor Brian Bolton said he was impressed by the new facility the first time he walked through it last week.

“This is just proof that organizations, such as this, need young people in their leadership,” he said. “It’s very important to the town of Conway and Northampton County to have a rescue squad that’s exactly as this one is.”

“These are the people that don’t really care who you are, where you’re from, what color you are—they know you’re in need and they’re going to help you, and we are very grateful for that,” he said. “You should be very proud of that and this facility is something that will help you shine in the community. We thank you.”

Bolton added the town has committed some funds to helping CSRS with the utilities in order to take some burden off of the squad.

Barrett said, as the fire chief, the two agencies have a relationship that is “very meaningful and very important.”

“Over the years we have needed them in certain situations and they have always been there for us,” he said.

Barrett said with CSRS moving from the building it leaves a void.

“We won’t see them everyday at our station,” he said. “For that interaction, I guess we’ll just have to come up here and (sit) a little while.”

Barrett said all agencies in the county work very closely to provide emergency services to citizens.

“I want to thank each and everyone of those people,” he said. “The county realizes the importance of EMS services and we have expanded that and we hope you appreciate that.”

“This is a great day for this community because working together works and nothing happens over night,” he said. “You just never give up.”

“You really don’t think about the training they have to do with continuing education, the time they take away from their families and the dedication,” he said.

Tobias Fullwood with USDA Rural Development noted the purpose of the agency is to assist with the needs in rural America, including businesses, towns, fire departments and rescue squads.

He presented a plaque of appreciation from USDA Rural Development to Buffaloe and CSRS.

The Rev. Willie McLawhorn of Conway Baptist Church and the Rev. Melvin Roberts of Second Baptist Church in Potecasi provided prayer for the open house ceremony.