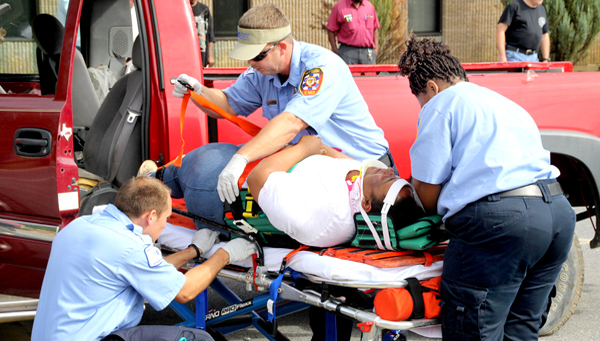 AHOSKIE – It was only a re-enactment, but the point of making a deadly choice was hammered home.

Last week, the Emergency Services Training program at Roanoke-Chowan Community College staged a single vehicle accident scene in front of the Jernigan Building. There, a pick-up truck (a wreck donated for use by Ahoskie Body Shop) carrying a driver and two passengers sat motionless in the main driveway. Several Hertford County EMS units, with sirens blaring, rushed to the scene, as did North Carolina Highway Patrol.

On the sidewalk lay one victim, ejected from the truck. An EMS worker checked for vital signs and, finding none, pulled a sheet over the deceased passenger.

Another passenger remained inside the truck. The extent of her injuries required the expert training of an EMS crew, who carefully isolated her extremities, loaded the victim on a backboard and whisked her away to the hospital.

Meanwhile, the driver was seemingly dazed and confused as she angrily paced back and forth just a few feet from the vehicle. As she approached the vehicle to check on the condition of the living victim, the driver was met by the EMS workers on the scene. She became combative, drawing the immediate attention of the Highway Patrol Trooper. He was forced to handcuff the driver, placing her under arrest.

“Drills of this type are necessary in order for these different levels of emergency responders to interact their professional services,” said Fred Curley, director of the Emergency Services Training program, which is under the auspices of Dean Myra Poole.

“Many think that driving while impaired concerns only alcohol, but that’s not the case,” Curley added. “So many things will cause drivers of motor vehicles to be under the influence, it could be prescription medicine, over-the-counter medication, to include cold and cough medicine. Driving skills can also become impaired from an emotional standpoint…the driver may be upset or mad. They may also find themselves making a bad choice by exceeding a safe speed or by driving in a careless or reckless manner.”

“Being zipped up inside a body bag was no joke,” said RCCC student Tonja Williams who played the role of the deceased. “That makes you really think about things….it’s a place you don’t want to be and this program drove home a good point about driving while impaired.”

Playing the role of the driver was Kim Parker while Tanisha Jenkins was the accident victim inside the vehicle. Both are RCCC Nursing students.

In a debriefing session after the re-enactment, Broglin said he wanted those RCCC students and staff witnessing the accident scene that the time element of assisting the victims was much shorter than what is typical at a real mishap.

“In a real life accident we have to take our time in an effort to ensure that the victim’s injuries are properly attended to,” Broglin said. “In some cases that may take hours, especially when using extraction tools to safely reach and remove the victim.”

Broglin also addressed another element not witnessed at the re-enactment.

“Accident scenes often required the complete closure of both lanes of traffic in order to safely maneuver the incoming and outgoing emergency response vehicles as well as to afford the emergency responders at the scene a level of safety while they work,” he said. “Other drivers become inpatient, but all we’re asking is for their patience while we’re doing our job.”

“Troopers have to call out the Sergeant on call; he has to review what we’re doing with our investigation of a fatal accident,” said Copeland. “While we make every attempt to ask questions at the scene of those involved in the accident, that sometimes is not the case due to the extent of injuries or even the emotional distress of a driver or passenger due to having a family member or friend that unfortunately lost their life. That information can be obtained later.”

Copeland also explained why Troopers use paint to mark the position of the vehicle or vehicles in an accident as well as where victims were positioned.

“In order to expedite the effort of having victims go to the hospital and because we want to clear the road of the wrecked vehicles as quickly as possible, which means wreckers moving the vehicles, we have to mark those positions in order to come back later and know exactly where everything was,” he said. “Sometimes, in extreme emergencies, an accident victim has been moved by EMS and transported to a medical facility before a Trooper arrives. Then in order to re-create the scene we’ll have to interview EMS to see where that person was located prior to being moved.”

For more information about those programs, contact Kelly Wiggins at 252-862-1266.