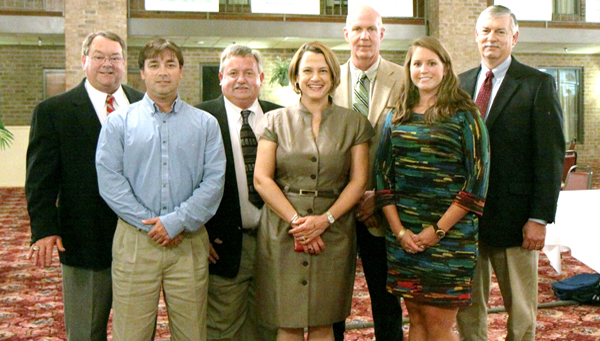 AHOSKIE – As the world gravitates more and more towards independence from fossil fuels, a small part of that future energy equation is right here in Ahoskie.

In late 2010, Enviva LP announced the start-up of a wood pellet manufacturing facility at the old Georgia-Pacific sawmill located on NC 561 East. This new company, established in 2004 and headquartered just outside of Washington, DC, had a vision of helping to meet the world’s growing appetite for sustainable sources of energy. After a few short years of research and development, Enviva began producing wood pellets for energy applications in 2008. Those pellets are proving as a popular substitute for coal at energy producing plants in Europe.

The future is bright for Enviva, and that fact became clearer here last week when Elizabeth “Liz” Woodworth served as the keynote speaker at the 69th annual banquet hosted by the Ahoskie Chamber of Commerce. The event was held at the Ahoskie Inn.

Woodworth, the Director of Marketing, Communications and Sustainability at Enviva LP, spoke about the new wave of sustainable energy.

“That type of energy is here to stay and Enviva is here in Ahoskie to stay,” she said. “I’m honored to work with Enviva on a daily basis, proud to work with a company so dedicated to the safety of its employees and so excited over manufacturing a sustainable energy product.”

She explained the meaning of biomass to the large audience, saying it is defined as plant material and animal waste transformed into a fuel product.

“What we consider as biomass is wood. Those pellets are incredible. We use residue from sawmills, chips from other facilities, tree tops, limbs and round (forested) logs to produce our product,” Woodworth explained.

In the late 1990’s she said many European nations jointly signed an agreement to help stop the advance of greenhouse gases in the atmosphere. As a result, the European Union promoted the Renewable Energy Directive. By 2020, the Union wants to see 20 percent of their energy coming from renewable products such as wood pellets; a 20 percent improvement in automotive efficiency; and a 20 percent decrease in greenhouse gases.

“As a result, each nation has to formulate a renewable energy plan and biomass was a part of that,” she said. “That plan especially applied to countries that used coal-fired energy plants.”

The nice thing about wood pellets, Woodworth said, was they can be used as a substitute for coal.

“The beauty of that is those coal-fired energy plants did not have to retrofit their facilities; wood pellets could be used just like coal,” she noted. “As a result of that, demand for wood pellets is skyrocketing. That demand is projected at 15 million tons a year by 2020 and Enviva is just a small part of that.”

Woodworth added that the European nations cannot meet their own demands for wood.

“You’re blessed here in North Carolina with an abundance of forests, about 18 million acres,” she observed. “In the United Kingdom, they have about 6 million acres. The United States has about 750 million acres, about 200 million of that is in the southeastern states. So that gives us an opportunity to supply some of Europe’s energy needs.”

Woodworth said many ask why does Enviva ship the majority of their product overseas….why not use it in the United States if it’s such a great source of fuel.

“If the United States decided to replace some of its coal usage with woody biomass, the potential is huge,” she said. “But it would not compete with the European demand. For the most part, utility companies here in the U.S. source their needs locally. For example, we have a supply agreement with Dominion Power. Also in terms of the U.S. market, it varies state by state. Some states have mandatory renewable energy policies, some have voluntary policies and some states have none at all. It’s a very fragmented market in the U.S.”

On the residential side, Woodworth said wood pellets are an incredible way to heat a home. Some schools are turning to biomass products as a heating source.

“The market may turn here in the U.S., but that may come through a different door,” she stressed.

For now, Enviva is banking its future on the European market, one that Woodworth said is estimated to grow, in worth, as high as 10 billion dollars by 2020.

“I’m very proud to say that Ahoskie and Hertford County are a part of this expanding renewable energy market, one that’s not going to go away,” she boasted. “We’re very excited about the potential and we’re very excited to be here in Ahoskie.”

Enviva’s success story, one that has taken only five years to write, is based on simple and basic principles, Woodworth said….expanding into existing infrastructure and tapping into an extremely robust wood basket and forest industry.

“We’ve built great relationships with the loggers, the landowners and the pellet manufacturing equipment is already established through other means,” she noted. “We have a great relationship with our trucking firm and are now looking to expand that by rail. We use what already exists. We’re in a great place to make wood pellets. We’re close to the forests and we’re close to the (shipping) ports, and that’s growing our business quickly.”

She continued, “Our flagship facility and the one we’re very proud of is right here in Ahoskie. We acquired the land from the old Georgia Pacific sawmill in December of 2010 and made our first pellet here 11 months later. We rebuilt that facility from the ground up.”

Woodworth said the Ahoskie facility, capable of producing 350,000 metric tons of pellets on an annual basis, is so successful that Enviva is copying that design and constructing two “sister” mills, one in Northampton County and the other near Franklin, VA. Those two facilities will combine to produce one million metric tons of pellets by the end of 2013. Those pellets, along with the ones manufactured in Ahoskie, are shipped out of the port in Chesapeake, VA.

The Ahoskie mill has also produced full-time jobs, 70 to be exact, with most of those employees living within 30 miles of the facility. The mill operates 24 hours a day, seven days a week.

Woodworth said Enviva’s investment in the Ahoskie mill is $70 million. The ongoing annual purchases to keep the mill in production is approximately $40 million; most of that, she said, is locally sourced.

“We’ve found the businesses here locally are so good to keep our mill here operational that we’re using them as well at our mills in Mississippi,” Woodworth noted. “We’ve built some great relationships here, ones that will only get stronger in the future. This community has warmly welcomed us.”

“Safety, sustainability, and integrity….we follow those mantras each and every day,” she stressed. “Working with private landowners here in the South is a perfect match as they already understand the importance of sustainability – they know how to manage their forests, how to grow more trees today than yesterday and that fact keeps our company excited about the future.”

Dan Joyner, Executive Vice President of the Ahoskie Chamber, presided over the banquet.

James Eure, president of the Chamber’s Board of Directors, presented the Chamber Member of the Year Award to Classic Parties and Equipment Rentals (R.J. and Melanie Myers).

“The Chamber has been very important to me,” said Mr. Myers upon accepting the award. “I would encourage everyone to shop locally and support your local Chamber.”

“Thank you for this award and thank you to the community college here that gives me the opportunity to work with the local businesses, individuals and other organizations,” said Bales.

“It’s always great to be in Ahoskie,” he said. “You have put on a wonderful banquet here tonight. The Ahoskie Chamber does a great job in promoting this area, helping to attract new businesses, which brings economic investment to include jobs.”

Bunch talked of Ahoskie recent growth, to include Enviva and other businesses coming to the town.

“You guys are in for a treat with Enviva….they’re a great company to work with and their vision for the future of renewable energy products is second to none,” he said.

ELIZABETH CITY – And now it becomes a new battle. Their hopes of first place outright in the Central Intercollegiate... read more