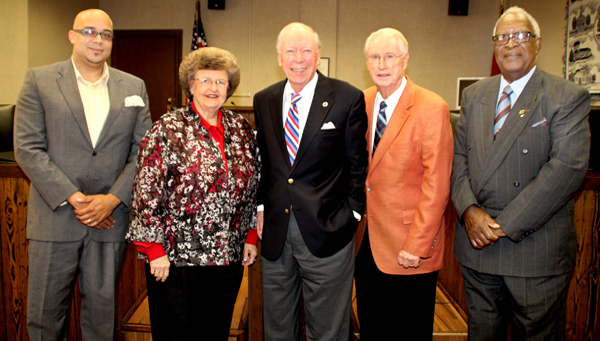 AHOSKIE – One veteran town official is leaving and another will take his place.

Tuesday morning, longtime Ahoskie Town Councilman O.S. “Buck” Suiter Jr. announced his resignation from that elected board after 25 years of service. That announcement came during the Council’s regularly scheduled monthly meeting where Suiter said his resignation would be effective at the close of the next Council meeting (Tuesday, Nov. 13).

Then, Suiter put a motion on the floor to nominate Linda Blackburn to fill the remainder of his current four-year term, which expires in November, 2013. That motion passed without objection of the five-member Council.

Blackburn served eight years (2003-11) as Ahoskie’s Mayor. She was defeated in the November, 2011 municipal election by current Mayor Brien Lassiter.

“During my time here I’ve had the pleasure to serve with six mayors, none that I found to be more dedicated and knowledgeable than Linda Blackburn,” said Suiter, who is currently the Mayor Pro Tem of the Council. “She knows everything we’ve got going on here and with that I would like to make a motion to nominate her to fill my unexpired term.”

As for her reaction to once again becoming a member of Ahoskie’s town government, Blackburn said she would be happy to serve.

“I’m thrilled to have this opportunity and humbled that Buck trusts my judgment to fill his seat,” Blackburn stated. “I’m following a man who has been a mainstay on this Council. Because of his banking background, Buck was the financial guy to turn to for advice. He was the Council’s go-to guy when it came to making budget decisions or making deals on loans. He brought so much to this Council and I feel it’s an enormous legacy to follow.”

She continued, “I love this town and I’m not going anywhere. It’s a wonderful place to be and I’m honored to have this chance to serve this wonderful town again.”

As far as to what led him to resign, Suiter said there were “a whole lot of reasons, but I guess the main one is that I feel that this is the right time. I’ve enjoyed my many years of service here and I’d like to thank the citizens for allowing me to serve them.”

Suiter said the town has made a lot of strides in improving its infrastructure over the years, and that fact is no more evident than the current-day projects.

“At the present time we’ve got a lot of things happening,” he stated. “Under Tony’s (Hammond, the Town Manager) leadership and the many outstanding department heads now in place, the future is certainly bright for Ahoskie. Even though I won’t be on the Council, Tony, I’ll be checking on the (town’s) fund balance every now and then.”

“I’m sure you will, Mr. Suiter,” Hammond replied with a chuckle. “I’ll keep you on the mailing list.”

Suiter’s colleagues on the Council seized the opportunity in a public setting at Tuesday’s meeting to offer personal sentiments on their professional relationships with the board’s elder statesman.

“It’s been a pleasure working with you, Buck,” said Councilman Maurice Vann. “I wish you the best and, as they say, with every ending there’s a new beginning. I hope you enjoy this new stage of your life.”

“We’ve got a good team here in Ahoskie, and for a long period of time that team included you, Buck Suiter. You’ll definitely be missed,” stated Councilman Malcolm Copeland.

“You be sure to do what you said you’ll do about keeping a check on that fund balance,” Councilwoman Elaine Myers said.

“I’ve enjoyed working with you for a number of years,” Councilman Winfred Hardy said. “I hope you enjoy yourself.”

“He always had a smile, always was concerned about how you were doing,” said Town Clerk Joleatha Chestnutt. “Mr. Suiter would make my day by stopping by my office on occasion just to see how I was doing, that meant a lot to me.”

Suiter first joined the Council in 1983, appointed to fill an unexpired term. He was elected to the same seat later that year and earned reelection through 1991 at which time he had to resign due to work-related commitments – traveling statewide through his position with what was then Centura Bank.

He was appointed back to the Council in 1994 to fill yet another unexpired term and has served continuously, through numerous elections, since that time.

When asked to share his best memories of being a Council member, Suiter didn’t hesitate to answer.

“What we have going on right now,” he stressed. “I give Tony a lot credit for moving Ahoskie forward. We went for so long – longer than I thought we should because of our conservative nature – and didn’t make any improvements to our town’s infrastructure, to include public buildings, the wastewater plant and our recreational facilities to name just a few. You know me, as a banker I don’t like all this debt, but these improvements were long overdue and Tony did his homework and guided us in a way where we can handle the debt service payments without compromising our traditionally strong financial health. This town is in good shape and its future is bright.”

Born in Northampton County, it was the banking business that brought Suiter to Ahoskie from Nash County. There he had previous municipal government experience as he served a four-year term on the Nashville Town Council.

“I fell in love with Ahoskie when I first moved here,” Suiter said. “I made a promise back then that regardless of what happened after I got here, I was going to retire here.”

He was originally employed with Planters National Bank until merger between Planters and Peoples Bank on Nov. 1, 1990 to form Centura. His job responsibilities included overseeing branch operations over a large part of North Carolina.