CONWAY – The town of Conway has reached out to the North Carolina Department of Transportation (NCDOT) about a ditch causing erosion problems and threatening the town’s sewer manways.

On Tuesday evening, Mayor Brian Bolton read a letter on behalf Town Commissioner Alan Harris regarding the ditch, which has eroded nearly five feet of Harris’s property and has caused issues for the town and local farmers as well.

According to Harris’s letter, the problem began when NCDOT replaced a culvert under US 158 on the eastern side of town in 2008.

“Our ditch has been eroding since the first rain after this project was finished,” the letter states.

Harris added the water flow has increased so much it has dug the ditch deeper and has undercut his property, causing erosion. He said after each heavy rain there are one to two-foot waterfalls in several places along the ditch. 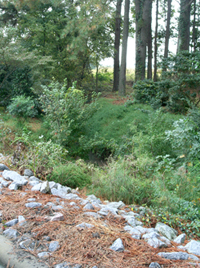 A mixture of pine straw and rock is used along the curb on US 158 in Conway to help control erosion as stormwater drains into the ditch below. Staff Photo by Amanda VanDerBroek

Harris said he has lost several plants and trees on his property that have slid into the ditch.

He added he has made many requests to meet DOT concerning the problem.

“I am told DOT will be glad to come meet with me,” Harris’s letter states. “It has been years and I am still waiting for someone to come. They claim to have come and looked at the problem, but I have never seen them.”

Harris concluded that there are three other culverts that were replaced in town during the same time and each are causing problems.

“I want you to put yourself into the position that this is your yard, you’re paying taxes on a set plot and it’s slowly going away and it wasn’t doing that before the culvert was replaced,” said Bolton.

Bolton said he has spoken to several DOT representatives and he understood there are engineers that design such projects, but the town needs help figuring the problem out.

“I don’t believe it’s anything done by the Town of Conway or by the citizen—something has occurred as a result of that culvert replacement and we need to understand what that is,” he said.

Bolton also noted along with the culvert problem and the fast water flow the town’s sewage manways are being threatened.

“If we wash those away we’re going to have major issues with the environment,” he said. “We’ve got to come to some agreement and work on this together.”

Jack Liverman, NCDOT engineer for Northampton County and Jerry Lindsey with the NCDOT Hydraulics Unit, who attended the meeting, responded to the town’s concerns.

Liverman said he has never received a call from Harris and requested a meeting with him at the site. Harris rebutted saying he had called Liverman.

After further discussion, Bolton questioned what could be causing the problem if it is not a design flaw in the engineering.

Liverman referred to Lindsey who had taken a look at the culvert.

“Basically the problem is that it’s on such a steep gradient that you’re going to have natural erosion out there,” Lindsey said.

He added before the culvert was replaced it was a double 42-inch pipe. Lindsey said the outlet of that pipe was “purged,” meaning it was several feet above the outlet of the streamhead on the downstream side.

The Corps of Engineers and DWQ now require any “purged” condition to be eliminated (lowering the gradient) when a pipe is replaced.

Lindsey noted that “purged” condition was probably eliminated at that site, but the amount of flow that comes through the pipe was not altered.

“It flows on through with the same discharge in that pipe as in the stream,” he said. “We’ve not changed the flow rate at all.”

Lindsey said the velocity of the stream is due to the gradient.

“What we should have done is when we put that (gradient) in we should have put a (gradient control structure) at the upstream side and we can go in and do that,” he said.

“The only solution there is to do a comprehensive stream restoration for the entire stream, and that is beyond the responsibility of the Division of Highways,” he said.

“I want to work together. I don’t think it’s something the entire bill should fall on the town or Mr. Harris,” Bolton said.

He added the town has been in touch with the landowners in the area about possibly building a retention pond and slowly releasing the water.

“We’re just looking for some kind of answer,” Bolton said. “What can we do to help this citizen and in doing so we’re hoping to improve what is going on downstream because all the way to Kirby Creek it’s washing out.”

Bolton said the town has some grant money for a feasibility study on the downstream side of it and they were willing to use those funds.

Liverman said the gradient control structures could be done at or near NCDOT right-of-way at pipe and that would require permission from environmental agencies.

Liverman said NCDOT’s contribution would probably be the gradient control structures and he had sought out funding options for the town, including Four Rivers RC&D.

“There’s a possibility there is a funding source there and this is an organization that does grants for this type of work,” he said. “(A representative) has agreed to come meet with us next week.”

Liverman said he has also spoken to Winn Bridgers, Assistant Division Maintenance Engineer for NCDOT’s Ahoskie office, and the town of Colerain has done similar work in the past few years. He added Colerain Mayor Bernie Baker may be another source Conway officials could speak to for solutions.

Liverman said he would be in touch with Conway officials by the end of next week.