AHOSKIE – One local father is defending the rights of his daughter over freedom of personal expression.

And he took to the sidewalk near the Hertford County High School property to display his message of individual rights. 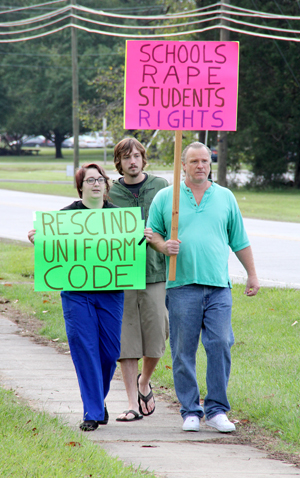 “I understand and agree that a policy is needed to outline what is proper for students to wear to school,” Ireland said, taking a brief break from his walking protest along First Street in front of the Ahoskie Cemetery. “At the same time you can’t step on the students’ constitutional rights and deny their freedom of expression. Myself and other parents are angered over this.”

“I tried to get the state to show me, or give me some documentation on this issue,” he added. “I have shown our school system other cases of where students’ rights have been upheld in a courtroom.”

Ireland said he was told by Perry that Hertford County Public Schools are following the guidelines on student dress code from the North Carolina General Assembly.

“I’ve been on that (General Assembly) web site and researched the statutes; I can’t find anything that gives these schools the right to do what they’re doing,” he insisted.

“Again, I support a dress code for students, especially one that prevents baggy clothing and prevents a female student’s breasts from hanging out, but the one here is a bit overboard,” he said. “They’re taking kids out of class at the high school and checking to make sure they have the same color of socks on. There are at least 20 students in violation almost every school day, according to what my daughter is telling me.”

Ireland’s daughter, a senior at Hertford County High School, is one of those being signaled out. As typical of many young adults in today’s society, Victoria Ireland has several piercings on her face, each accompanied by round silver jewelry. Thus far since the start of school in August she has been suspended twice for violating the policy.

“She was sitting in class doing her work and (school officials) came by and pulled her out,” Ireland said. “There was a time when we use to fight to try and keep kids in school and not skipping class, and now they’re kicking kids in class out of school just because of their appearance.”

Ireland said the clothing his daughter wore to school met all the regulations.

He said he has contacted the American Civil Liberties Union (ACLU) and heard back from them earlier this week.

“They just won a case in Johnston County for a female student with a piercing in her nose,” he stated. “There, the school system spent $15,000 defending itself and then dropped the case.”

Ireland made reference to another case involving the Gay & Lesbian community, saying they won a legal battle to display their rainbow colors and wear triangle wrist bands in support of their cause.

“I’m asking our school board how is my student not afforded the same rights,” Ireland said. “Even with her piercings she’s not being a distraction to anybody.”

He admitted that while the schools’ dress code policy prohibits face piercings, it does permit earrings.

“You can wear other jewelry, necklaces and such, as long as they’re not in excess, but no face piercings are allowed,” Victoria said.

“We all have individual personalities and it should be your right to express them,” he added. “The school is overstepping its bounds. This is the same dress code policy that the county put in place several years ago, but now the issues have changed. When you take a peaceful student out of class over some nick-picky thing, it pushes my button the wrong way.”

Meeks said that one female student came back to class to start the new school year in August with a tiny streak of her hair a different color than the rest.

“They kicked her out,” he said. “(The policy) states your hair has to be one natural color. They claimed hers was abnormal and distracting.”

“When you start getting into the personal stuff, that’s when the school has crossed the line,” Ireland stressed. “There was one girl I saw in the (HCHS) office with beautiful hair that she had braided and neatly pulled back. They told her she had to take all of that out of her hair.”

He continued, “All I’m asking (the school board) is to review and revise the dress code policy. I’m doing what I’m doing to protect my daughter’s rights, and the rights of the other students. I served in the military, but it wasn’t so I could come home and fight Communism. That’s exactly what I feel is going on here. My daughter isn’t disturbing anybody, all she’s trying to do is pass her courses to graduate. Her rights are being violated.”

Based on conversations he said he’s had with other parents, Ireland said he expects a large turnout at Monday’s (Sept. 24) scheduled meeting of the School Board in Winton.

“They are wanting to voice their concerns over the same issues, Ireland said, adding there are at least three petitions circulating throughout the county in an effort for the school board to sit up and take notice of their concerns.

Ireland obtained permit from the Town of Ahoskie to conduct Thursday’s protest. He followed the letter of the permit by remaining off school property.

AHOSKIE – One local school likes its chances of collecting a share of one million dollars. Less than one week... read more