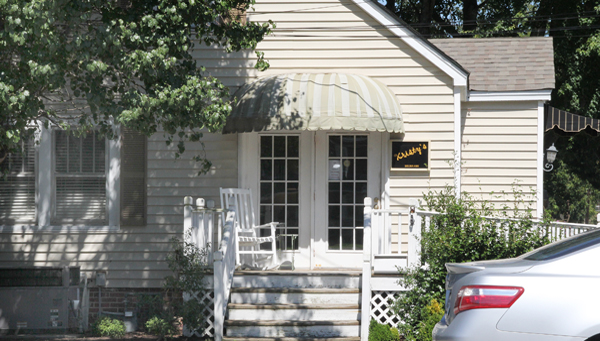 This business on West Street, one block off Main Street, was the latest to take advantage of the Town of Ahoskie’s Façade Grant Program.

Ahoskie’s Façade Grant Program has been in existence for approximately six years. Town Manager Tony Hammond told members of the Town Council at their Tuesday morning meeting that the grant has only been used a handful of times.

“We budget $12,000 annually for the program, but it’s used so infrequently that we wind up rolling that money back into the (budget’s) general fund at the end of each fiscal year,” Hammond explained to the Council.

Currently, if a Main Street property owner wishes to tap into those funds for aesthetic improvements to their storefront, they are required to obligate $5,000, of which the town will put up one-half ($2,500).

“I’m asking for the Council’s permission to double the town’s assistance to $5,000 for those property owners who will obligate $10,000 worth of improvements,” Hammond stated. “This will give them a bit more incentive to make significant improvements to their storefront. We’ll still wind-up paying one-half and the property owner the other half.”

Hammond called the investment made by both parties a “win-win situation.”

Hammond restated the principles on which the program was first built – to encourage well-designed improvements; restore significant architectural elements of the structure; and coordinate the important features of a commercial or office storefront into a more visually attractive package.

Councilwoman Elaine Myers asked Hammond if the town’s Beautification Committee had been informed of the requested change and if that group could be used to help spread the word to downtown business owners to take advantage of a 50-50 funding opportunity to improve their property.

“The Beautification Committee has not, to my knowledge, met for the past two years,” Hammond said.

Myers then asked Hammond to contact the chairperson of that committee and to encourage them to convene a meeting. She also suggested that the town needs to utilize the message box on the water bills (mailed to all property owners) to make them aware of the Façade Grant Program.

Upon fielding a question concerning the great number of downtown property owners living out of the area, Hammond agreed that there were many “absentee” owners. He said the town was looking into having a brochure printed on the Façade Grant Program which could be mailed to those property owners that live out of town and may not be aware of the program.

On a motion from Councilman Malcolm Copeland and a second from Myers, the Council unanimously approved Hammond’s request to double the town’s grant funding and the amended the guidelines of the program.

MERRY HILL – Fabulous 40. On a night when they saluted 40 years of Lawrence Academy football the Warriors went... read more