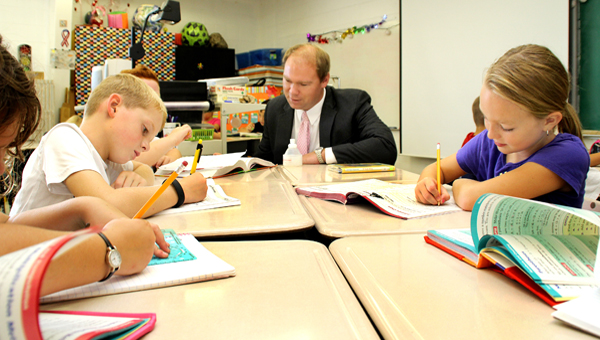 In the spring of 1990, Aycock – several feet shorter and 150 or so pounds lighter – exited Nancy Neil’s third grade class, bound for a bold new adventure north of the border in Richmond, VA where his father, former Ridgecroft Headmaster Dr. Tom Aycock, had accepted a similar job at Trinity Episcopal School.

Earlier this summer, Aycock, born and raised in Hertford County, was named as Ridgecroft’s new Headmaster, following the path his father took at the local independent school from 1978-90.

“It’s good to be here. It’s good to be back and it’s good to see so many familiar faces,” said the younger Aycock last week as he took the reigns and opened school as the top administrator for the very first time in his career.

Aycock said he felt the closeness of family upon his return….seeing familiar faces at Ridgecroft such as Jerri Taylor, Doug Cobbs, Margaret Newbern and Jenks Johnson.

As he rides down Main Street in Ahoskie, he recalled the exact spot where his mother, Kae, owned and operated Repeat Performance, a consignment children’s clothing store. It was a life, a time, a place he thought would continue, but as it is in the real world, especially in the field of educational administration, opportunity is just a phone call away.

The family moved to Richmond, where Dr. Aycock, now at age 65, remains in the Headmaster’s office at Trinity, from where Chris graduated in 1999.

Following high school, Chris attended East Carolina University where he graduated in 2004 with a degree in Communications. Later, he enrolled in the Masters of Education program at Virginia Commonwealth University in Richmond. Aycock said he would transfer those credit hours to a similar program at ECU where he will continue to work towards his Masters degree.

Aycock’s first job in the real world after graduating from ECU was not in the field of education. He chose a different career path than his father by joining the ranks of James D. Klote and Associates, based in Falls Church, VA. That firm specializes in fund raising for churches and schools.

“That job led me to travel up and down the East Coast where I lived in different areas for six months or so and then moved to the next project,” he said, recalling such “stops” in Alabama, New Jersey, North Carolina and Maryland’s Eastern Shore.

Aycock said he enjoyed the job, but, “After nearly two years of travel and living out of a suitcase, I needed a change in lifestyle.”

He switched careers, this time following in his father’s footsteps by joining Trinity Episcopal School as its Alumni Director.

“That was right up my alley,” he said. “It was a job at my alma mater and allowed me to return to Richmond.”

Over time that job took him to the position of Assistant to the Director of Development at Trinity.

After five years at Trinity, Aycock said he wanted to move up the ladder, thus taking a position as Director of Development at Ware Academy, a K-8 school in Gloucester, VA.

“That job appealed to me not only professionally, but because my wife’s (Anne) family is from Gloucester,” Aycock said. “It was a good opportunity to head-up the Office of Development and we remained there for two good years.”

His next climb up the educational administration ladder also had a special place in Aycock’s heart as Ridgecroft came calling.

“Ridgecroft’s Board of Trustees contacted me earlier this summer to see if I was interested in the hHeadmaster’s position,” Aycock said. “I knew my career goal all along was to become a Headmaster. “I didn’t expect for it to happen this soon, but the great thing about independent schools is that there are a lot of different avenues to get to the same place.

“I have fond memories of Ridgecroft,” he continued. “It’s a good school with a family atmosphere. I love eastern North Carolina and we still have family and friends here locally. It was not a hard decision to make.”

What made the transition even easier was that Aycock completely understood the rural environment he was about to enter.

“It’s great living here again,” he noted. “It was great walking in here the first day and seeing all those familiar faces. Plus there are so many parents out here now who were students when I was here. I feel like I’ve been here for a while, even though I just recently returned.”

Even though many believe that the Roanoke-Chowan area is in the middle of nowhere, Aycock isn’t among that group.

“Anne and I talked about how we’re in close proximity of anywhere we want to go….it’s a two hour trip or less to Raleigh, Richmond, the Outer Banks and even for her to take a short trip to her native home for family visits,” Aycock stated. “If I want to go to Greenville for a football game or other event, it’s a one-hour drive. If I want to go to Lake Gaston, where we have a place, it’s an hour and a half. It’s very convenient from here to reach any destination that we want to travel.”

Aycock said he was also impressed with the number of young couples living and working in the Ahoskie and Murfreesboro areas.

“We’ve been able to reacquaint ourselves with a lot of my childhood friends and their families, plus meet some new ones everyday,” he said.

As he begins his career as an educational administrator, Aycock has the best “coach” in the game.

“Growing up on this campus and Trinity’s campus and having him at home, I’ve watched a Headmaster at work for 30 years,” he said of his father. “You learn a lot about how to treat people and the best way to work with people. He taught me a lot about the right and wrong way to handle situations; how to handle students, parents and faculty.

“We have a lot in common about our views on life, particularly on what it takes to make a school a family,” he continued. “That’s what all small schools need to be – a family. That’s what I want Ridgecroft to be. People feel like they’re part of something special at small schools – from the time they enroll in Kindergarten to the time they walk across the stage to receive their diploma, and even beyond that in an alumni role.”

Aycock was aware of the important role of alumni.

“Without that support, you have no school here,” he stressed. “We have a solid base of alumni, a lot of former students here are now parents with children of their own here.”

He also praised Ridgecroft for broadening its diversity, not just across racial and social lines, but by promoting itself as a school that welcomes people from all walks of life and even those from foreign lands.

“I want to continue to grow that aspect,” Aycock stated. “This year I’ve seen us expand our foreign exchange program from two to four students and I want to grow that as well. That increases the sense of the world for our domestic students. It makes them aware that there’s more to life than what they see here in northeastern North Carolina.”

As far as what goals he has for Ridgecroft, Aycock has already launched one by revamping the school’s Honor System by developing a Student Honor Council (comprised of two seniors and one junior, sophomore and freshman). He said they will lead the effort to educate their peers on the issues of lying, cheating, stealing and bullying.

“I added bullying because it’s a problem across the board at schools throughout our nation,” he said. “Having our students involved in the overall Honor System will lead to its success. Having them involved opens up the process.”

He also plans to reinstate the National Honor Society program at Ridgecroft, keeping the Beta Club as well.

“The National Honor Society looks at the whole student, not just their grades; they’re a leader on and off campus,” Aycock said. “It will get our students more involved within the local community and that’s where I want to see them.”

Other items on Aycock’s radar screen include increasing enrollment, campus improvements and a building project, to possibly include a new classroom building and/or student center.

“You always strive to improve by pushing your school to higher levels; that shows progress,” he concluded. “I’m looking forward to this year and beyond.”

The Murfreesboro Fire Department recently added a new brush truck to their fleet of emergency vehicles. Pictured from left are... read more