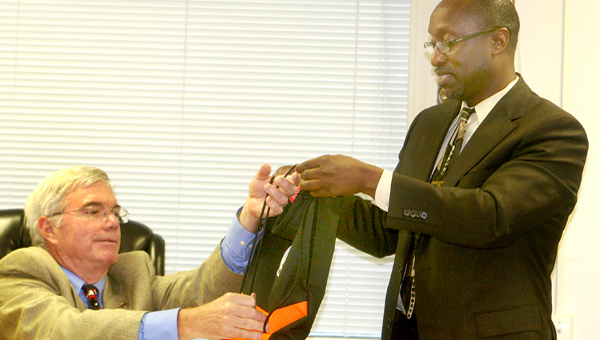 Monday night, Mobley appeared before the Hertford County Board of Education to present “Sack Packs” for students of the school district.

The representative said she learned the program about from a fellow legislator. Mobley said the National Foundation of Women Legislators and Office Depot work together to provide the program.

“This was the seventh year,” she said. “It was the first year I learned about it. When I got the call, I was anxious to go so I went to Raleigh to see what it was they had to give away for our counties.”

“When I first heard the number, I called and said 300 wouldn’t even start in my district,” Mobley said.

She said she asked for at least 400 to give out just in the 5th District, but that it wasn’t possible because they had already been promised for this year.

“I put in my bid for next year to be a part and to get at least 400 bags that I can get distributed,” she said. “I didn’t end up with half of what I expected or hoped to get, but believe me, I got more than anyone else in the room.”

Mobley also added notebooks herself to the supplies. She said the bags were to be used for academically challenged students in grades Pre-K through fifth who may not have had a book bag.

“This year we were able to get only a very few, but hopefully next year I’ll be able to get more,” she said. “I have distributed equal amounts throughout the district. Every county got the same amount of bags.”

Mobley said she would do whatever she could to help the school district and asked them to call on her if they needed her help.

School board chair David Shields expressed the group’s gratitude for Mobley getting the bags to the district and her help.

“Once again thank you for coming and thank you for fighting for those book bags,” Shields said. “We also need you to fight for public education because it is under attack from every corner. We appreciate what you’ve done in the past and we hope you will continue to fight for us.”