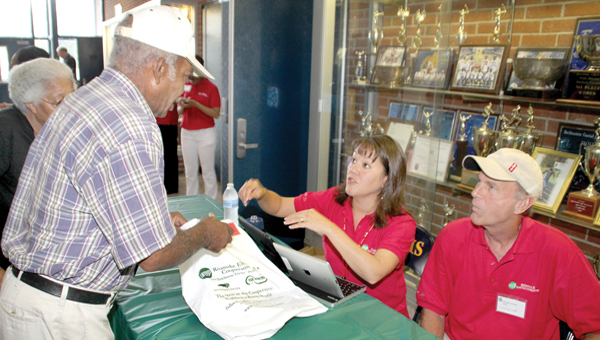 AHOSKIE – Gas, groceries, gemstones…. name any item you’ve recently purchased and there’s no doubt it has increased in price.

“It seems like the cost of everything is going up. Unfortunately, our industry is not immune. The cost of doing business and supplying electricity to you is rising too,” Wynn told a large gathering of REC members.

Wynn stressed it was REC’s mission to deliver reliable, safe and affordable electricity to its members, and to do so at the lowest possible cost.

“Roanoke Electric is working hard to keep these costs down, but there are several issues far beyond our control that are having a direct impact on your electric bills; now and for years to come,” he said.

Specifically, Wynn addressed what is causing REC’s costs and the members’ rates to increase; what REC is doing to manage these costs and maintain the quality level of member services; and what everyone can do about the rising costs.

Wynn, in answering the first question, said combinations of the three areas are the reasons for cost increases within the industry: aging infrastructure, new regulations, especially from EPA, and grid modernization efforts to meet changing consumer needs and expectations.

“Utility infrastructure has served us well for many decades, but nothing lasts forever,” he stressed. “Your electric cooperative has done a good job of keeping our part of the grid – the electric distribution system – well maintained and up-to-date. But other parts of the grid – namely transmission systems and generating plants – need to be modernized or replaced. And of course, the need to use renewable sources of power to protect the environment is an important part of this scenario as well.”

Wynn added, “Furthermore, although the infrastructure built decades ago was adequate at the time, we now live in an age of more information instantaneously. This increased demand on the electric system has pushed utilities to add new infrastructure and software on top of basic infrastructure changes.”

In regards to government regulations, Wynn stated they have gotten tighter and the timeframe to comply has gotten shorter, forcing electric companies to replace or add facilities and equipment on an accelerated schedule, which increases costs.

“As new laws and regulations are enacted, we are being told to quickly upgrade an electrical system that has taken us 75 years to build,” Wynn noted.

He added that Electric Cooperatives across the nation are making investments in technology that will better meet members’ needs for and expectations of instantaneous information.

“Meeting these challenges is complicated by the short timeframe to implement the necessary changes to our infrastructure, as well as doing it at the same time that countries like China and India are growing and demanding more of the commodities we need and at a time where prices for construction materials and utility equipment are rising swiftly,” Wynn stressed.

He said that REC purchases wholesale power generated from power plants fueled from nuclear, coal, hydro, and natural gas resources. Generators of these fuels are also experiencing upgrades and modernization, he said, which increases the cost passed on to the consumer.

Additionally, as required by North Carolina law, REC is including renewable resources like solar and landfill gas facilities. Wynn said these resources are typically more expensive and are limited in the local area.

“We have invested in new technologies and data management software that results in system efficiencies to provide consumers with more value and meet consumer expectations, and these investments will provide positive outcomes for both the cooperative and consumer members over time,” Wynn stated. “Unfortunately, due to the magnitude of the changes and their associated costs, we have found it necessary to closely examine our costs to determine how your rates will be impacted. The preliminary results of a recent cost of service and rate design study show the need to implement a retail rate adjustment in October of this year.”

Wynn said once the study is finalized and approved, REC will communicate more details about the amount of the adjustment.

Shifting his focus, Wynn offered remarks on how REC members can soften the blow of rising electric costs.

“For the past several months your board of directors and member services/marketing employees have joined me in hosting a number of local community forums to talk about the message I’m bringing you today. We have been very forthright about what we know about the future rising cost of electricity,” Wynn said.

He continued, “We know how rising electricity costs will impact your family budgets. Knowing this, your cooperative, through our non-profit subsidiary organization –  The Roanoke Center – has implemented a major effort to help as many of you as possible start the process of making your homes more energy efficient, which will lower your kilowatt hour consumption and lessen the impact of higher electric rates.”

To date, REC has conducted 15 forums that have been attended by 635 individuals. As a result of these and other outreach efforts, REC has performed 314 energy audits and assisted with 44 home improvement projects to make members’ homes more energy efficient, causing them to use less electricity.

“We have found in many situations, energy savings are possible without doing home improvements. Simple behavioral changes normally can result in pretty significant savings within the home,” he noted.

When needed, home improvements can make a big difference. Normally home improvement projects cost money. Even though they will result in energy cost savings, REC has found that many of its members are not able to afford to invest in their homes as they should.

“For those members who qualify, we’ve been able to help them get financial assistance through our non-profit to move forward with the changes. Over $653,000 in grant funds have been used to assist our members,” he said.

Members who don’t qualify for grants have taken advantage of other financing options that are available through REC’s affiliate organizations to pay for the cost of home improvements. In many cases REC is finding that the money saved on electric bills after the improvements are complete exceeds the cost of the loan payments.

Another way to help control costs is by lobbying state and federal legislators to look out for the best interests of REC members.

“We are fortunate to have state and federal representatives who understand and support the challenges we face as an electric cooperative. We can call on them when issues arise that will impact you,” Wynn said.

“For years, local cooperative employees and board members across the country have been encouraged to contribute money to cooperative political action committees, also known as PACs,” Wynn continued.  “These PACs raise money to help elect and re-elect state and federal lawmakers, those and only those who support the needs of electric cooperatives and who are willing to fight against threats that will impact our members –such as regulations that cause your utility bills to increase.”

To help fund the PACs that support electric cooperatives, REC began encouraging its members last year to get involved with its federal ACRE PAC through an initiative called COPA (Cooperative Owners for Political Action).

“Our membership numbers are growing, but we need more involvement,” Wynn stressed.

The cost for COPA membership is just $25 per year. REC makes it easy to participate by simply adding $2.08 to each monthly bill to cover the cost of that membership.

In closing, Wynn reminded his audience that REC strives to assist its members as well as supporting the communities it serves

“We are here for you,” he said. “If you haven’t already, take advantage of the resources we’ve made available to you. The resources are many… free energy audits, our cooperative connections discount card, pay-as-you-go metering, access to financing options to assist with home renovations, advice on energy saving tips, assistance in finding qualified contractors to do renovations and repairs at your home, green power options and many more.

“We are here for you in our communities also….working with other community leaders such as chambers of commerce and economic development organizations to create jobs and to boost the economy, supporting our area non-profits, fire and rescue squads, schools, local governments and others who want to improve the quality of life in the Roanoke-Chowan region.”

Saturday’s annual meeting marked the official kick-off of REC’s 75th year of service. The co-op has planned a number of events over the next several months that will culminate on Sept. 27, 2013, just three days before its official 75th birthday.

As part of the annual meeting, REC members approved several items of business, including the reelection of three incumbent members of its Board of Directors – Carolyn J. Bradley of Jackson (District 3); Robert “Nat” Riddick of Ahoskie (District 4); and Darnell E. Lee of Windsor (District 7).

The meeting also included a Kids Carnival, a question and answer table which gives members the opportunity to make inquiries and a survey of the food and program, the awarding of several door prizes, and a catered lunch.