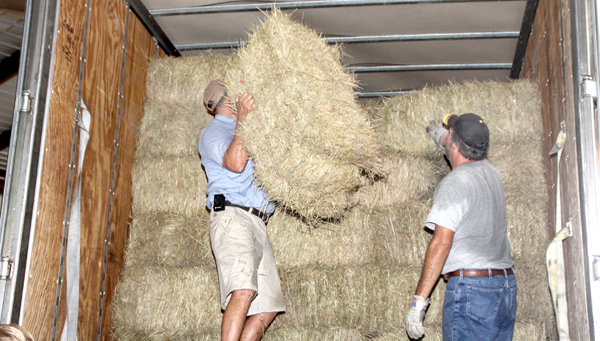 George Michael Bradley (left), an employee of the Ahoskie Wastewater Treatment Plant, adds another bale to the stack while assisted by Frank Senkinc, the truck driver for Convoy of Hope. The bales are bound for the Midwestern U.S. to assist drought-stricken farmers there. Staff Photo by Cal Bryant

Looking in all directions from the plant were fields of tall, green grass…..a sign of an ample supply of moisture, both from treated affluent and from a season of above-average rainfall. Perhaps that abundance of H2O was a sign from the heavens to help those who have spent a bone-dry spring and summer in America’s heartland.

On Monday, Ahoskie’s team of treatment plant employees spent the better part of the morning loading 630 bales of cut grass onto an 18-wheeler, one bound for Missouri, one of the areas where Mother Nature has been noticeably absent.

“We have an overabundance of grass bales and there are farmers out in the Midwest that are sorely lacking that commodity to feed their livestock due to the drought there,” said Stewart White, Superintendent of Ahoskie’s Wastewater Treatment Plant.

“We’ve had more than our fair share of rain this year, leading to the grass in our WWTP spray fields growing much faster than normal,” Ahoskie Town Manager Tony Hammond said. “When Stewart approached me with the idea of donating those excess bales to the farmers in need out in the Midwest, I thought it was a great idea.”

White, however, did not take credit for that idea. He said it all started with a pair of Bertie County men – J.T. Hoggard of Colerain and Gerald Waters of Powellsville.

“J.T. had a connection with a group out in Missouri….Convoy of Hope,” White noted. “He and Gerald decided to go together and donate hay to the cattle farmers affected by the drought and he asked if the town wanted to participate.”

“They agreed this was a great cause and wanted to help,” White remarked. “Convoy of Hope set up everything through J.T. and arrangements were made to send a truck here to Ahoskie from Springfield, Missouri. The truck arrived Monday and we filled it full of hay bales.”

White added he felt blessed to be able to help those in need.

The majority of the states of Kansas, Oklahoma and Arkansas, as well as major portions of Nebraska and Missouri are under exceptional drought conditions, the most severe classification on the U.S. Drought Monitor.

The National Climatic Data Center reported this is the largest U.S. drought since the 1950s. The typical “grain belt” of the United States will see a dramatic drop in annual yield; farm ponds are nearly void of water and even the mighty Mississippi River is seeing its lowest levels in years, so much to the point where sections of the famous waterway are closed to barge traffic.

“It’s the worst I’ve ever seen,” said Frank Senkinc, the Convoy of Hope driver who made the trip from Missouri to Ahoskie to accept the donation of grass bales. “The farmers are really suffering from this drought.”

From his Convoy of Hope office in Springfield, Field Services Coordinator Ryan Grabill works the phone and by email to solicit donations and dispatch the drought aid to points where it’s most needed.

“It’s been a busy year for us, the tornado season, the wildfires out in Colorado and now this persistent drought,” Grabill said. “We’re working with all our partners, including Mr. J.T. Hoggard there in your state, to build up an inventory of hay. Then we work here in Missouri with our state agriculture officials to get the hay delivered to the farmers.”

Echoing Senkinc’s comments concerning the severity of the Midwestern drought, Grabill added, “You can drive hundreds of miles from here in all directions and see nothing but parched land….there’s nothing green.”

Founded in 1994 by a California businessman and his brother, who themselves grew up in poverty, Convoy of Hope is a faith-based international humanitarian organization. Its mission is to provide emergency assistance and long-term solutions through Children’s Feeding Initiatives, Disaster Response, partner resourcing and Community Outreaches.

Strategically based in Springfield, Mo., the crossroads of America, Convoy of Hope is able to quickly dispatch its fleet of trucks from its 300,000-square-foot warehouse to provide immediate assistance to those who need it most.

For more information or to find out how you can help, visit www.convoyofhope.org.